Since its inception, Porsche has been heavily involved in motorsport. From the Type 64 “record car” to the modern variations of the 911, some of the most epic racing machines of all time have been developed by the Zuffenhausen-based company.

One of the most exciting decades of Porsche’s highly-successful motorsport history was the 1980s. During those years, the manufacturer won the famous Le Mans race seven times in a row, contributed to McLaren’s dominant run in Formula 1 with the TAG TTE P01 twin-turbo V6, and surprised everyone by winning the famous Paris-Dakar rally raid twice.

But few know that the company’s initial plan was to enter a four-wheel-drive version of the 911 into the World Rally Championship’s (WRC) premier Group B. However, regulations required carmakers to build street-legal homologation models and by the time Porsche developed both the rally and the road-going versions of the 959, FIA pulled the plug on Group B rallying, so the car ended up competing in the world’s most grueling rally raid.

While both versions of the 959 became automotive icons, the rally program also gave birth to a couple of unconventional vehicles that have been long forgotten. The first was the Porsche B32, a Volkswagen T3 van powered by a Carrera six-cylinder, while the second was a Mercedes G-Wagen with a Porsche V8 under its hood.

Both came into being to fill the need for practical support vehicles for the 953 and 959 rally cars. The van was the first and it served its purpose as part of a small fleet on less-challenging parts of the desert, whereas for more difficult terrain, Porsche ended up knocking on the door of its crosstown rival to borrow a four-wheel-drive 280 G.

After winning the 1984 edition of the Dakar, Porsche was set to go back for the 1985 edition. This time, they would introduce the new 959 -albeit fitted with naturally-aspirated engines from the previous 953. Three cars were entered into the race and backed up by a stock-powered Merc. Unfortunately, all three cars were forced to retire, and among the most nagging issues encountered during the campaign was the G-Wagen’s inability to keep up with the racers. 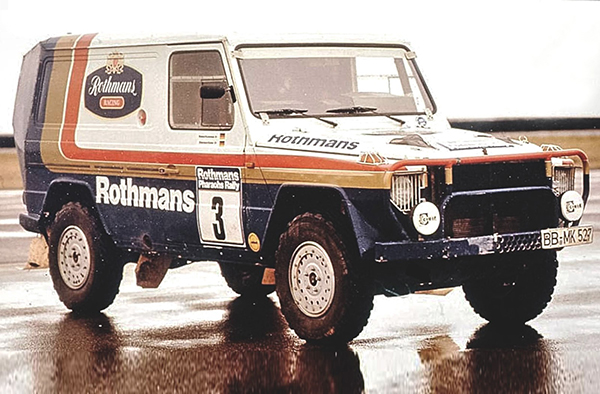 A year later, the team got ready for another run, and with the twin-turbo 959 engines now ready, everyone was confident that an overall win was on the horizon. Moreover, lead engineer Roland Kussmaul decided to give the G a proper upgrade, swapping its modest 155-hp, 2.8-litre, inline-sixes with a 320-hp V8s taken from a 928 S4.

But, before entering the 959s into the Dakar rally, the team took two cars to Egypt where they took part in the Rallye des Pharaons. Although considerably shorter than the Dakar in terms of distance, the event took place on similar terrain, so it was deemed perfect to fine-tune the racers.

Unfortunately, shortly before the start of the rally, one of the 959 driven by the legendary Jacky Ickx was engulfed in flames and by the time the fire was extinguished, the car was completely destroyed.

With only one functional car and two spots on the grid, Kussmaul decided to enter the Porsche-powered G into the race and drive the thing himself. Even more impressive, he managed to finish the rally second overall, behind the car that the G-Wagen was meant to support.

Known internally as Porsche im Schafspelz (or Porsche in sheep’s clothing), the V8-powered G with its awesome Rothmans livery and Porsche badges on the sides returned to service vehicle duty for the Dakar rally. Two 959s finished the event first, and second, but sadly, the G-Wagen was now the one that broke down. Kussmaul, who drove a third 959 in the event, ended up turning it into a service vehicle for the other two cars. Even if he had to carry as many spare parts and tires as the car could accommodate, the engineer still managed to finish sixth overall, proving just how good of a racer the 959 was.

Today, the famous Porsche im Schafspelz is alive and well. Partially restored, it’s part of the Porsche Museum collection and takes center stage in the facility when the company celebrates its Dakar victories.