Today we see how Mercedes’ New 1,000hp Super SUV does against a 1967 Farmall 1206 Tractor + more stunts. It’s already handled 100ft jumps, excessive suspension stress, powertrain abuse, being dropped through a house. Thanks to Dawson County Sheriffs Office for pit maneuvering us, Atlanta Motorsports Park for letting us use their track, and Justin From Atlanta Custom Wraps for being our tour guide.

Cody Detwiler, famous on YouTube as Whistlin Diesel, has built a reputation on the platform by being different. While other car influencers might take pleasure in showcasing the aesthetics and performance of a Lamborghini, Cody will take a mullet and break the rear window.

Despite how gnarly some of his stunts get, his theatrics have garnered an immense following on the platform of more than 4 million subscribers. On a previous upload, he crushed an R32 Nissan Skyline GT-R with an excavator, a stunt that potentially rubbed the rare 90s sports car fan base the wrong way.

On a recent upload, the YouTuber, with the help of the Dawson County Sheriff’s Department and Atlanta Motorsports Park, demonstrated what could happen if you got pit maneuvered by a Police car – in an off-roader.

Getting tipped over by a police car isn’t new on the internet. Thanks to Hollywood and Live News broadcasting, it’s not anything to lose sleep over. However, getting pit maneuvered in a $260,000 Mercedes-AMG G 63 is something you don’t see every day. 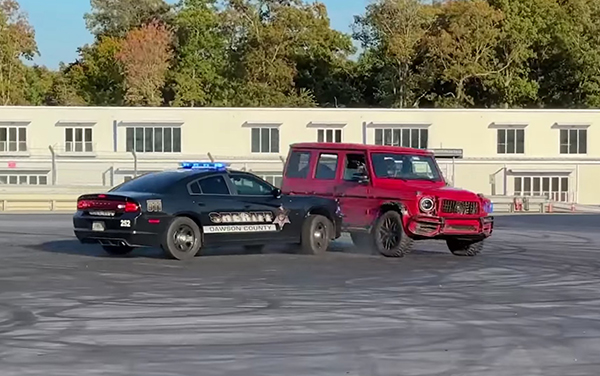 After a couple of durability tests on the G-Wagen that included ramming through a raceway barricade and a tag of war episode with a diesel tractor, Cody and a deputy in a police Dodge Charger took to an isolated section of the raceway for the pit maneuver stunt.

As cringe as it is watching the G-Class getting knocked down ‘just for show,’ it was impressive how easily the Police Charger took down the 6,000 lb (2,722 kgs) all-wheel-drive vehicle on the first attempt.

They also did a demonstration with the canine unit, and the YouTuber witnessed first-hand the brute force of a Belgian Malinois’ bite grip.

Cody has had a couple of run ins with authorities in the past due to his stunts. The demonstration at the Atlanta Motorsports Park is a sure sign they’ve patched things up.