Hello and welcome to another episode, In this one we find ourselves at what can only be described as Awesome!!! G WAGON GRAVEYARD haha, yeah okay not to everyone’s taste but we can’t please everyone,! The ultimate bad mans whip, Shame to see them all this way, now i’m certain there not being neglected so to speak im guessing they break them?? But who knows, Now there’s not a whole lot to see and i ran out of footage quite fast, plus having cameras on me i couldn’t stay around too long so its a short video unfortunately, Also the person asked me to blur out the reg on every car, well lets just say i tried, The editing software i use its almost impossible to blur out everything as its quite frankly SHIT!!! So you will see glimpses of reg numbers i’ve blurred so in my opinion a pointless exercise as reg details cannot be used to get any information whatsoever as we see vehicle registrations daily hundreds of times, But as i am decent i tried to do what i’m asked.

Junkyards are usually packed with a massive variety of vehicles, ranging from compacts to trucks and including at least one example from every automaker out there. Brand-exclusive graveyards are as rare as they get, but as it turns out, there’s at least one that focuses on the iconic Mercedes-Benz G-Class.

Discovered somewhere in the United Kingdom by YouTube’s “IMSTOKZE,” this place isn’t the kind of junkyard we usually cover on these pages. It’s much smaller and it doesn’t include really old and derelict cars, but it’s home to at least 20 G-Class SUVs. 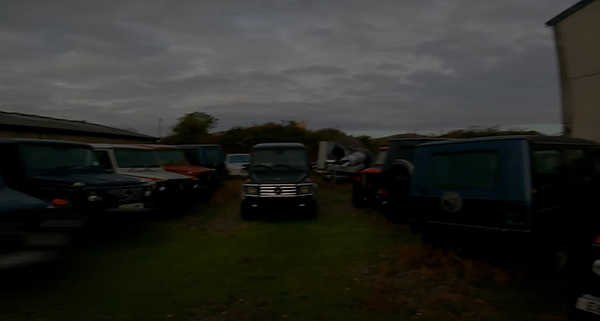 Most of them are still in solid condition, but a closer look reveals they’re missing parts, especially inside the cabin. A couple of them have been dismantled, but some SUVs look as if they could be driven away. Unfortunately, there’s no way to tell what’s going on under the hood and the owner of the place isn’t very keen on sharing information.

But the really cool thing about this collection is that it includes a few older examples. I’m pretty sure I spotted at least a couple of 1980s models, dating from the W460 G-Wagen era. And there are quite a few three-door, short-wheelbase examples too, with the red convertible versions being the most interesting of the bunch. 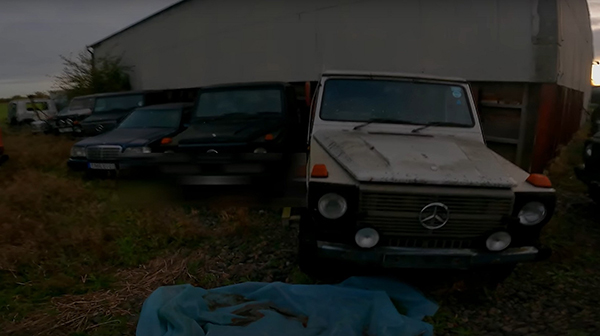 One of them is missing most of its front clip and it won’t drive anywhere anytime soon, but it’s definitely worth saving since you rarely two-door convertibles on public roads nowadays. Not to mention that Mercedes-Benz stopped making SWB variants of the G-Class sometime in the mid-2010s.

Whoever is taking care of this place is obviously a big fan of the company’s boxy SUV, but he’s also storing a few old sedans. The most notable presence is a W114. The four-door shows up at the 8:30-minute mark. It’s in rough shape, but still a cool gem in a sea of SUVs.

This is by far the largest hoard of G-Class models I’ve seen so far. If there’s a bigger one out there, make sure you let me know about it in the comments section below.