The formidable AMG brand has expanded in recent years to include a wide range of high-powered vehicles. With more models than ever under the brand’s umbrella, there are disparities, and that’s no better exemplified than by two models – the AMG A45 S and the G63. Carwow decided to put the wildly different Mercedes vehicles through a series of drag races to see which offers better performance.

It’s an odd comparison – a bite-size five-door hot hatch and a hulking, boxy super SUV – but it piqued our interest because both models power all four wheels. It should be no surprise there are significant differences in the powertrains. The A45 sports a turbocharged 2.0-liter engine that makes 421 horsepower (313 kilowatts) and 368 pound-feet (500 Newton-meters) of torque. The G63 packs a twin-turbo 4.0-liter V8 making 565 hp (421 kW) and 626 lb-ft (850 Nm). There are also the colossal weight and aerodynamic differences. 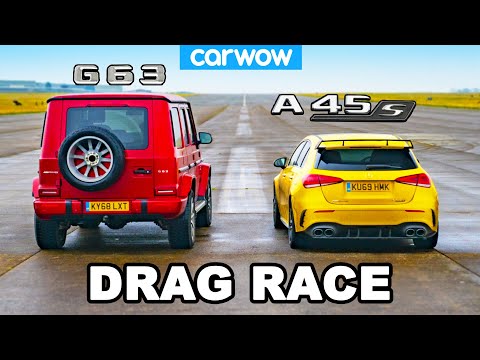 The first race sees the G63 get a sizable lead, though the A45 begins to reel it in as they approach the finish line. It’s not enough to pass the G-Wagen but shows the more powerful G63 can’t walk away from the smaller A45. A second race has the A45 getting a better start, though the G63 still earns a slight lead. However, the A45 again reels it in, closing the smaller gap with ease and taking the lead, crossing first in 12.1 seconds. The G63 completed the quarter-mile in 12.3 seconds. 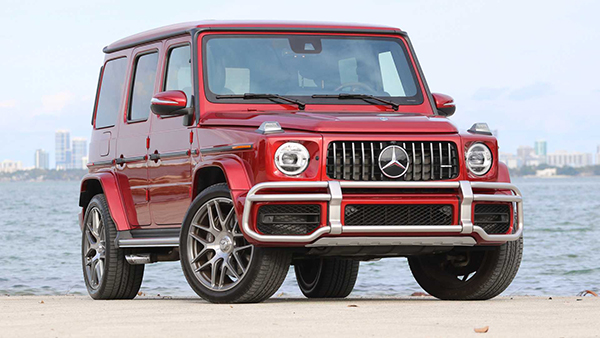 Two rolling races earn wins for the AMG hot hatch before it caps off the competition by winning the brake test with ease. The A45’s smaller size and less weight make up for its horsepower and torque disadvantages. There’s also a vast difference in price between the two. Carwow tested the A45 at £56,570 ($74,715 at current exchange rates) while the G63 had an eye-watering price tag of £146,490 ($192,829).