When two identical cars with launch control meet at the drag strip, it all comes down to the driver’s reaction to determine the winner. Mind you, these two Mercedes-AMG G63s from the current generation are not exactly the same as while the red one is completely stock, the murdered-out G-Wagen has 23-inch Vossen wheels and an aftermarket body kit. The latter likely has an impact on the off-roader’s aerodynamics, and we all know the reputable SUV already has the drag coefficient of a brick.

Carwow’s Mat Watson and YouTuber Yianni got together with their G63s to figure out which of the two had a quicker reaction time in a series of drag races. Rather than settling the dispute with a classic best two out of three race after each won a duel, they climbed onto the passenger seat and let their girlfriends take control of the high-powered SUVs.

The more aggressive-looking G63 was the overall winner, although the red G63 triumphed in the rolling race in third gear from 50 mph (80 km/h) thanks to better gear changes. Not only that, but Mat Watson’s girlfriend also won in the brake test duel despite actually going 10 mph higher than the pre-established 70-mph velocity. 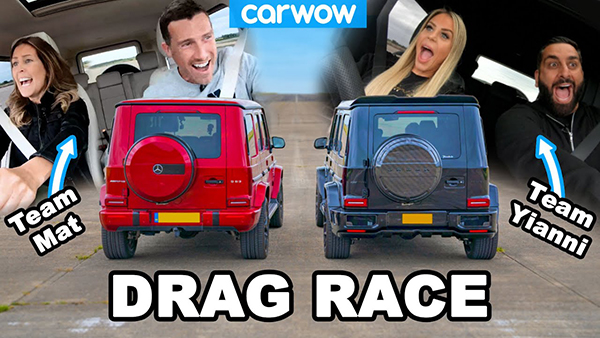 The all-around winner here is the G63 as, despite its boxy shape and hefty weight, it’s still seriously quick off the line. When Mercedes was developing the G-Class in the 1970s, performance at the drag strip was obviously not important as the main goal was to give it exceptional off-road chops. That said, the twin-turbo 4.0-liter V8 engine with 577 hp on tap in the latest G63 enables a sports car-like acceleration, with 0 to 60 mph taking just four and a half seconds.

A quarter-mile run in 12.5 seconds achieved by a vehicle that weighs 5,845 pounds (2,651 kilograms) is no easy feat. Factor in the high level of luxury and tech you’d expect from a Mercedes, it’s no wonder the G-Class is still going strong after more than 40 years.