It’s time for a battle of old vs new! The current Mercedes-AMG G63 is a big, luxury SUV built on an all-new setup – its predecessor, however, was still based on underpinnings established in 1979! Can the all-new – and its 4.0-litre, 585hp V8 – defeat the classic, with its 5.5-litre V8 and 571hp? Join Mat now for a drag race AND some extra challenges to find out!

The Mercedes-Benz G-Class is definitely not the first thing that comes to mind when talking about drag races. That is unless you discuss the top dog G63 variant which has enough grunt to rival some of the hottest sports cars on sale today. In fact, it’s always been like that since the launch of the flagship G and today we have the rare chance to compare the two generations of the G63 – the old one and the new one.

Carwow’s latest drag video puts against each other a 2019 G63 against what appears to be a 2018 model. The differences between the two are huge – the old model has a 5.5-liter twin-turbo V8 under the hood with 571 horsepower (426 kilowatts) and 553 pound-feet (750 Newton-meters) of torque, mated to a seven-speed automatic gearbox sending power to all four wheels. 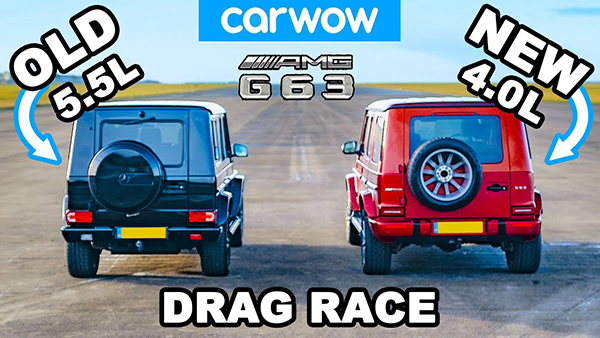 Of course, we are not going to spoil the results of the race for you. Take a good look at the start of the drag race – the two Gs are quite similar off the line but then everything changes for the rest of the chase. There’s also a very, very interesting brake test right after the standing-start and rolling races.