Believe it or not, I don’t harbor too many strong automotive opinions. That probably sounds funny, considering I contribute to this fine website for a living, but it’s true. I like the Volkswagen GTI, I don’t like cars that are too stiff, and that’s about it. Otherwise, I’m willing to hear the opposing point of view. Except for the Mercedes G-Class. 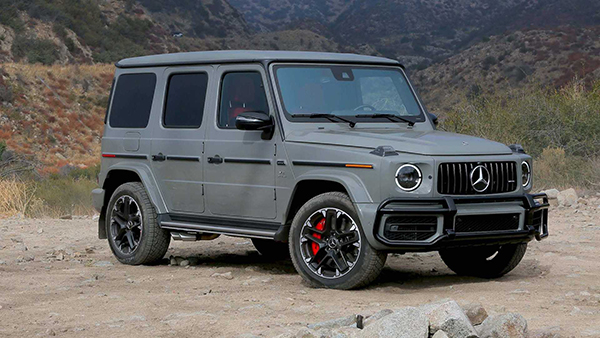 I’ve never been a big fan of the G-Wagen. It’s not that I mind the car itself – it’s a capable, purpose-built monster – but I dislike what the car became after getting involved with pop culture. Growing up in LA, I saw pristine Benz SUVs loaded with groceries at Whole Foods or driving away from a workout at Equinox. And although I can’t prove that those cars never made it off-road, I’d be willing to bet that the only dirt their tires saw was the mud on the road after a downpour in Hollywood Hills.

LA is home to many G550s, but it’s practically the US capital for the AMG G63 variant. These often come packing high-performance summer rubber and aftermarket 22-inch wheels, which means sacrificing off-road ability for on-road confidence and style. But speccing a G-Class like this is the equivalent of buying a purpose-made snowboarding outfit and completing it with a pair of Gucci slides.

Knowing my stance on Mercedes’ boxiest offering, a company rep offered me a go in a new 2021 G63, adding, “You know, this one has the Trail Package. We’d love for you to put it through its paces.”

A quick Googling showed a new 2021 option on the G-Class that may as well be called the Clint Package: $3,050 for AMG Ride Control for off-road use, black skid plates, mud flaps, all-season floor mats, and most importantly, 20-inch five-spoke wheels wrapped in all-terrain tires. Game on. 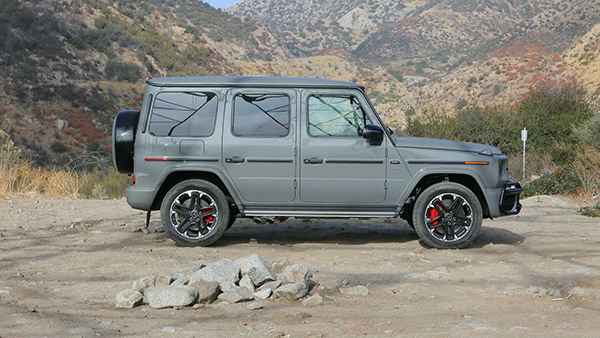 A Built-Up Brick
Caught in the trance of this SUV’s status, people often forget just how capable it is. At over 5,000 pounds, the G63 feels vault-solid, including the most aggressive door-shut noise I’ve ever heard. There’s adaptive suspension that can adjust for sporty driving as well as slow rock crawling. To help with the latter, Mercedes includes a two-speed transfer case with low range and three locking differentials. And somehow that’s not even the best part.

Under the square-shaped hood sits a twin-turbocharged 4.0-liter V8, putting out a frankly ridiculous 577 horsepower and 627 pound-feet. Despite the G’s heft and horrific aerodynamic qualities, it absolutely boogies thanks to this lump of handbuilt internal-combustion goodness. I compared driving this car fast to that of the Indiana Jones ride at Disneyland: tons of nose lift with throttle input, punctuated by substantial body roll when attacking corners. As silly as that may be, it sure is a lot of fun.

With all of the usual AMG driving modes available, the G-Wagen can split its personality to dramatic levels. Everything set to Sport+ means tauter, quicker capability, while the Comfort setting brings a docile driving experience. After getting a few highway onramp blasts out of my system, my focus turned solely to getting this thing dirty and experiencing first-hand if this Trail Package was any good. 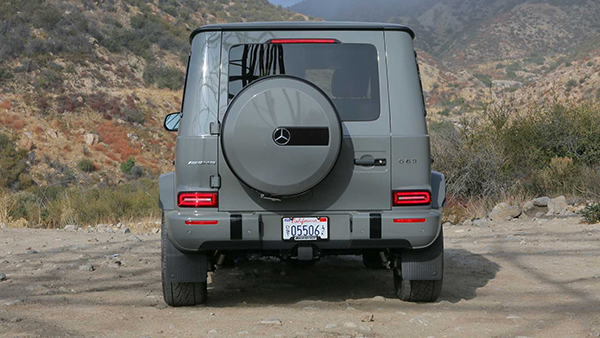 In Its Element
Located roughly an hour outside Los Angeles, the Cleghorn Trail is not the first place you would expect to see a $176,000 custom-painted G63. That became obvious as Senior Editor Brett T. Evans and myself rolled up to the sight of TRD Tacomas and lifted Silverados playing around, with not another G likely within the same ZIP code.

While there are more difficult trails to take on, Cleghorn is a great test for several reasons. Its tight, winding layout is filled with mixed terrain as well as steep shifts in approach angle. We checked the air pressure, locked the center differential, and set off. 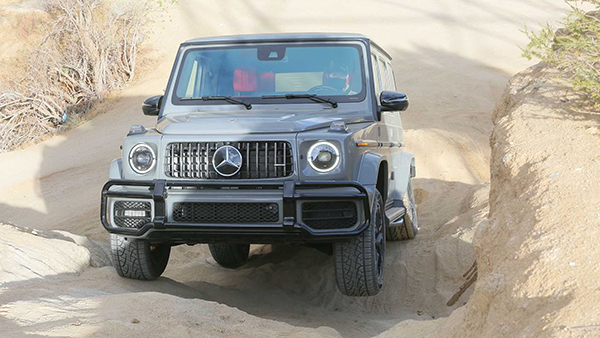 Almost immediately the G63 felt at home. Despite being a high-performance engine, the V8 provided calm, low-end torque to navigate around (and over) obstacles. The automatic transmission is best for snapping off quick shifts when under power, but in this environment, it opted not to upshift unless absolutely necessary. Even the electric steering rack, which is engineered for fast driving, offered great feedback from the ground below. Best of all was the G-Wagen’s short stature, which proved very useful when pushing uphill.

Full disclosure: we traversed one pass (see below photo) with enough vigor to scrape the left corner of the rear bumper ever so slightly. Here’s my public apology for that one, especially to the $6,500 Arabian Grey paint. But other than that small oopsie, the G63 was bulletproof, taking on everything we threw at it. It took 4 hours of aggressive off-roading to reverse years of stigmatized dislike. But sure enough, the Trail Package–equipped G63 was an absolute rockstar in the dirt, and anyone would be lucky to drive one in such a setting. 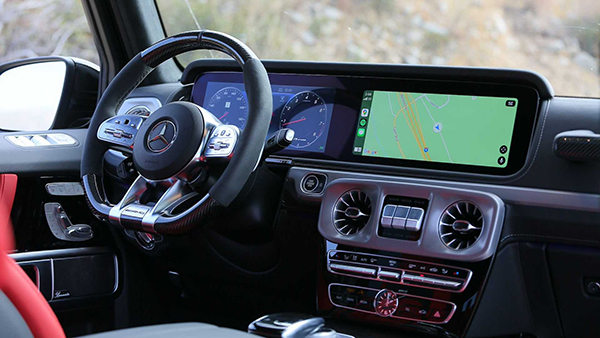 Mixed Emotions
Part of me will always loathe the Mercedes-Benz G-Class as a pop culture icon. But spending a day with it doing exactly what it was built to do was moving enough to change my outlook. I was wrong to hate this car, and I didn’t appreciate what it can do (in the right setting).

To those who are considering stepping up and buying one, I ask of you just one thing. Get the Trail Package and take it off-road – and then park it at Whole Foods.