Mercedes is preparing a ‘mid-life’ facelift for the G-Class off-roader, the firm’s iconic boxy 4×4 previously rejuvenated with a new-generation model designed to keep the shape and stance of the original in 2018. These latest spy shots show us the performance AMG-developed G 63 variant will continue on as part of the facelift, highlighting a few key details changes over the outgoing model. 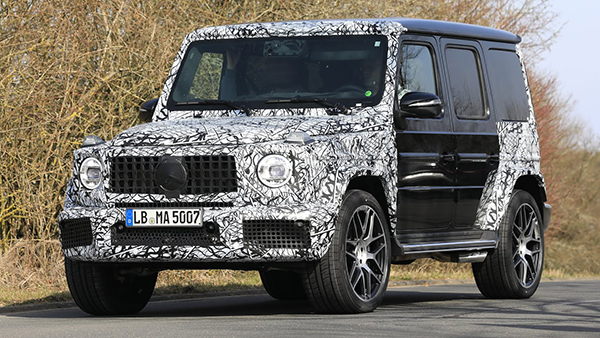 We’ve caught the updated Mercedes G-Class testing in January this year, so we expect it should be set to arrive later this year. It should keep it fresh ahead of the brand’s first electric G-Class – named the EQG – that is due to arrive in 2024.

Since the launch of the current G-Class in 2018, we’ve seen new rivals emerge and old ones freshed in the shape of the new Land Rover Defender (both the regular and V8 model), Range Rover, Audi RS Q8, Aston Martin DBX, and Bentley Bentayga. This is before you look at the new cohort of high-powered electric SUVs like the Audi e-tron and BMW iX, that have the potential to eat into the G-Class customer base.

The amount of camouflage on the test car in these latest spy shots hasn’t decreased since we spied the non-AMG G-Class, so our knowledge of the overall design hasn’t changed. It’s clear the second generation of the German off-roader is expected to remain largely untouched regarding its blocky exterior design. 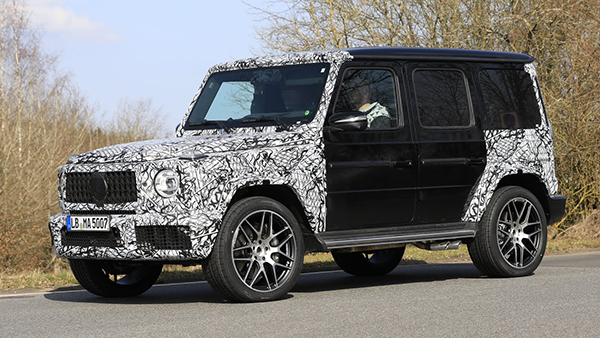 The current generation Mercedes-Benz G-Class was revealed in 2018, featuring many of the characteristics and styling elements from the 1979 original on top of a brand new chassis. It carried over the same boxy shape, the off-roader characteristic door handles, external door hinges and the spare wheel mounted on the rear door, and its level of popularity has never been greater, with over 40,000 sold globally in 2021.

A slight revamp of the front and rear bumpers is expected for this mid-life facelift, and the rear LED tail lights could receive an update too. However, the main changes are expected to occur in the cabin and under the bonnet, especially when it comes to the Mercedes-AMG G 63 flagship model.

The grille of the G 63 will be different to the G-Class and we expect larger air intakes below the headlights. Side-exit exhausts have become a hallmark of the G 63 and we can see them in all their shiny chrome glory here. The wheels are also chrome and on this test car they’re the same 22-inch rims seen on the outgoing model. 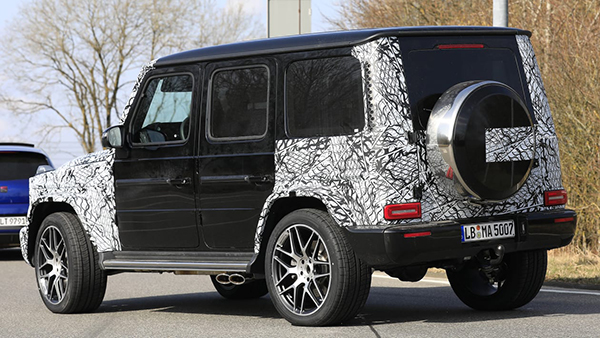 Inside, the interior will finally get the latest version of Mercedes’ MBUX infotainment software, as the G-Class is the only current Mercedes without it.

It is unknown at this stage what other changes will be made but the German marque is unlikely to completely redesign the centre console to accommodate a larger touchscreen like the one found in the latest S-Class, C-Class and SL Roadster, as the G-Glass uses its own, bespoke body-on-frame architecture instead of the new MRA2 platform used by the brand’s passenger cars.

Instead, the focus will be on new software, new functionality, updated switchgear including a touch-sensitive pad in place of the older rotary dial found in the current car, and an updated selection of trims and interior finishes for buyers to choose from. 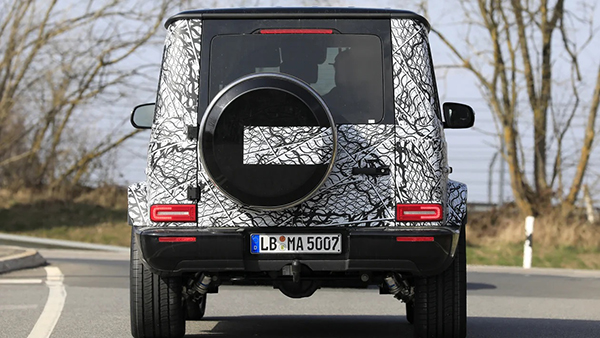 Engines for the UK market will stick with the current offering of a 3.0-litre turbocharged 400d diesel model, and a 577bhp AMG-G 63 version, possibly updated to include the 48-volt mild hybrid version of AMG’s turbocharged 4.0-litre V8, as found in the latest E 63 super saloon.

Mercedes will also use this facelift as an opportunity to introduce a lifted model with even greater off-road ability. Spies have caught mules for a 4×4 Squared variant of the G-Class as far back as summer 2020.

This iteration of the G-Class as we know it could be the last of its kind before the brand’s electric version arrives. The EQG concept was first shown to the public at the 2021 Munich Motor Show and it boasts a refreshed design with some distinct features such as its unconventional square-shaped rear ‘spare wheel mount’.