Mercedes-AMG G63 is an automotive relic that has been kept alive through constant injections of new tech, most notably when an all-new generation arrived in 2019 for the first time in decades. This vehicle has its roots in military service, but in AMG guise, it now finds its home in the garages of rappers, reality TV stars, and other people who appear to be famous for nothing else but being famous. Maybe that’s why the Mercedes-AMG G63’s competitors in the USA include the likes of the BMW XM and Land Rover Range Rover, despite having the off-road clout to take on the Defender V8 and Jeep Wrangler Rubicon 392. 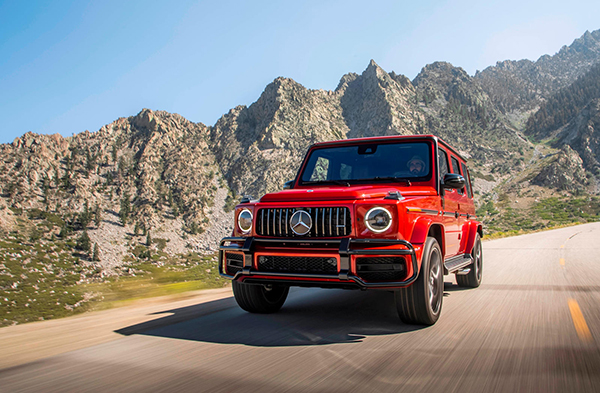 Mercedes-AMG has done an impressive job of turning this boxy brute into a refined luxury SUV, and it has made it pretty quick too. Under the hood, you’ll find a 4.0-liter twin-turbo V8 engine delivering 577 horsepower and 627 lb-ft of twist, allowing this 5,842-pound cinder block on wheels to launch to 60 mph in 4.5 seconds. The exterior is bedazzled with chrome and large wheels, and the interior is one of the most luxurious in its class, but that flashy design hides an SUV that is somewhat quite capable, even if it is ruined by low-profile tires.

2022 Mercedes-AMG G63 Changes: What’s the difference vs 2021 AMG G63?
The main news for 2022 is the introduction of the Mercedes-AMG G63 Edition 55, of which only 55 will be sold in the USA. This special edition features a set of 22-inch AMG cross-spoke wheels, unique graphics, an Obsidian Black paint job, standard AMG Night Package and Night Pakcgae II accouterments, and the AMG crest instead of the usual Mercedes badge, all finished with a unique red and black interior. This model celebrates 55 years of the AMG division. The rest of the features list remains untouched.

2022 Mercedes-AMG G63 Handling and Driving Impressions
When the G-Class first hit the road, it was designed as a hardcore off-road machine capable of acting as a military transporter and medical vehicle, but after years of refinement, it has been turned into a luxury SUV. However, there are a few things the 2022 G63 can’t hide. Its boxy shape adds noticeable levels of wind noise, its high riding position makes it feel wobbly at higher speeds or when making quick changes in direction, and its sheer weight is impossible to ignore when taking corners at speed. The fully independent suspension setup does a respectable job of keeping this monster on the road, and the steering is reasonably direct too. On suburban streets, the ride is compliant and comfortable, and the G63 makes for a solid highway cruiser if you can live with its dismal gas mileage. When it comes to off-roading, the G63 offers locking differentials in the front, middle, and rear and has enough torque to pull it out of most situations, but its road-biased tires and stylish-but-impractical side-exit exhausts let it down.

Verdict: Is 2022 Mercedes-AMG G63 a good SUV?
The G-Class transcends rationality and is the perfect example of buying with the heart and not the mind. Having gone through decades of updates and engine changes, the new Mercedes-AMG G63 SUV is the perfect example of extreme automotive evolution, and despite having some flaws, is still a true luxury SUV with a healthy dose of practicality and all the luxury. That turbocharged V8 engine offers more than enough grunt and fuel economy figures that will embarrass Saudi Royalty. On the road, it feels its size and weight, but it is still a comfortable daily cruiser. The interior is as flashy as the exterior and fit for even the most famous of YouTubers. With the world moving toward electric power, this car’s days are surely numbered, so we suggest enjoying it while you can. The forthcoming electric EQG replacement might have the looks, but it almost certainly won’t have the same presence, a presence that almost entirely negates this review of the Mercedes-AMG G63 for those in pursuit of making an unmissable entrance.