Mercedes-Benz EQE is one of three all-electric vehicles coming to the German automakers’ US lineup this year. It’s got the panache and pizzazz of the larger EQS sedan, but in a smaller, roughly CLS-sized package. While the EQS may be the brand’s electric flagship, EQE proves smaller can be beautiful. 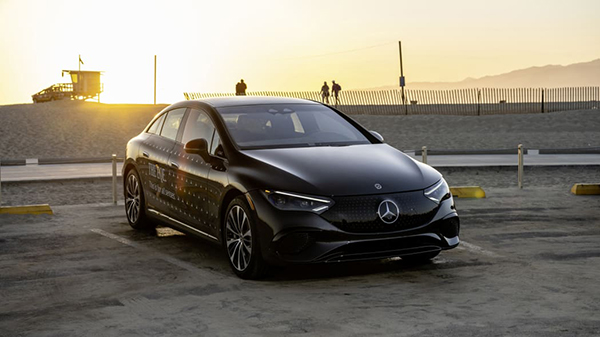 The tricky question for legacy automakers developing their new electric vehicle fleet is how much their EV version should feel like the internal-combustion counterpart. That is especially true with Mercedes-Benz, which is developing its BEV and ICE cars in parallel, with launch dates often within a year of one another. Should the EV feel the same only different, or like some whirring futuristic spacecraft?

In the case of the upcoming Mercedes-Benz EQE – the electric equivalent of an E-Class sedan, but sharing its architecture with the EQS and not the E-Class – the EV nonetheless drives and feels essentially like a silent E-Class. And according to Mercedes product development engineers, that was intentional.

On a 45-minute ride in a pilot-production EQE 350 rear-drive sedan along Pacific Coast Highway from Santa Monica toward Malibu, the hushed, confident propulsion of the 250 kilowatt (approximately 350 hp) electric motor felt as assured as one would expect from a sporty interpretation of a business limousine. With approximately 417 pound-feet of torque, the EQE 350 RWD delivers a 0-60 sprint of 5.7 seconds. That’s basically a full second slower than an E 450 4Matic, but still should be plenty quick for most American midsize luxury sedan buyers. It’s also 0.2 second quicker than the base EQS 450+. 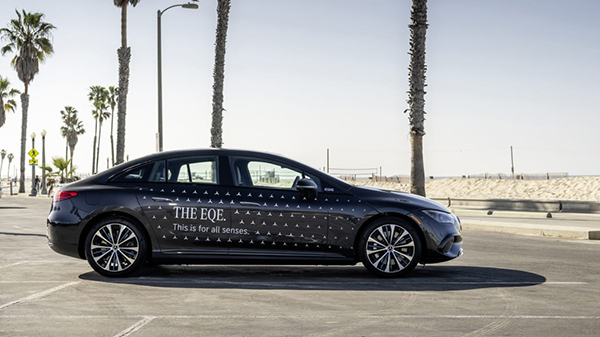 The default operating setting for the powertrain is a blissful quietude. There is no accompanying “whirr” that folks have come to expect from electric vehicles. The loudest aural intrusion at 45 mph is a hint of tire rumble.

“We wanted no whining noise, no nothing,” said Markus Schäfer, Mercedes-Benz chief technology officer. “Lots of EVs sound like a tram. We want ours to be absolute silence.”

In short, the EQE feels solid, a return to the bank-vault cocoon of great Benzes of the past. The pre-production model made only one chassis groan during the entire drive – while taking an undulating corner – but otherwise felt like an ingot. Elon, take note: This is what a luxury EV should feel like. 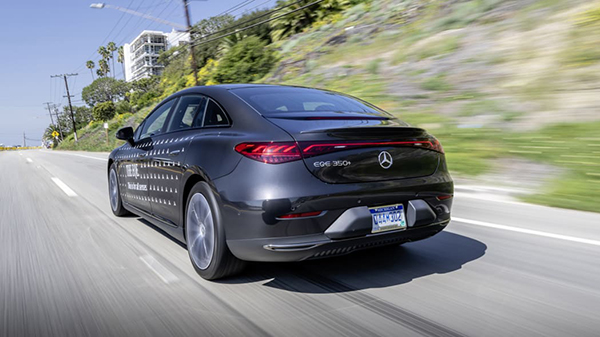 Of course, there are folks who need some sturm to accompany their drang. For them, the EQE offers three faux-noise “sound experiences” to accompany how the car is being driven – including the familiar whirring as well as something akin to an electronic Godzilla at full roar.

What will impress range-conscious buyers is the distance the EQE can cover between charges. Although the EPA has yet to test it, the EQE 350 has a WLTP range of 409 miles (660 km). Note that the WLTP numbers are typically more optimistic than EPA or real-world results. Still, that’s in line with the Tesla Model S, which the EQE should undercut on price. (The EQE goes on sale in Europe in April, and the U.S. in late 2022. Pricing has not been announced.)

But what really will impress most folks is the available Hyperscreen infotainment system. Initially placed in the EQS flagship, this pillar-to-pillar sweep of digital 3D glass seemed like a vision only for the 1 percent. But those in the Mercedes mid-range will get to enjoy it as well. The front passenger can even watch video while the vehicle is in motion; the car’s driver monitor will see if the driver is catching a peek and shut off the video until they return their attention to the road. The screens themselves are almost painfully crisp in their detail. 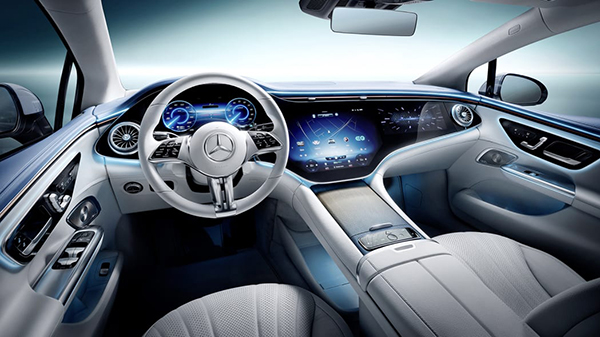 The upgraded infotainment system also incorporates route planning around recharging stops; the augmented-reality map includes charging locations, their in-the-moment availability and charging power, and whether the electricity for the charger comes from a “green” source. The map function is always “on” as the primary center screen; other infotainment options then appear as overlaid tiles. It’s very “Minority Report.”

As our ride was conducted in the waning of rush hour, there was little opportunity for dynamic driving other than the occasional stab of the accelerator pedal. Also, our model came with an optional air suspension and rear-axle steering, so the EQE delivered a lovingly floaty ride in Comfort mode, but felt tamped down and nimble when shifted to Sport mode. (Base models get a steel suspension.) This would be in keeping with our experience in the EQS sedan.

The rear-steering also allows the EQE to have a turning circle on par with the compact C-Class. Our driver – Holger Enzmann, Mercedes’ project manager for the EVA platform – whipped a U-turn on a two-lane residential street with ease. 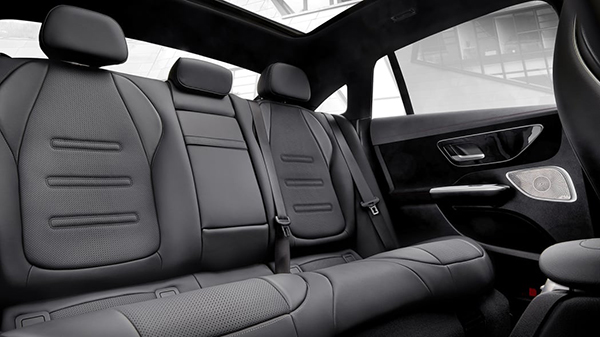 If it’s a business limousine, how about interior space? Mercedes claims there is nearly 3 inches more rear legroom than in the current E-Class. While that may be true longitudinally, the battery pack does intrude into the floorspace – a rear-seat occupant’s hips are tilted upward more acutely in the EQE than in the E-Class, and a cutout into the front-seat footwell barely gains entrance for men’s dress shoes (Lady Gaga will have to kick off her platform stilettos). Second-row headroom is decent for a6-footer, thanks to the roof-glass cutout that creates space in the coupe-like roofline reminiscent of the first-generation CLS.

But unlike the CLS, for which Mercedes designers penned a lengthy hood to boast its luxury-performance credentials, the EQE cabin is more balanced over its front and rear wheels. With no engine to contend with, the dash-to-axle ratio is shortened. Does it negate the visual perception of premiumness? Not really. The EQE’s curb appeal is defiantly Mercedes.

So, should you buy an EQE instead of an E-Class? The inside of the EQE certainly feels progressive and ultramodern, as does its silent propulsion. As a result, while it may carry the Mercedes DNA of the E-Class in its veins, the EQE feels like the future.