As we announced a few days ago, the Mercedes EQE will have all-wheel drive versions in addition to the AMG versions already presented. One of them is the Mercedes EQE 500, which is powered by two electric motors totalling 300 kW (408 HP), thus keeping its distance from the Mercedes EQS 580 which develops 385 kW (524 HP). Both models are built on the same dedicated EVA2 electric platform. “But we designed the EQE to be more dynamic and agile,” explains head of electric drive systems at Mercedes Christoph Starzynski. 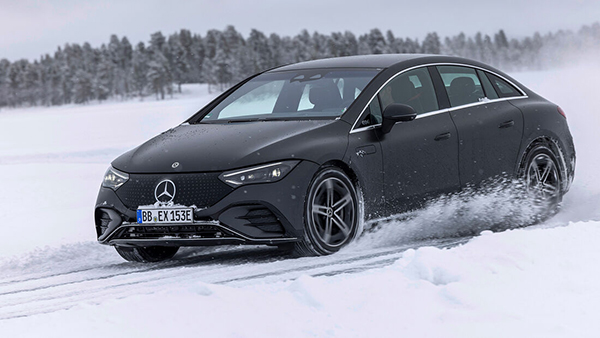 The editor from auto motor und sport says that thanks to the sophisticated electronics, every driver who drives an EQE on snow can feel like Walter Rohrl. But while Rohrl can drive on ice thanks to his driving skills, the EQE’s driver can do the same thanks to the control skills developed by Mercedes engineers. The integral steering also helps to stabilise the car. With ESP deactivated (it’s never fully deactivated) you have more freedom but you also need more experience. After a few laps on the frozen lake we agree with Starzynski. The EQE drives more direct and agile than the EQS.

Mercedes’ decision to hold this test for journalists in such an unfriendly environment for an electric car at -7 degrees can be considered very brave. Starzynski says that “the battery heating was not preconditioned precisely to show how quickly the interior heats up”. After four minutes it’s already warm in the EQE. Like its big brother EQS, the EQE uses a multi-circuit thermal management system that uses waste heat from propulsion because an electric motor also generates heat loss. Using the waste heat from propulsion, a temperature increase of up to 5 degrees can be achieved. Later, the EQE will also be equipped with a heat pump to provide even more efficient and faster heating of the interior. 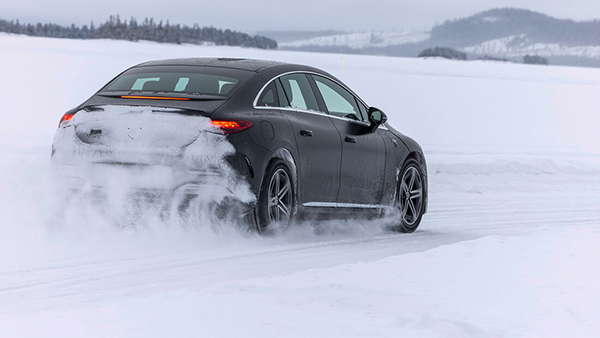 The Mercedes EQE is more compact than the EQS at 4.95 metres in length compared to 5.22 metres. And the wheelbase of 3.12 m is 10 cm shorter but still not small. This helps agility but does not reduce penergy consumption and thus does not increase range. For aerodynamics it is important that the rear is as long as possible. The EQS has a 16 cm longer rear end that guides air better to the rear.

Thus, with a Cx of 0.22, the EQE does not reach the EQS record value of 0.20 but it is still a very good value. Also, although the EQE has a smaller battery by 18 kWh it is not significantly lighter because the EQS has a predominantly aluminium body while the EQE has a body made mostly of steel. With pre-heated interior and in winter conditions the EQE 500 consumed just over 25 kWh/100 km, which corresponds to a range of 350 km. In normal positive temperatures, we can expect a drop in consumption to around 20 kWh/100 km, which means a range of between 450 and 500 km.

Compared to the EQS, the 430 litre boot is 180 litres smaller due to the shorter rear, but in the rear the space offer is almost similar to the EQS. In any case, in the rear, the EQE feels more airy than an E-Class.