Mercedes-Benz is working on a new breed of electric cars which will be based on a dedicated EV platform. The EQA, EQC, and EQV are all nice and capable zero-emission vehicles, but the trio is actually based on existing combustion-powered models. The EQS will be the brand’s flagship green car and will be underpinned by a new architecture, which will also sit underneath this – the EQE.

Think of it as the electric alternative to the E-Class, at least size-wise. As this new spy video shows, it will have a slightly different shape at the back where we see a large hatch creating a liftback profile. Of course, this is still an early prototype with a lot of camouflage and some fake body panels but the overall shape seems to be different from the conventional E-Class.

According to early and unofficial information, the EQE will be slightly shorter than the E-Class but will offer S-Class levels of interior room. Codenamed V295, the EV will be first launched in all-wheel-drive configuration with one electric motor at each axle, with the possibility of a sporty RWD variant to be added later on. 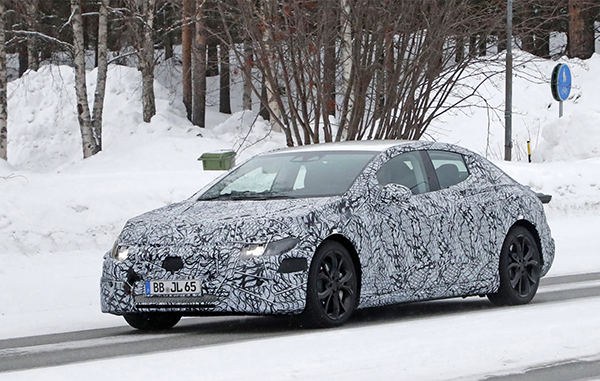 In fact, recent trademark filings suggest Mercedes could be working on a few different versions of the EQE based on its performance and range. Nothing is official, but such a move would make sense given the customers’ different needs when it comes to power. The Stuttgart-based automaker copyrighted the EQE 43, EQE 53, and EQE 63 monikers with the European Union Intellectual Property Office. The latter hints there could be an AMG-developed sports electric sedan joining the regular models.

We expect to see the EQE before the year’s end with sales most likely kicking off in the first months of 2022. The estimated price tag of the all-electric sedan is around $65,000. The EQE will be produced in Bremen.