How much of a mini-me is the new Mercedes EQE against its EQS sibling? They may not look quite like identical twins but they certainly pass as brother and sister – not least in terms of their low-drag, high-efficiency shape and racoon-inspired front-end appearance. 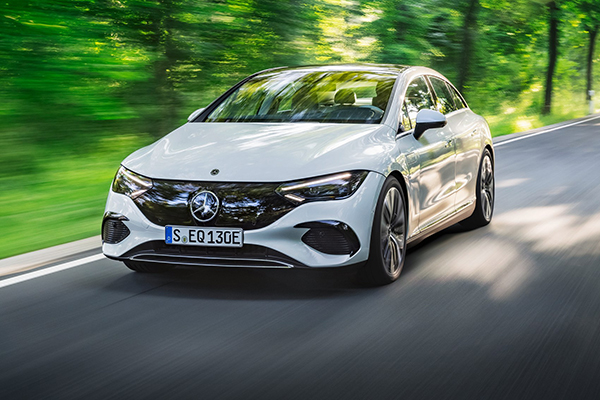 Christoph Starzynski – Merc’s VP for electric drivetrains – is the man at the wheel of the undisguised pre-production test car we’re riding shotgun in. Three months prior to the launch, the Director Electric Drivetrain Integration provides us with first hands-on impressions of the Mercedes which must challenge the BMW i4 and upcoming Audi A6 e-tron, let alone the Tesla Model 3 and Model S. The EQE is his baby, as are the EQS, the Maybach versions and upcoming SUV versions incoming.

Let’s get stuck in, then!
As if by magic, our fully loaded snow-white specimen opens the door as the passenger approaches the vehicle, and automatically closes it once the seat belt has clicked shut. Nice. The highline seat is of the singing and dancing kind: heated, ventilated, generously adjustable and upholstered with a set of g-force defying dynamic cushions, it offers an even wider choice of feelgood treatments than the qualified masseuses who lurk on prey in fancy five-star fitness temples. 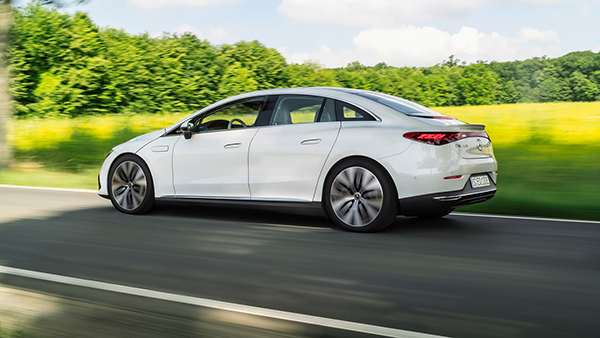 The prime eye-catcher is of course the extra-cost hyperscreen which spans the entire width of the dashboard. Its three essential segments (head-up display, instrument display and main monitor-cum-touchscreen) can be augmented by a passenger-side infotainment centre which lets you play games, watch movies or fiddle with a bunch of secondary controls. Extra money buys other amenities like a large dual sunroof, air suspension and rear-wheel steering, but lingering in the back of the mind are the low-rent plastics on the lower door panels, sills, seat consoles and in the footwell – not ones seen in the EQS.

In terms of space, the EQE’s traditional lidded saloon tailgate means a 430-litre luggage area – a volume entirely eclipsed by the EQS’s 610. Even so, for passengers, interior room is comparatively close between the two – the EQS naturally gains more rear legroom due to its longer wheelbase, but headroom is on par across the two cars.

Is it fast?
There’s no doubt that even the lightest velvety right hoof can at the blink of an eye release oodles of raw forward thrust via that compact 288bhp PSM e-motor. Driving the rear wheels only (a second motor enabling 4Matic arrives at a later stage), up to 391lb ft happily delivers the kind of knockout torque punch only big block American V8s could match not long ago. True, the EQE does not feel as bat-out-of-hellish rapid as a Model 3 Performance, but a similar kick in the butt will be available as soon as the brawny AMG versions hit the road. 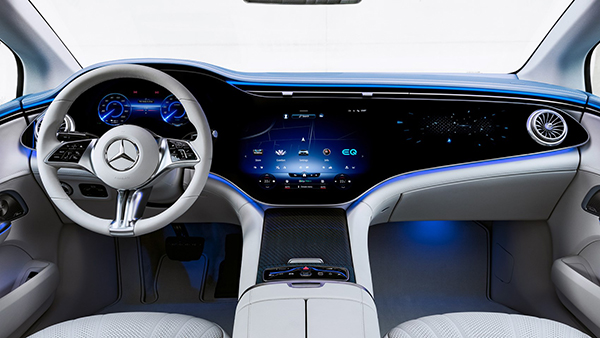 Right now, the entry-level model is more cruiser than carver, fictitiously long-legged despite that humble single-speed transmission, always ready for a harshly implemented non-negotiable 131mph top speed, capable of coasting for miles when the conditions are right, ferociously eager to bare all its LED matrix fangs in Sport plus, prioritizing battery management over performance in most driving situations. You can even change the sound the EQE emits while on the road; those who don´t believe that silence is golden may hit the in-dash jukebox and play one of three signature themes named Silver Waves (Bach goes Techno), Vivid Flux (agitated elevator music) and Roaring Pulse (rattling valves meet a loose exhaust, kind of). For us? Thanks, but no thanks.

About halfway through our one-hour loop northwest of Stuttgart, the pace suddenly changes from wafting to wild. On a straight stretch of empty C-road, the master of ceremony demonstrates the impressive 5.9sec acceleration from 0 to 62mph. And again. Once more? Sure, go for it.

Meanwhile, the boss’s voiceover has moved on to detail the three clearly calibrated recuperation stages which range from the self-decelerating one pedal mode to on-demand free-flow coasting. All it takes to dial in the desired mode is a quick pull of the right steering-wheel paddle. 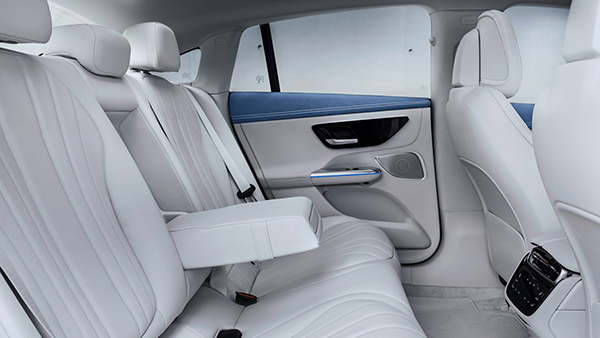 While the ride is in places on the harsh side, the brakes do a fine job ironing out the often critical transition from electrically-assisted to full hydraulic stopping power. Thanks to the fitted rear-wheel steering, the tight turning circle is more C- than E-class. The air suspension presents a convincing blend of cushy compliance, flat cornering stance and nicely controlled body movements.

You mentioned an AMG EQE?
Yes – just announced by Mercedes are the Mercedes-AMG EQE 43 and 53, both with 4Matic all-wheel drive. AMG and EV may be a contradiction in terms, but strategically the high-performance sub-brand is becoming more and more important.