Mercedes-Benz EQE is the second electric model built on the EVA platform and the sixth since the introduction of the EQC in 2019. In the launch version EQE 350 with a single permanent excitation synchronous motor and 90 kWh battery promise an electric range of up to 660 km (410 miles). Production of the EQE will be launched at plants in Bremen, Germany and Beijing, China with partner BAIC. 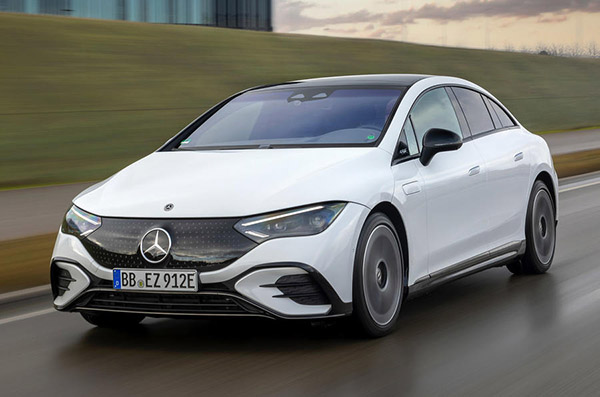 The model tested is a pre-production example. The membership of the EQS family is immediately clear due to the black panel grille, clamshell bonnet, cab forward silhouette and high beltline. Digital Light headlamps are optional but there is no light strip between the headlamps as on the EQS. But the big difference is at the rear because EQE does not have a tailgate like EQS but a classic trunk with a small spoiler on the lid of the trunk and the taillights are joined by a light strip.

The EQE comes with 19 to 21 inch rims and the floor is fully encapsulated, contributing to a very good Cx but no better than the EQS’s 0.20. The final Cx value has not been announced yet. Oliver Rocker, head of EQE development, told Autocar magazine that it will not reach the EQS record of 0.20 but will be better than the E-Class.

The Mercedes EQE is 270 mm shorter than the EQS, 35 mm wider (the EQS has door handles hidden in the bodywork) and has the same height as the EQS but the wheelbase is 90 mm shorter.

When sales start in the summer, only the version tested now will be available, the EQE 350 with a single engine developing 292 HP and 530 Nm. 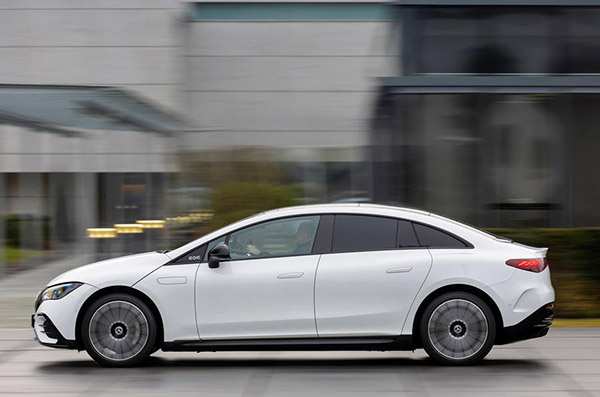 Later, the range will be extended with all-wheel drive versions with two engines and two AMG models. As with the EQS, the gearbox is single-speed and four drive modes are offered: Comfort, Sport, Sport+ and Slippery.

The 90 kWh battery can be preheated or cooled in a preconditioning process that allows it to be quickly charged up to 170 kW, 30 kW less than the EQS. Unlike the EQS, the EQE comes standard with steel suspension but air suspension can optionally be ordered as the test car had.

The interior is familiar from the EQS with its Hyperscreen (optional here), multi-function steering wheel with touch-sensitive controls, floating centre console and wide, excellently configured seats. Underneath the 1.41 m long Hyperscreen glass are three displays, including a 12.3-inch display for the passenger who can watch movies or surf the web on the move. Unlike the EQS, the seat upholstery is stiffer but the quality is as good as in the EQS. Being smaller in size than the EQS, you don’t get the same feeling of space as in the EQS but still the interior length is 85 mm longer than the E-Class and the driving position is 65 mm higher. But the boot is relatively small at only 430 litres compared to 610 in the EQS and 540 in the E-Class. There is no second boot in front and the engine bonnet is fixed so the washer fluid reservoir lid is on the left wing.

The Autocar colleagues have not yet driven the car but have been riding as passengers to the right of the driver. 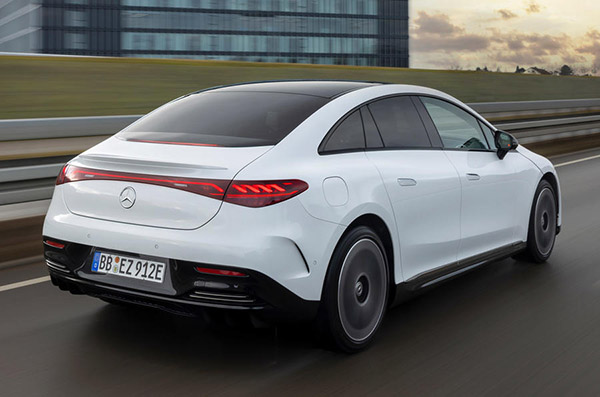 Like the EQS, the EQE is very quiet even at the highest standard of electric cars and only a slight hiss is heard under load from the rear mounted motor. At high speeds and with winter tyres on 20-inch wheels, the noise level is very low. The low noise level is due to both the aerodynamic shape and the very stiff bodywork. The body construction is similar to the EQS but the percentage of steel is higher. The EQE has better torsional stiffness than the E-Class.

Torque delivery depends on the chosen driving mode: 80% in Comfort, 90% in Sport, and 100% in Sport+. On Slippery the torque is drastically reduced to 50%. The 292 HP engine pushes the 2450 kg heavy car decently thanks to the intant torque. But it’s not as explosive as other rivals with two engines. 0-62mph is achieved in 5.6 seconds, about the same as the E 450 4Matic, and top speed is limited to 131mph.

As with other Mercedes models, you can choose three recovery modes D+, D and D- from paddles behind the steering wheel. With the battery mounted in the floor the center of gravity is lowered and the EQE felt very planted on the road when the Rocker attacked the corners more decisively. Body movements in turns are progressive and easy to control when lateral forces start to increase. It’s also nimble for such a big, heavy car thanks to the integral steering, which is available with two different steering angles like the EQS – 4.5 or 10 degrees.

With firmer damping and shorter wheelbase, it doesn’t offer similar ride quality to the EQS but still offers good ride comfort with 265/50 front and 295/40 rear tyres and optional air suspension. And it offers good control over rutted asphalt or potholes offering much more comfort than the Tesla Model S.

Autocar colleagues think the Mercedes EQE is a better alternative to the Tesla Model S and Mercedes E-Class. The tested single-engine model is not the fastest but offers adequate dynamics. And the relatively large battery and sophisticated energy recovery system give a competitive range and among the most economical energy consumption in the segment.