Welcome to the Magical Garage. Discover a world of innovations by Mercedes-Benz.

Mercedes-Benz filmed a commercial for the EQE electric sedan in Kyiv, during war. The team arrived in Ukraine’s capital this past spring.

The car showing up in the video is the new Mercedes EQQ 350+. This version kicks of the range of the mid-size zero-emission sedan. It features a single motor, mounted on the rear axle, and a 90.6-kWh battery pack.

The shooting of the video ad took place in both Los Angeles, California, and Kyiv, Ukraine. According to nashkiev.ua, The German studio Tempomedia Production Company team chose the Institute of International Relations and the Institute of Journalism of the Taras Shevchenko University as locations.

Ukrainian studio limelite.co handled the local production of the EQE ad in the eastern European country. It is the same exact studio that shot a music video for Miley Cyrus’ song Nothing Breaks Like a Heart. The filming also took place in Kyiv.

The ad is part of the Magical Garage series. It is an advertising campaign that highlights the technology Mercedes-Benz implements in the cars they build. 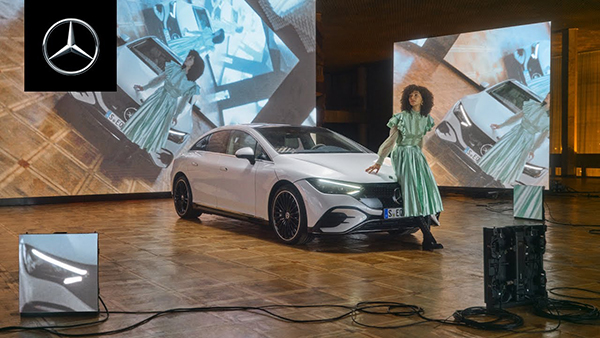 It is not the first commercial that Mercedes filmed in Ukraine. Last year, production studio 23/32 filmed an ad called Timeless in Kyiv.

And there are several VIPs who made it to Ukraine after Russia started the vicious war. Actor and producer Sean Penn was hardly convinced to flee the country when Russia attacked, on the 24th of February. Penn returned to Ukraine last month and met president Volodmir Zelensky once again.

Angelina Jolie made a surprise visit to a boarding school and medical institution in Lviv in May, to meet refugees and volunteers. Air-raid sirens started off when she was outside. Defensive forces ushered her and her stuff to an underground shelter.

To show support for the country fighting for its freedom, Ed Sheeran released the video for his 2step song. The filming also took place at the Taras Shevchenko University in the Ukrainian capital.