We may soon see a new competitor for the Tesla Model 3 in the form of the Mercedes-Benz EQC sedan. Although there hasn’t yet been an official confirmation of such an offering from Stuttgart, there has long been talk of a C-Class machine to stack up against Tesla in this segment. As such, we offer our unofficial rendering of how the EQC sedan might look. 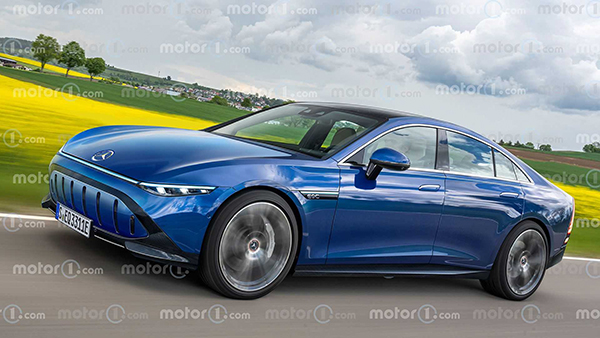 Aerodynamics (Almost) From The Concept
Our exclusive rendering draws on the Vision EQXX concept for a foundation. Debuting in early 2022, the concept boasted a range of 1,000 kilometers (621 miles) and we experienced that ourselves in a special first ride. We think the EQC could borrow design cues from the concept for both appearance and efficiency purposes, albeit toned down some.

For example, the hood could be shorter and curvier, while the center section of the bodywork is taller to ensure greater interior space. The rear would have a less aerodynamic look than the concept, but Mercedes could maintain some EQXX charm with the characteristic horizontal taillights.

The EQXX prototype had an aerodynamic coefficient of 0.17, one of its secrets for range and efficiency. With design tweaks on the EQC sedan, it could aim for a 0.19 or 0.20 coefficient and remain in line with the larger EQS.

New Platform Underneath
According to some rumors, the EQC sedan will be the first model built on the new MMA (Mercedes Modular Architecture) platform. This architecture was previewed by the Vision EQXX, utilizing 100 kWh batteries that weigh 30 percent less and take up 50 percent less space versus those in the EQS. In addition, the system functions at 900 volts for ultra-fast recharges and the possibility of adding 186 miles of range in 15 minutes.

That might be found on a range-topping EQC, but to keep its price competitive with the Model 3, it’s likely Mercedes-Benz will offer smaller battery options with reduced ranges. However, we still expect these batteries to be more efficient than those used on current models. The maximum range likely won’t match the EQXX, but figures ranging between 300 and 450 miles aren’t out of the question. As for the powertrain, single-motor and dual-motor options are likely with a minimum output of around 200 horsepower (149 kilowatts). Naturally, there would be an AMG model in the mix, bumping output to the 500-hp (373-kW) level.