Mercedes-AMG is one of the most well-known sports car manufacturers, achieving worldwide recognition after many successful high-performance models that took the car industry by storm. Their cars are synonymously associated with powerful raging V8s fitted to extremely capable chassis.

That being said, throughout AMG’s history and even in recent times, there were also other kinds of road weapons created, equipped with four, six, and even twelve cylinders, made possible by its invaluable technicians, who are nothing short of masters in hand-building engines.

In the last couple of years, Mercedes-AMG expressed its intention to pursue a hybrid and all-electric future as the car industry shifted more and more towards vehicle electrification. As a result, besides the performance vehicle lineup we already became very accustomed to from AMG, the company also strived to create a range of high-performance EVs that can compete and maybe even outperform their gasoline-powered counterparts.

AMG’s innovative hybrid drivetrains solutions are not a secret anymore, already being deployed in vehicles under the “E Performance” designation, as seen in the recent C 63 S or the AMG GT 63 S 4-Door Coupe model range. 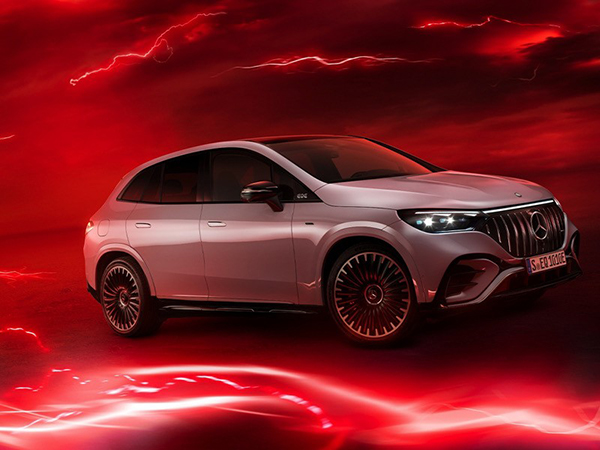 Naturally, the next step in this direction comes in the form of an all-electric AMG, for which the German manufacturer turned its attention to the most recent Mercedes-Benz addition to its lineup, the EQE SUV. Although a mid-size luxury crossover, it shares an obvious resemblance with the sedan alternative from the same EQ range.

Being AMG’s first-ever all-electric vehicle, the all-new Mercedes-AMG EQE SUV features two powerful electric motors and a fully variable all-wheel drive, as well as many other high-performance goodies. Some of them include the AMG Ride Control+ air suspension, which comes fitted with an Adaptive Damping System. A rear-axle steering system is also available, together with the Active Ride Control roll-stabilisation system and complemented by AMG’s Sound Experience technology, which tries to make the driver forget about the old rumbling engine soundtracks of the past.

Each dual electric motor assembly drives only one axle, and together, they produce impressive performance figures for an SUV this size. This arrangement enables the car to benefit from a fully variable all-wheel drive system which can put the power to the road as efficiently as possible under all possible driving circumstances. 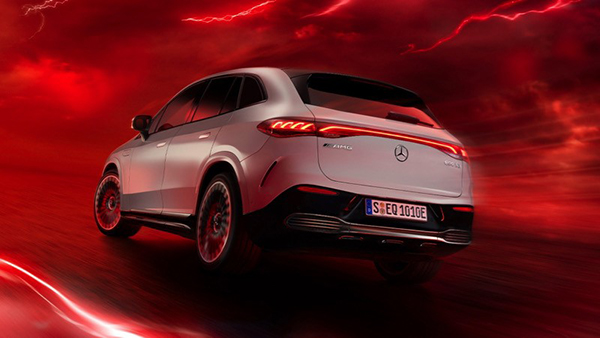 In its most powerful configuration, AMG’s first electric vehicle can reach 62 mph (100 kph) from a standstill in just 3.5 seconds, stepping in the same territory as the Tesla Model Y Performance. Top speed is electronically-limited to 149 mph or 130 mph depending on the variant at hand, although both versions of the AMG EQE SUV have an estimated WLTP range of 233 to 292 miles (375 to 470 km).

Making all this possible is the vehicle’s high-performance battery, containing a total of 10 modules and 360 pouch cells, providing a usable energy value of 90.6 kWh. Additionally, the EQE 53 SUV’s battery management system comes specially customized by AMG, which takes even more advantage of the high energy density and high charging capacity that define the current generation of Mercedes-AMG batteries. The vehicle can be driven in several modes designed for optimal resource utilization in every specific circumstance. Performance is the direct focus of the Sport and Sport+ drive programs, while operating range comes as a primary concern when the vehicle is set in the Comfort drive mode.

Another major advantage of AMG’s new generation of battery technology is the reduced charging times that the AMG EQE SUV can accomplish if connected to fast direct current (DC) stations. In this environment, the vehicle can efficiently draw up to 170 kW of power, which within 15 minutes could provide enough juice for up to 106 miles (170 km)[WLTP]. Nonetheless, the all-new electrified AMG can be easily charged at home or at public charging stations with 11 kW or, alternatively, 22 kW of alternating current thanks to the onboard charger. 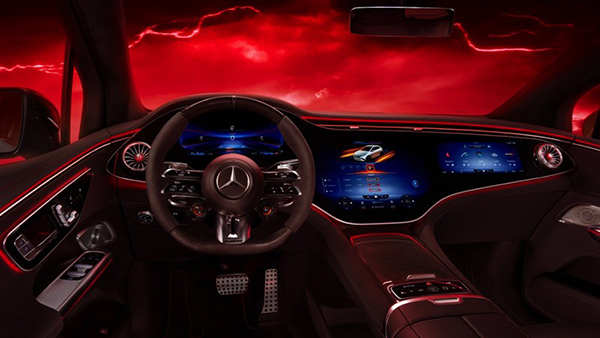 Large sculpted surfaces, fewer joints, and smooth transitions define the exterior appearance of the vehicle, emphasizing an athletic character defined by dynamic proportions. A new addition for the future electrified AMG vehicles is the new brand-specific badge, which now illustrates a Mercedes-AMG pure-electric car for the first time, replacing the Mercedes three-pointed star hood ornament. Moreover, the AMG variants of the EQE SUV present a unique front apron, which is body color painted and features the A-wing in a high-gloss black and chrome trim.

The side view gets completely dominated by the AMG-specific wheel arch cladding, and the flawlessly integrated door handles that provide a visual emphasis for the aerodynamically optimized 21 or 22-inch AMG light-alloy wheels. The helix-shaped taillights complete the dynamic appearance of the new AMG EQE SUV alongside the body-colored rear apron featuring an enhanced diffuser with longitudinal fins.

The inside living space is a stunning exhibition of fine materials, individual upholstery options, Nappa leather alternatives, and multiple color package choices. The regular EQE front seats and steering wheel are replaced with AMG-specific ones, the sports seats showcasing individual graphics and distinctive seat covers made from Artico man-made leather with microfibres and red topstitching. The twin-spoke wheel impresses the beholder with its ingeniously integrated buttons and displays. The latter allows for crucial driving functions and programs to be controlled without the driver’s hands leaving the steering wheel, enabling numerous parameters to be selected directly.

The first half of 2023 will see the launch of the regular EQE SUV. A few months later, the more alluring AMG version will also be available at dealers, but at the moment, Mercedes-AMG has not disclosed any pricing details, although we should fully expect the EQE 53 4MATIC+ to easily exceed the $100k mark.