The latest Euro NCAP test round shows how car safety has improved, with no less than eight models achieving the maximum five-star safety grades. The Mercedes EQE leads the pack, continuing the streak of other EQ models tested before.

Car safety is at its highest thanks to safety organizations like the Euro NCAP or NHTSA, which promote vehicles offering the best protection to their occupants in the case of a crash. Safety ratings sell new vehicles, and achieving a top safety score is not only pride but also a requirement for successful car models. This has improved car safety for all of us, as shown by many five-star scores in safety tests.

Euro NCAP released its October results, and no less than eight models scored the maximum five-star rating. Leading the pack is the new Mercedes EQE, which also snatched a “Very Good” rating for its Highway Assist system. Available as an option, the Active Emergency Stop Assist, which safely maneuvers the car to the slowest lane before bringing it to a halt if the driver becomes unresponsive, is the first of this type assessed by Euro NCAP. The function earned the EQE a “Very Good” grade, making it the highest-scoring car tested by Euro NCAP in its Assisted Driving ratings. 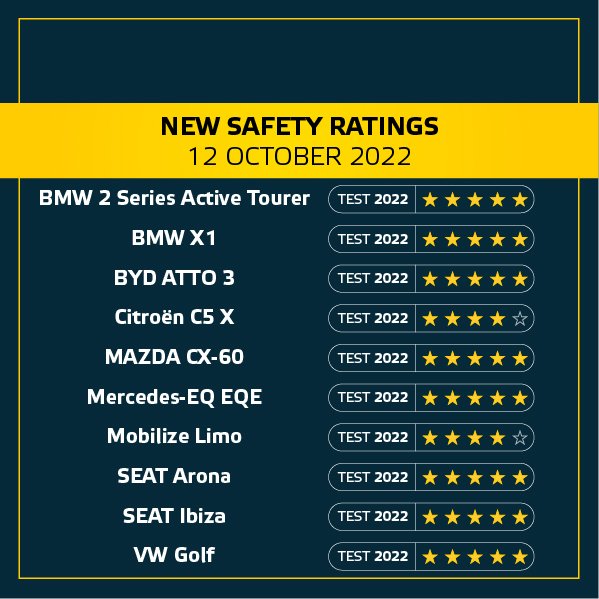 “Fully autonomous driving is still some way away but the groundwork is being laid by robust, high-performing assisted-driving systems like this one from Mercedes,” said Euro NCAP’s Secretary General Michiel van Ratingen. “Congratulations to them on their ‘Very Good’ grading, and on getting their fourth five-star safety rating this year.”

The Chinese car manufacturers have significantly stepped up their safety game, and the BYD Atto 3 proved that in this round with a perfect five-star rating. Two other Chinese-made vehicles, the Citroën C5 X, built in China by joint-venture Dongfeng Peugeot-Citroën Automobile, and the electric sedan Limo from Renault-Jiangling joint-venture Mobilize, earned four-star ratings.

SEAT Ibiza and Ateca, Mazda CX-60 and BMW X2, and BMW 2 Series Active Tourer also achieved a five-star rating, along with the Mazda CX-60. The facelifted Volkswagen Golf 8, which gained a center airbag, lap pretensioners, junction assist, and a fatigue detection system, has scored an equally impressive five-star rating, despite the tougher protocol requirements of 2022.