A barely disguised prototype of the Mercedes-AMG EQE has made its way to the World Wide Web in a short video that shows it testing on the roads of Germany.

The prototype, which has the psychedelic vinyl stickers covering parts of its front and rear ends, comes a couple of weeks after our vigilant spy photographers snapped yet another tester. However, this one looks slightly different, from the bumper design to the wheel pattern.

For one, the camouflage only covers the grille, which might sport vertical slats, like other modern high-end AMGs. The front bumper looks less aggressive compared to our previous sighting, and so does the diffuser. Moreover, the trunk lid spoiler is smaller, and the wheels have a normal multi-spoke styling. There are no privacy rear windows anymore, and the side glass has chrome surround. 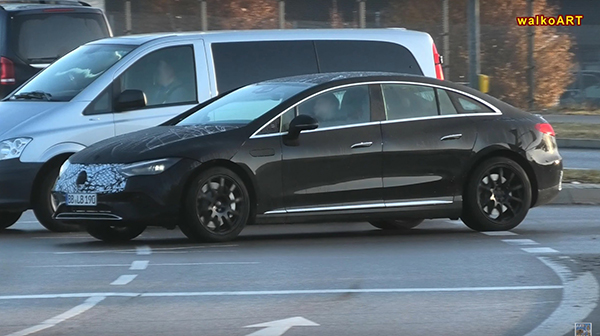 Due to the toned-down looks, we are probably looking at a lesser model, perhaps baptized the Mercedes-AMG EQE 43, considering that the previous one was presumed to bear the 53 suffix. We know nothing about the powertrain, but since the entire EQE family shares its construction with the bigger and more luxurious EQS, the AMG models might have similar or perhaps identical assemblies.

For instance, the range-topping (for now) EQE 53 could use the same electric motors as the equivalent EQS, which has no less than 649 horsepower available via the right pedal, and 701 pound-feet (950 Nm) of torque. Get it with the optional AMG Dynamic Plus Package, and the output and thrust will increase to a supercar-rivaling 751 hp and 752 lb-ft (1,020 Nm) in the Race Start driving mode.

Rumor has it that Mercedes-AMG will pull the cover off the punchy EQE soon. Nonetheless, interested parties will have to wait a bit until they will get their hands on it, because production is expected to kick off next summer.