Mercedes introduced the EQE at last month’s Munich Motor Show, joining the EQS and the brand’s growing all-electric lineup. Shortly after that, the hotter AMG variant appeared out testing, though the automaker hid it under a full-body wrap. That covering is gone in the latest spy pics, which depict the car with just a sliver of its original camouflage, and they give us a good look at its AMG-inspired styling touches. 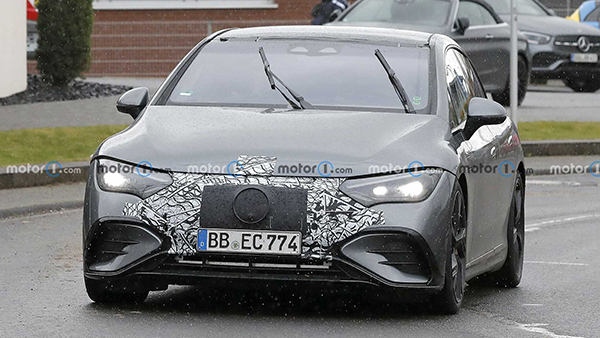 The car’s sportier attitude is immediately identifiable, with large air intakes framing an aggressive front skirt. AMG adds a bigger trunk spoiler and air outlets behind the back wheels at the EQE’s rear. If those features aren’t apparent, the painted AMG brakes behind a slick set of black wheels certainly are. The only bit of camo covering the car hides the front fascia, two spots on the lower rear bumper, and the trunk lid and spoiler – everything else is exposed.

Mercedes-AMG, of course, has not provided the public with any information about the model’s potential performance numbers. However, it did hint at it when it launched the EQE – saying that future performance versions would arrive with around 671 horsepower (500 kilowatts). That’s a hefty amount of grunt, though it’s below that of the range-topping AMG EQS with its 751 hp (552 kW) on tap.

The standard EQE 350 has to do with 288 hp (215 kW), so there could be a variety of AMG models with different outputs available. We’re likely looking at the hottest variant the company is cooking up, especially with those large brakes. When will we see it? It took Mercedes five months after releasing the EQS to debut the AMG variant, and we expect a similar timeline for the EQE. That would put the AMG EQE breaking cover sometime in February or March – which would line up with the Geneva Motor show if organizes hadn’t canceled it.