We’ve seen lightly camouflaged prototypes of the Mercedes-Benz E-Class and AMG E63 for a year now; it’s been so long that many predicted Stuttgart’s bread-and-butter sedan to debut this year as a 2020 model. Both cars have been spotted navigating German streets, their minimal changes still wrapped under a smattering of tape. What can be seen for now are new headlights with LED DRL signatures mimicking the CLA- and CLS-Classes, astride a new trapezoidal grille shape. The grille on the prototype AMG E63 differs from the current E63’s design, and is different from the Panamericana pattern on other AMG’s in the range. If the cutaways can be believed, narrower taillights will stretch further across the back of the vehicles into the decklid, similar to the CLS.

Inside, the latest MBUX infotainment gets displayed on a giant screen screen running from the gauge cluster behind the steering wheel to the center console. The steering wheel looks like the unit spotted in S-Class prototypes, with a tiny hub capped by a large logo, and redesigned spokes. 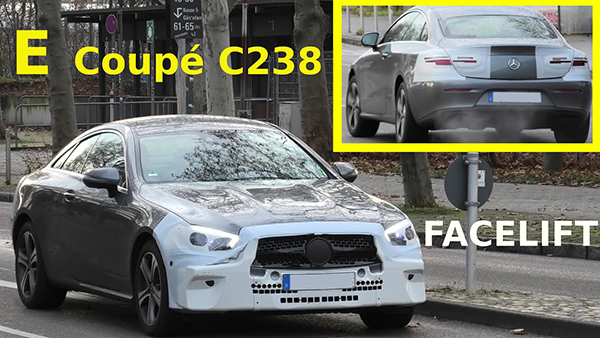 The standard models could gain a new hybrid model, the E450 potentially giving up its 3.0-liter V6 for lesser-powered version of the 3.0-liter inline-six cylinder with mild hybrid assistance that powers the AMG E53. A plug-in hybrid might come, too. It’s possible that the AMG E63’s 4.0-liter twin-turbocharged V-8 gets a little boost in power from its current 603-horsepower output, but don’t be surprised if that doesn’t happen.

As part of next year’s launch slate, the E-Class facelift will likely debut in the shadows of the all-new S-Class and the AMG GT Black Series, and plug-in hybrid GT 4-Door. Automobile reported earlier this year that the facelifted E-Class could get a short lifespan, the next-generation model coming in 2023. The magazine expects Mercedes to drop the E-Class coupe and cabriolet; if that happens, it would mean the end of the mid-sized two-doors that started life as the CLK-Class coupe and convertible in 2002.