We’ve caught the next-generation Mercedes E-Class testing once again, hinting that a full reveal isn’t too far away. The all-new 2023 model won’t come in two-door cabriolet and coupe bodystyles, with Mercedes sticking to saloon and estate for the E-Class but launching the CLE to cover off the two-door bodystyles. 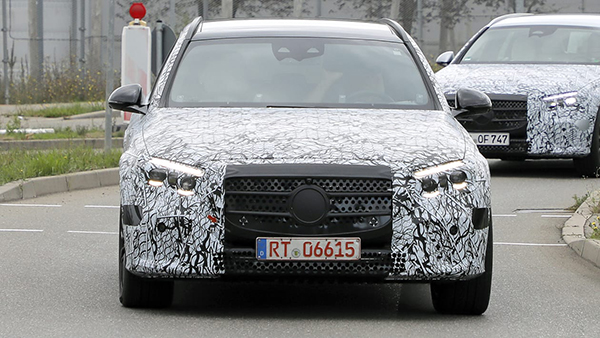 This estate version has been given the same level of camouflage as previous test cars, but we can see it’s one of the more sedate variants, rather than a hot AMG model. The front looks identical to the saloon spy shots, apart from a second horizontal strake appearing in the grille.

There’s no quad exhaust system on this model, although we have seen this classic AMG design trait on another E-Class test car recently. The range-topping E 63 could arrive as early as next year.

An AMG E-Class Estate has been available since the W124 (S124) E 36 from 1993, so we expect the E 53 and E 63 badges to find themselves on the E-Class Estate before long. However, the estate could be launched after the saloon, given we’ve only just started seeing it undergo testing.

As with the rest of the lineup, the E 63 AMG will sport new horizontal tail-lights, smoother surfacing, a more upright nose and styling touches such as flush, pop-out door handles.

The E 63 model we spotted rides on larger, wider wheels and at the rear we can see the quad-tip exhaust set-up that has become a staple of Mercedes AMG cars. Behind the camouflage at the front, a bespoke grille design and more aggressive air intakes are almost a certainty. 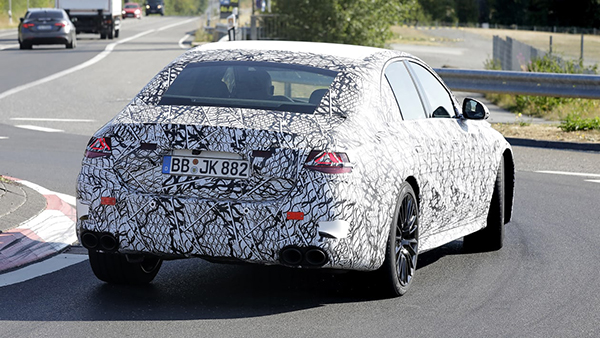 Mercedes E-Class exclusive images
Our exclusive images give a preview of what’s to come from the two-model line-up, consisting of a saloon and an estate. The E-Class Coupe and Convertible models won’t be continued, with the arrival of a brand-new CLE set to cover those bases.

The new E-Class should hit UK roads in the second half of 2023, beating the next-generation BMW 5 Series to market. However, while its longstanding rival will come with an all-electric option alongside its combustion and hybrid drivetrains, the E-Class will stick with 48-volt mild-hybrid petrol and diesel engines, plus plug-in hybrid power. Mercedes wil instead add the electric EQE saloon to its line up as the E-Class’s EV stablemate.

Our spies haven’t seen inside the new E-Class’s cabin yet, but, as with the exterior makeover, the interior will receive an overhaul that will centre around a new portrait-orientated touchscreen system rising out of the centre console, again similar to the C-Class and S-Class. The style will become uniform across the brand’s three saloons, but the technology powering the screens will not.

The C-Class and S-Class differ in terms of the display sizes they offer and the technology behind them. The E-Class is likely to come fitted as standard with the 11.9-inch display that’s optional on the C-Class, with the 12.9-inch OLED panel from the S-Class featuring haptic feedback on the options list. Expect a fully digital dash to feature as standard, with 3D instruments available. The E-Class should also offer similar head-up display and semi-autonomous driving aids to its larger sibling, although these will also likely be offered as optional extras.

Expect range-wide availability of 48-volt mild-hybrid power. Every diesel and petrol version of the new E-Class will support this technology, but a new plug-in hybrid model with significantly more electric range and improved efficiency will be the biggest draw, using the 31.2kWh battery and motor tech from the new GLC. A new E 300 e will team a 2.0-litre turbocharged petrol unit with this new tech, enabling a range of more than 80 miles on battery power, and company car tax-busting Benefit-in-Kind rates.

Exactly what AMG has planned for the new E-Class is still unknown, although high-performance versions of the next model will arrive a little while after the core saloon is launched. The next AMG C 63 is moving to a new plug-in hybrid four-cylinder set-up producing up to 671bhp, so we could see this powertrain feature in the E 63 and a detuned version of it in the E 53.

However, Chief Technical Officer, Jochen Hermann previously told Auto Express that the brand’s famed V8 engines will feature in “AMG GT 4 Door-sized cars and above”. The current Mercedes-AMG GT 4 Door sits on the same MRA platform as the outgoing E-Class, so it’s possible V8 power could return on the new MRA2-based E-Class.

When it comes to the chassis, the new C-Class and the GLC have dropped air-suspension from the options list in the UK market, given the larger E-Class has always had an extra focus on comfort, we expect the Mercedes AIRMATIC suspension to feature. As with the larger S-Class, it will also be offered with a new rear-wheel steering system.

However, it won’t deliver the same capability as the brand’s flagship limo, which can turn the rear wheels by as much as 10 degrees in the opposite direction to the fronts to improve agility.