Few cars are as synonymous with spacious family transport as the Mercedes E-Class Estate. The E-Class Estate of today has moved a long way upmarket from Mercedes’s original estate cars, although it can trace its roots to the late 1970s and the W123 series. 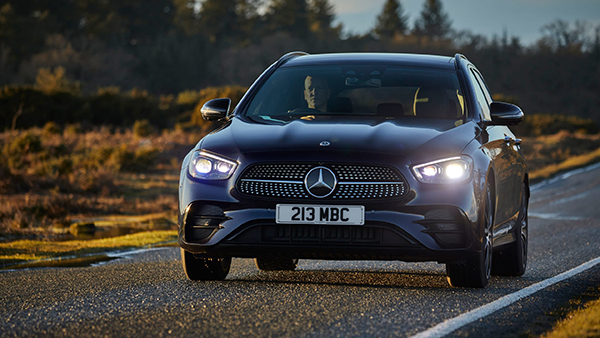 The current model is the W213, and was launched in 2016 as a saloon, with the estate version arriving soon after. A facelifted model was introduced in 2020 with a few styling tweaks and various equipment upgrades.

The estate shares the sweeping lines of its four-door sibling, but adds an extended roof line with integrated roof rails and extra rear windows. Other standard kit includes a power tailgate that can be set to open at different heights and self-levelling air suspension at the rear.

Inside, you get a 640-litre boot, which is more than you’ll find in the E-Class Estate’s main rivals, the BMW 5 Series Touring, Volvo V90, Audi A6 Avant and Jaguar XF Sportbrake. The back seats fold in a 40:20:40 split and create a maximum of 1,820 litres with them all folded. Mercedes also claims that there’s enough depth in the boot and width between the rear wheelarches for a Europallet cargo pallet to fit – it’s one of the few cars that’s capable of carrying one.

There’s plenty of tech carried over from the saloon, too. The semi-autonomous ‘Drive Pilot’ system is offered, while Merc’s smartphone-controlled remote parking system is available. Inside, the twin 12.3-inch displays give the dashboard a hi-tech feel to go with the luxury and comfort found elsewhere in the cabin.

There is a choice of three diesel engines available for the E-Class Estate, along with a plug-in diesel option and a single petrol unit. The 2.0-litre E 220 d generates 191bhp, followed by the E 300 d 4MATIC and E 400 d 4MATIC with 261bhp and 325bhp respectively. The diesel plug-in hybrid produces a total of 302bhp with a huge 700Nm of torque, while the entry E 200 petrol makes 194bhp.

Outside of the Mercedes-AMG cars there are five available trim levels: Sport, AMG Line Edition, AMG Line, AMG Line Premium and AMG Line Night Edition Premium Plus. The Sport-spec offers reasonable kit, but the allure of the AMG Line equipment and badge kudos may prove tempting.

It should come as no surprise that the Mercedes-Benz E-Class Estate is just as alluring and desirable as the saloon. It retains that car’s elegantly styled, solidly built and tech-laden interior, plus its excellent comfort and refinement, and adds a boot that’s bigger than any rival’s in the class.

Those after the most accomplished blend of agile handling and comfort should consider the BMW 5 Series Touring, but the E-Class still has strong, efficient engines, while the models with air suspension are exceptionally cosseting. It’s not exactly cheap to begin with, so the extensive (and expensive) options list means you need to be careful when speccing it up. 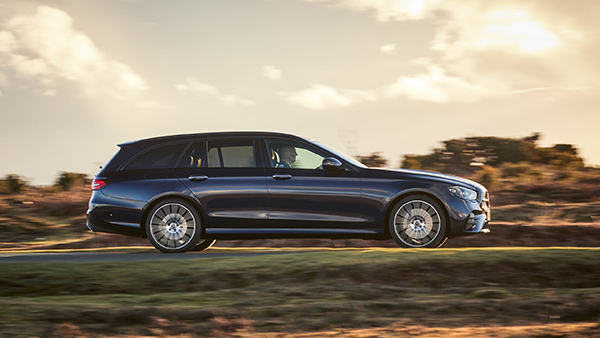 Mercedes has its Modular Rear Architecture (MRA) to underpin the E-Class. The car benefits from a multi-link rear axle, and the E-Class Estate has self-levelling air suspension at the rear, while adaptive dampers are standard.

18-inch wheels are standard on AMG Line cars, while 19-inch alloys are included for the AMG Line Premium versions and 20-inchers with the Night Edition Premium Plus trim. The bigger wheels do affect the ride quality as the E-Class feels a little harsher than a BMW 5 Series Touring over similar surfaces.

You notice bumps more, sometimes by the resounding thud, but on faster A-roads and motorways the E-Class feels more at home. The chassis copes with gentle, rolling tarmac well, allowing the body to float over less severe imperfections to deliver a decent level of comfort, but you’re never too far from a harsher impact due to the larger alloys and low-profile tyres.

The Mercedes isn’t as capable dynamically as a 5 Series, either. There’s still a good level of grip, but the chassis feels more inert and less agile, taking longer to respond to your inputs – especially when it comes to changing direction.

Settle down to a cruise and on the motorway, and you’re playing the car to its strengths. The nine-speed automatic gearbox makes for low cruising revs of just 1,300rpm at 70mph, while the slippery shape also means there’s virtually no wind noise, even in the All-Terrain model, which sits a little higher off the ground.

The E-Class estate doesn’t offer a lot to reward the keen driver in entry-level form. There’s grip and composure, particularly on models fitted with the 4MATIC air suspension, but there’s little interaction and the E-Class feels more heavy than agile. The E53 and 63 S AMG cars are better, with loads of grip from the 4×4 system and a more alert chassis. 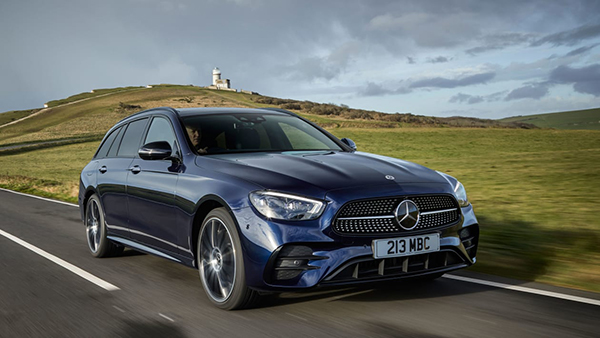 Engines, 0-60 acceleration and top speed
The 2.0-litre diesel units are smooth and refined enough, and the E 220 d delivers strong straight-line performance. With 191bhp and 400Nm of torque produced at 1,600rpm, the Mercedes accelerated from 0-60mph in 7.6 seconds when we tested it.

Thanks to the nine-speed automatic gearbox it’s serene at speed, although it’s not quite as snappy as a BMW 5 Series. While the new engine is definitely more refined than its predecessor, it’s also no quieter than the 5 Series and gets a little rattly at the top end. But use the low-down torque rather than stretching the 2.0-litre unit and the E-Class is a relaxing car.

The 3.0-litre six-cylinder diesel engine in the E 400 d is even better in that regard. It’s torquey and feels powerful, plus it’s much smoother than the four-cylinder units. It’s expensive to buy and drinks more diesel, but will be worth it for some. 0-62mph is reached in 5.3 seconds with a 155mph maximum.

The E 53 and E63 S Mercedes-AMG cars are quite frankly ridiculous, with 0-62mph times of 4.5 seconds and 3.5 seconds respectively. 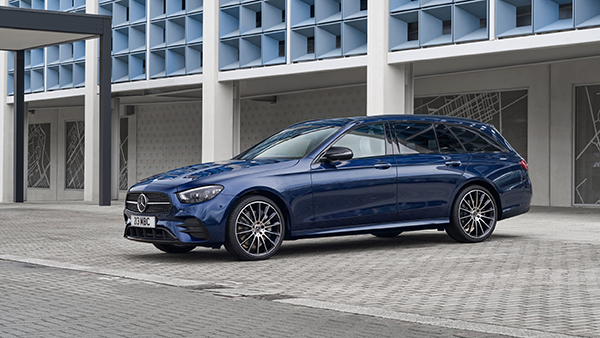 MPG, CO2 and Running Costs
High price, but economy is decent and there’s lots of kit

The Mercedes E-Class Estate is a bit pricey to buy, but the superb economy of the E 300 de diesel plug-in hybrid version should go some way to balancing things out. As the hybrid is capable of running for around 30 miles on electric power alone, it allows Mercedes to quote an average economy figure of 201.8mpg. So, if you keep the battery topped up and have a reasonably short daily commute, then you could keep running costs pretty low. CO2 emissions are just 36g/km, which gives a Benefit-in Kind tax rating of 11%.

The more powerful 350d car returns 48.7mpg and emits 151g/km of CO2, which means it’ll cost more to run than the four-cylinder versions – though that’ll be worth it for the smooth engine for some buyers. Company car buyers will definitely prefer the 220d.

Taking a halfway house stance between performance and decent economy, the E 400 d 4MATIC manages 40.9mpg with emissions of 181g/km. 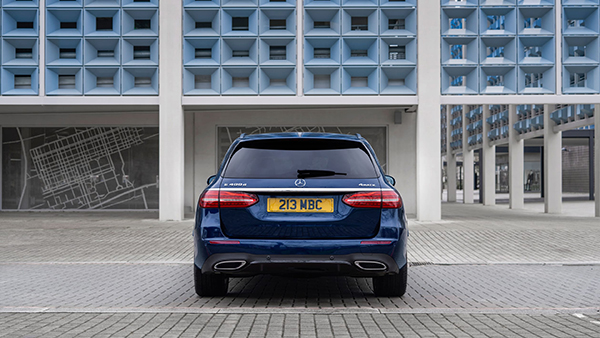 Insurance groups
The cheapest E-Class Estate to insure is the entry E 200 petrol car which sits in group 33, while the E 220 d starts from group 35. Organising an annual premium for the diesel plug-in hybrid car will prove to be a little more expensive as it’s in group 45. The E63 S performance model is predictably in the top group 50.

Depreciation
The E-Class Estate should hold onto around 48% of its original value after a typical three-year/36,000 -mile ownership period. The plug-in diesel versions appear to be a slightly stronger bet, as expert data predicts residual values of around 51-54%. In comparison, a BMW 5 Series Touring should be worth around 45% of what you originally paid for it after the same period, with the 520d variants faring the best at nearer 50%. 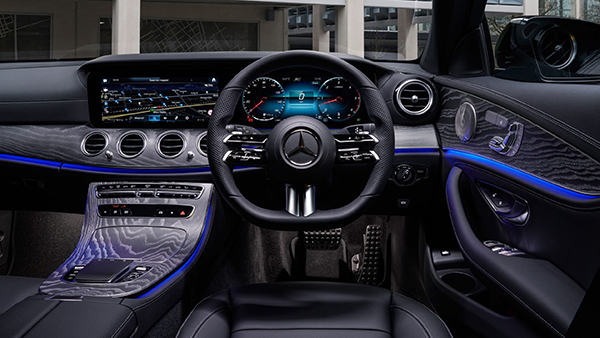 Interior, design and technology
E-Class looks good, but design is very similar to other Merc models

The E-Class saloon takes its inspiration from Mercedes’ S-Class, so it gets plenty of the larger car’s svelte curves. However, look to the back of this estate version and it is the smaller C-Class Estate that serves as a template. That means the E-Class Estate gets the same sweeping roofline and steeply raked tailgate, plus similarly distinctive LED tail-lights that are joined by an eye-catching chrome trim strip.

Overall, it’s a classy design, but it’s difficult to ignore the fact that, from many angles, it resembles a scaled-up C-Class Estate. Still, AMG Line models look more distinctive thanks to the addition of a sportier bodykit with bigger grilles, a deep rear bumper and chunkier side sills. It also gets eye-catching 19-inch alloy wheels that hide larger, drilled brake discs.

Inside, AMG Line models have Mercedes’ Seat Comfort package, which provides an even wider range of adjustment and helps make the car as comfortable as a Volvo V90. Other equipment highlights include adaptive dampers, LED headlamps, a self-parking system, a reversing camera and parking sensors. Sat-nav, heated seats, keyless go and a sports steering wheel with Mercedes’ new twin touchpad controls are also on the kit list.

The cabin feels upmarket, with the slick centre console design, metal-finish air vents and 64-colour ambient light set-up helping to give the car the same luxurious ambience as the brand’s S-Class flagship.

Sat-nav, stereo and infotainment
There are two 12.3-inch screens – one for the driver instrument information and a further touchscreen for the infotainment system.

Apple CarPlay and Android Auto are both standard, while the system is easy to control using the scroll wheel and responds relatively quickly to your inputs, although it’s not quite as intuitive to use as BMW’s iDrive.

Night Edition Premium Plus versions include an upgraded 13-speaker Burmester audio system and the MBUX augmented reality for navigation function, which features a live feed of the road ahead using a front camera with overlaid directions on the screen. 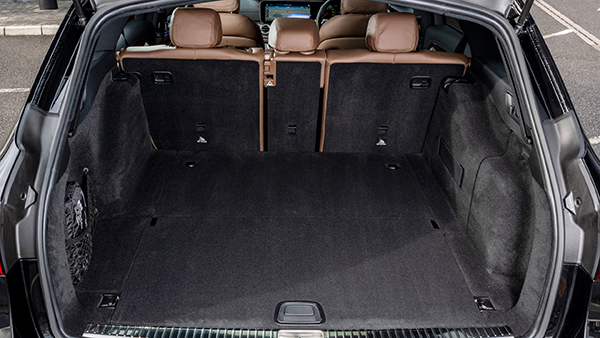 Practicality, comfort and boot space
The huge boot is very practical, but it’s smaller than the previous model’s

The E-Class Estate features a powered tailgate, remote release buttons for the 40:20:40 folding bench and luggage retaining net, plus the rear seatbacks can be tilted forward slightly for an extra 30 litres of space. The car also features a low load lip (although it’s a little higher on the All-Terrain version), while the retractable cover rises up as the tailgate opens, making it easier to access items in the boot. Storage is good, too, with a large central cubby and a big trinket tray.

The E-Class won our 2017 Tow Car of the Year award, and it’s not hard to see why. A 2,100kg limit is 300kg more than the Volvo V90 can manage, while an electrically deployable tow bar is an option.

Boot
With 640 litres of luggage space, the latest E-Class is 80 litres ahead of the Volvo V90, but 55 litres behind its predecessor. It’s a similar story when the seats are folded, because the Mercedes’ total capacity has shrunk from 1,960 litres in the old car to 1,820 litres in the newcomer.

Reliability and Safety
Driver power results are disappointing, but safety tech is impressive

The E-Class adopts some of the safety tech from the S-Class, and includes Active Braking Assist, Attention and Blind Spot Assist, along with a traffic sign recognition system and an active parking function. Cruise control and Adaptive Highbeam Assist are also standard.

Euro NCAP awarded the E-Class a full five-star safety rating in 2016, with an excellent 95% rating for adult occupants and 90% for child passengers.

Mercedes’ form in our Driver Power satisfaction survey isn’t as strong as you’d expect from a manufacturer that relies heavily on its premium status, with the brand finishing our 2020 poll in 28th place out of 30 manufacturers.

Servicing
The manufacturer provides its ServiceCare plans to help with covering the cost of scheduled servicing. You can pay over monthly installments, or as a one-off payment upfront. Prices start from around £30 a month.