The E-Class’s mid-life facelift is limited to a few minor styling changes and some tweaks to the cabin, but it remains an all-round impressive package. It’s still not as sharp as a BMW 5 Series to drive, but the interior blows its rival out the park; some of the tech feels like a bit of a gimmick, but quality, fit and finish are second to none. The E-Class now offers true S-Class luxury at a fraction of the price.

Executive saloons are consistently popular with UK car buyers and still take a sizeable slice of the new car market. However, the sector is changing, with many buyers and fleet managers turning away from diesel in favour of plug-in hybrid drivetrains. 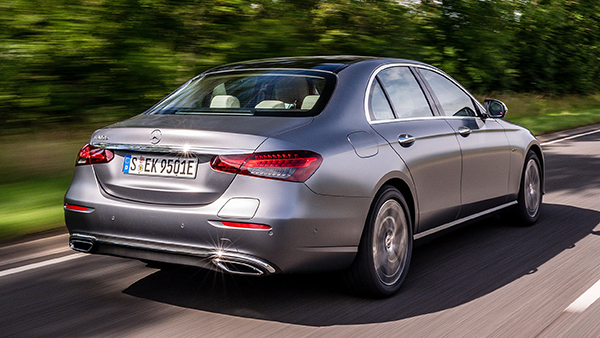 Therefore it’s fitting that our first taste of the facelifted Mercedes E-Class comes in the shape of the E 300 e plug-in. The revisions are limited to a handful of cosmetic tweaks and cabin upgrades with revised infotainment, but the 300 e’s engine and electric motor have been left well alone. 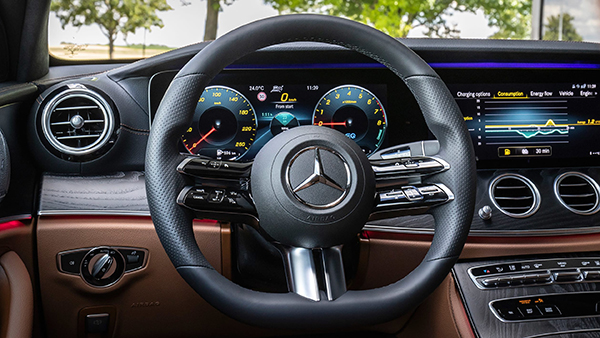 The new infotainment system is an improvement, thanks to the updated and responsive touchpad; Apple CarPlay and Android Auto are both included, and are much more intuitive to use now that the screen can be operated via touch. 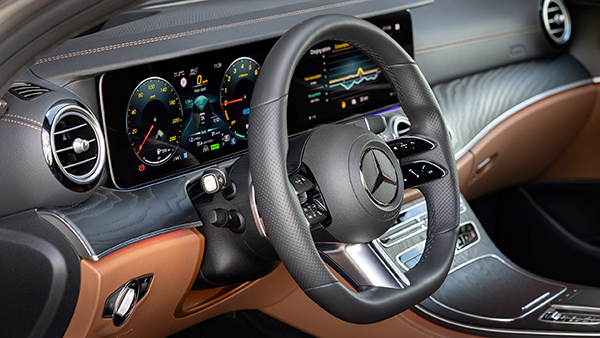 The upgraded cabin also features a new steering wheel, with two pairs of thin spokes branching out from the hub. They’re festooned with buttons, which is slightly confusing at first, but no hardship once you’re familiar with it. It also features ‘capacitive hands-off detection’ for use in conjunction with the adaptive cruise control, which includes route and road-based speed adjustment. 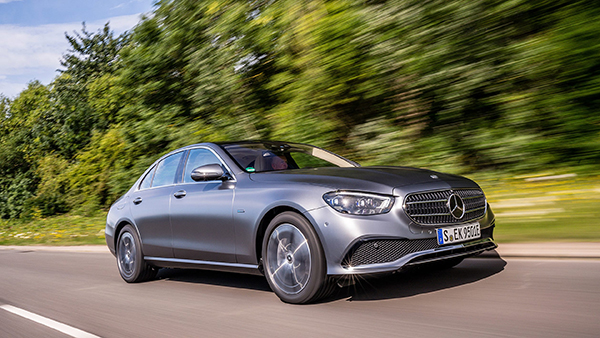 The E-Class’s overall feeling of quality is impossible to ignore. From the plush seats to the leather-trimmed doors and centre console, it’s hard to see where Mercedes’ new S-Class flagship will improve on the E-Class’s winning formula. The cabin is perhaps less driver-focused than that of a BMW 5 Series, but you can’t argue with the faultless fit and finish. 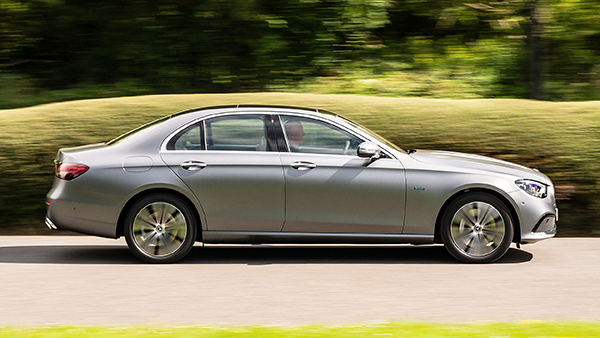 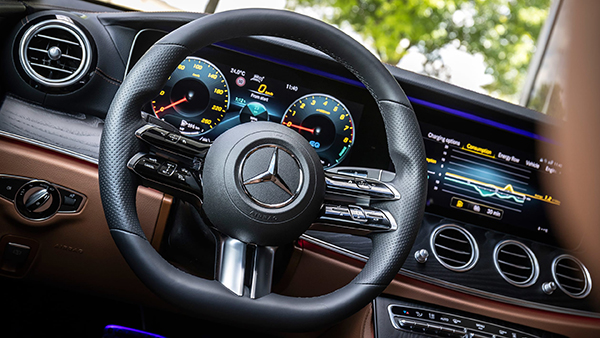 If you’re after the sharpest-handling executive saloon, then the 5 Series still edges the Merc, while the latest Audi A6 arguably pips it for involvement, too. The E 300 e wafts along in a way the BMW can’t, yet it can feel disconnected from the road at times; fine on the motorway, but less engaging on a twisting country road. 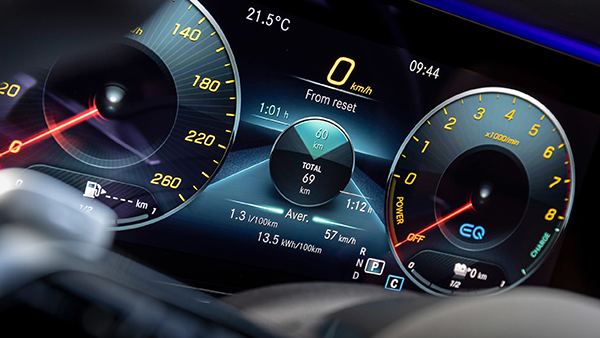 The upside of this is that the Mercedes rides well at high speeds – especially on our car’s 18-inch wheels. It’s not perfect around town, but driver and passengers are shielded from the very worst lumps and bumps. Smaller potholes are of little concern, and even larger ones are absorbed with reasonable confidence. 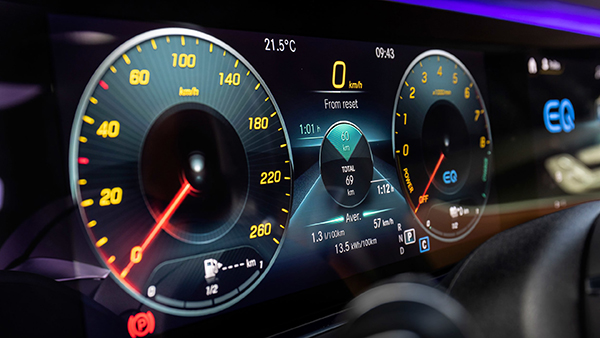 With no changes to the hybrid model’s powertrain or chassis, the E 300 e retains its 2.0-litre four-cylinder petrol engine and electric motor. Combined they produce 316bhp and an impressive 700Nm of torque. As such, performance isn’t lacking; the electrical system’s instant torque allowing access to all that power from a standstill.

Despite its prodigious output, the four-cylinder motor can sound a little strained when you floor the throttle and extend it into the upper rev range. Still, the E-Class more than makes up for this with its incredible refinement – especially when running around on electricity. 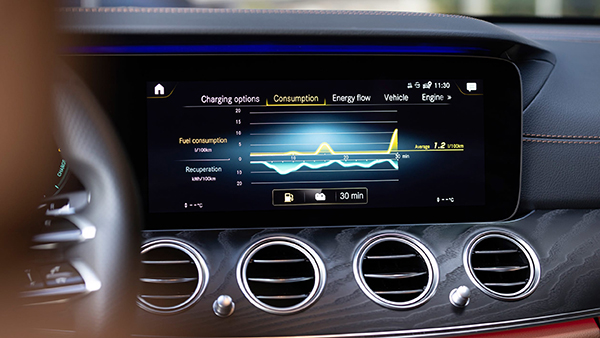 Mercedes still claims an electric-only range of around 32 miles on a full charge, and our test drive showed this is a realistic estimate. Even on faster roads, the E-Class’s range read-out dropped very nearly in line with actual mileage covered. The various drive modes allow you to prioritise or hold battery power, or let the system work out what’s best for maximum efficiency. 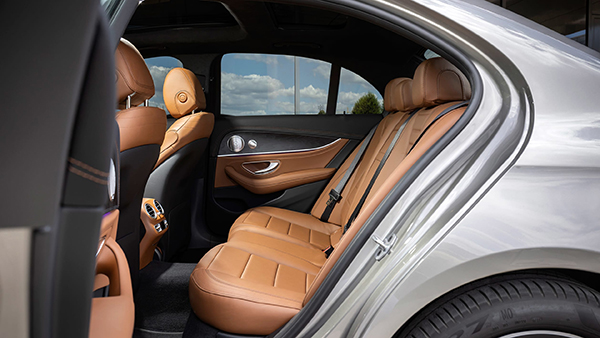 The transition between petrol and electric power isn’t perhaps quite as smooth as it could be, but you’re unlikely to notice the car switching between the two in normal driving. We’d recommend using the battery hold function as much as possible; there’s nothing quite as satisfying as running around town on electric power alone – especially at the end of a long journey.

Charging the E-Class plug-in hybrid is pretty straightforward, thanks to the fact that every E 300 e comes with two cables – one to use with a wallbox or at public charge points, and one for standard three-pin domestic sockets. Owners using the latter are able to top up the battery in around five hours, or just 90 minutes using a 7.4kW home wallbox. There’s no option for high-speed CCS rapid charging, though.

One thing to take into consideration is that the battery does eat into boot space quite significantly, reducing the overall capacity by 100 litres to 370 litres. 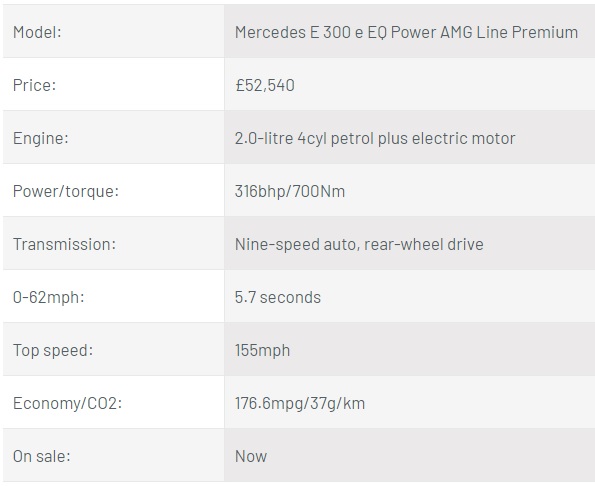 Of course, the main reason many buyers will opt for a plug-in hybrid over a diesel is for the generous tax breaks. The plug-in car grant no longer covers PHEVs, but the E 300 e’s low CO2 emissions mean company car drivers can take advantage of an appealing Benefit-in-Kind rating of 10 per cent for the current tax year. In this regard, an E 220 d can’t come close, although the E 300 de diesel plug-in will hold even greater appeal than the petrol for high-mileage drivers.