The new generation Mercedes E-Class W214 debuts at the end of 2022 and will look like a smaller S-Class. 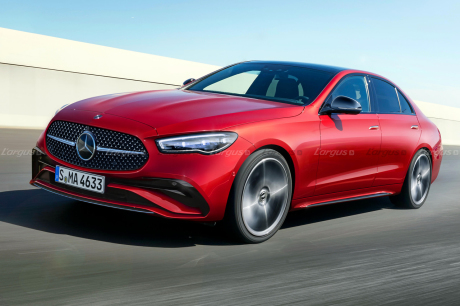 The future Mercedes E-Class code name W214 will be introduced at the end of 2022 and will be available for sale in early 2023. But a V8 engine will no longer be part of the offer.

No V8, only 4-cylinder for AMG versions
The range will consist of 4 and 6 cylinder inline engines. The most powerful 4-cylinder engines will have 272 HP/400 Nm (2-liter turbo petrol M254) and 265 HP/550 Nm (2-liter diesel OM654) and will be equipped with a 48V mild hybrid system and integrated starter generator. There will also be less powerful 4-cylinder diesel versions because there is still a huge demand for taxis.

The 6-cylinder M256 petrol engines will have up to 435 HP and the OM656 diesel up to 330 HP. There is no longer a V8 engine because the AMG versions will have a 4-cylinder turbo engine M139 taken from the A 45 combined with an electric motor, the total power will be over 600 HP. AMG versions will have small batteries to keep the kerbweight within acceptable limits for a sports model.

Instead, there will be PHEV models with a large battery as in the new S 580 e, which will offer an electric range of about 100 km. To make room for the larger battery, the rear axle has been modified.

It is interesting to note that the PHEV’s charging port is no longer on the rear bumper below the right tailight. It has been moved to the rear left fender as in case of the new S-Class and C-Class PHEV.

The new E-Class will have a slightly larger wheelbase (about 2.96 meters), wider track and optional all-wheel drive and integral steering.

The MBUX system will also follow the C and E class layout with a portrait screen that occupies almost the entire center console. Voice control will also be improved. The design will be inspired by C and S-Class and the star logo will be no longer on the hood but only integrated in the front grille. The headlights are narrower and have only a very thin LED daylight. As with the S-Class, the exterior door handles are hidden in the body, but this will probably be optional.