Mercedes-AMG GT is nearly ready to retire, its successor is around the corner, but the model isn’t hanging up its helmet yet. The German firm unveiled a new track-only evolution of the coupe designed to compete in GT2 races and powered by a 707-horsepower V8 engine.

AMG proudly points out the GT2 is the most powerful customer race car it has ever developed. Power comes from a twin-turbocharged, 4.0-liter V8 fitted with a flat-plane crankshaft and tuned to develop up to 707 horsepower and 590 pound-feet of torque. It spins the rear wheels via a six-speed sequential transaxle with a mechanical locking differential that’s linked to a pair of steering wheel-mounted shift paddles.

There’s more to the GT2 than a sleek-looking silhouette and an awesome-sounding engine. Aimed at what AMG describes as “gentlemen drivers,” the coupe features an adjustable suspension system, a specific body kit that includes a new (and massive) rear wing, and numerous carbon fiber components to keep weight in check. The GT2 weighs about 3,000 pounds including the air conditioning system. 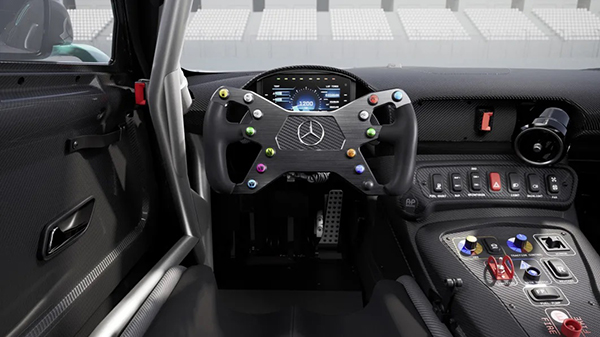 Inside, the driver faces a rectangular steering wheel, a digital instrument cluster, and an assortment of switches on the center console. AMG notes that it developed the multi-function steering wheel jointly with Cube Controls, which is a big name in the world of racing simulators. There’s also a steel roll cage bolted to the GT2’s aluminum chassis, an on-board fire extinguishing system, and a single racing seat.

Mercedes-AMG will continue fine-tuning the GT2 in the coming weeks, it notably plans to perform an endurance test in real-world racing conditions, and sales will begin during the 2023 season. Pricing information hasn’t been announced. As for the standard GT, it’s not sailing off into retirement quietly. AMG launched the 720-horsepower GT Black Series in 2020 and quickly set a Nürburgring record with it.