Prodding the throttle of the 2020 Mercedes-AMG GT Coupe causes the rear end to instantly squirm around directly underneath. The tires scramble for grip, then catapult the car forward with a violent shove to the rear. In straight-line acceleration, it’s like sitting at the weighty end of a pendulum, the cockpit being the bob that controls exactly where that lengthy front end swings to. Yet, the GT is not unbalanced or unwieldy. That much is clear in the corners, but the forces exerted on your body and the way in which the AMG GT achieves speed is a unique experience in the sports car world.

Plenty of cars have bountiful amounts of horsepower. Speed, if that’s all you want, comes cheap these days. You can spend about $40,000 on a Mustang GT that gets to 60 mph in the same time as this Mercedes-AMG GT Coupe — 3.9 seconds, so says Mercedes. Instead, the AMG GT separates itself from the pack in other ways. It starts with styling. There’s no bad angle — it is, in a word, timeless. And then when you stack Mercedes levels of luxury and modern tech on top of the stonking performance, you’re left with a car lacking in obvious downsides. 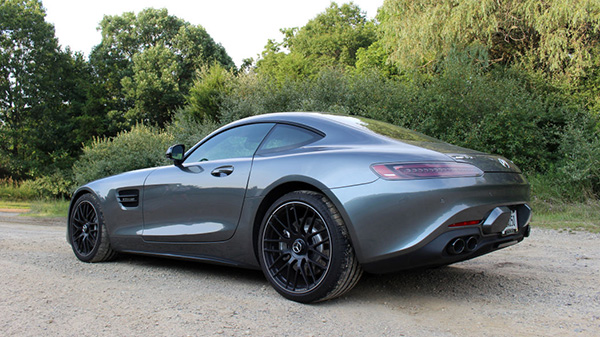 None of the above is new information if you’ve driven or even read about an AMG GT before. However, there is plenty that’s new for the 2020 model year. Mercedes has given the entire AMG GT lineup a mid-life refresh, but we’ll be focusing on the bottom rung AMG GT in this review. Of course, with an as-tested price of $131,315, the bottom rung is rather high off the ground. 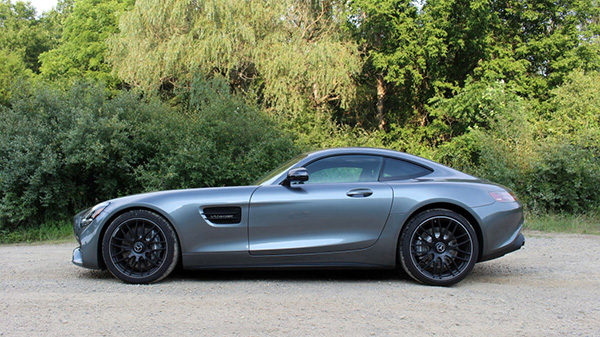 Most of the updates for 2020 come on the tech and design side of things. The tech updates bring it in line with the AMG GT 4-Door Coupe (despite the name, barely mechanically related), adding a 12.3-inch digital instrument cluster and 10.2-inch infotainment display. It had a traditional, analog gauge cluster and 8.4-inch infotainment system previously. Was it bad before? Absolutely not, but it only makes sense for Mercedes to apply its best technology to its very best sports car. You can even use Apple CarPlay and Android Auto now. 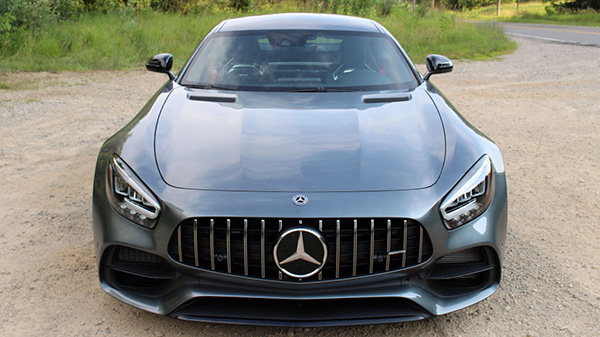 The most noticeable style change you’ll see is the application of the large AMG Panamericana grille to the front end of the base car. With its thick, vertical chrome slats, it had previously been reserved for the higher GT C and GT R models. That was a mistake, as it’s one of the few big grille designs that looks like it’s actually meant to be there. Adding it to the base car represents a massive, deserved step up in gravitas. Other, less obvious changes include new LED headlights, tinted taillights, redesigned side skirts, a new rear bumper and a redesigned quad exhaust. I adored the AMG GT’s design before, but these additions all work together to make it look even better. 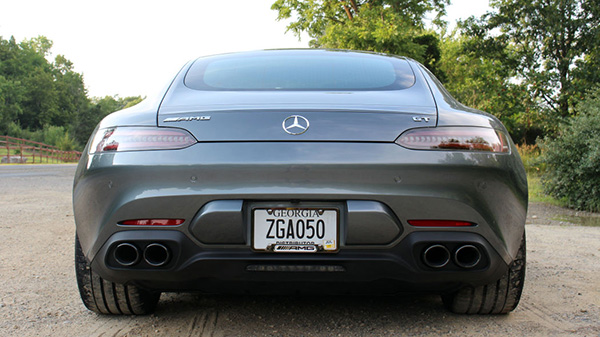 You end up turning heads everywhere you go. It turned mine every time I parked it and walked away over the course of a long weekend. In profile, it looks like something you’d dream up while doodling in school as a kid. The long-nose, short-deck profile may not be the ideal layout for handling, but it’s a timeless shape that’ll still be turning heads at Concours events 80 years from now, and nothing else on sale today pulls it off so eloquently and simply as the AMG GT. Even the sleepy Selenite Gray Metallic paint couldn’t take anything away from it, nor are the $2,200 forged wheels a must have to properly pull off the look. 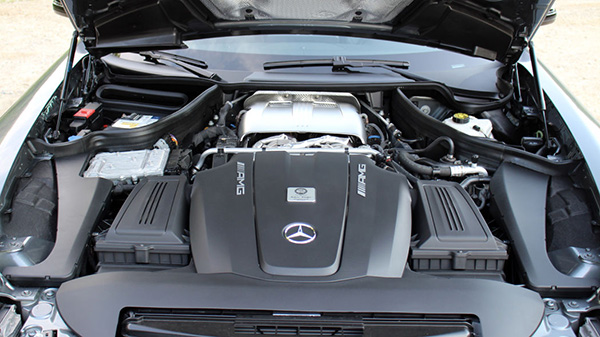 A 4.0-liter twin-turbo V8 making 469 horsepower and 465 pound-feet of torque is standard. That’s the same output as last year, and it’s more than adequate. It’s hard to believe that the AMG GT only has 469 hp from behind the wheel, because that 4.0-liter is an absolute beast from any point in the rev band. Shifts from the seven-speed dual-clutch transmission come quickly when in Sport + mode, and downshifts are just as violently immediate. Switching into manual mode is a treat, though, as the substantial, metal paddles are a joy to use with the fast transmission. The only gearbox complaint involves low-speed starts. It tends to lose its smoothness, as is typical for a DCT, but that’s only a small price to pay for great high-speed performance. 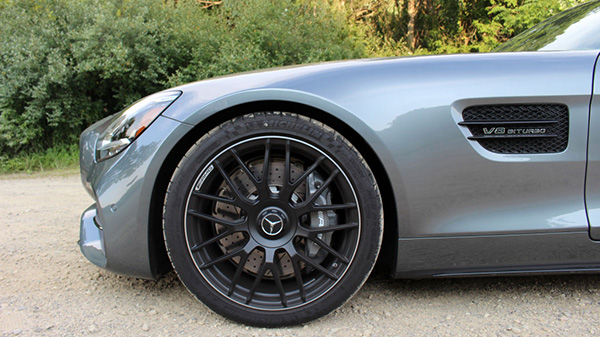 When attacking a back road, this car has a point and shoot attitude, though with all that front end hanging out in front of you, there’s a lot to point. Despite the physics looking wrong, Mercedes still managed to engineer a car that’s neutral in corners. The engine is shoved so far back in the firewall that your feet are practically in the exhaust manifolds (the engine “cover” is hilariously nearly a foot forward of the actual engine). I wouldn’t call it an easy car to drive fast, though. Once you start pushing the Michelin Pilot Super Sports, things get a little twitchy. It acts as a warning to novices that you might want to back off. That said, there’s an enormous amount of grip on hand, and this is only the base AMG GT. 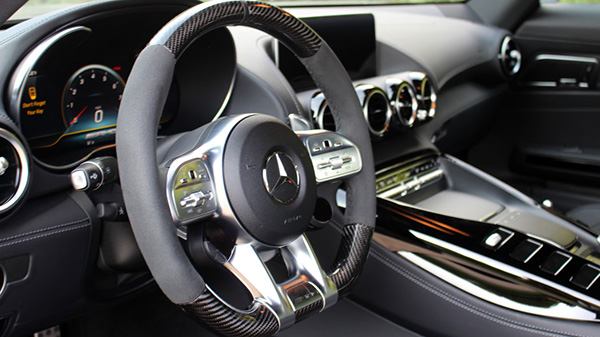 Playing with the drive modes results in drastic changes to the driving experience. Our tester’s AMG Ride Control package features an adaptive sport suspension setup with three levels of damping adjustable with a button on the center stack. It goes from semi-livable to wow that’s uncomfortable levels of harshness. Mind you, that’s in driving on Michigan roads, so everyone else will have it better than us. Even though it’s easy to turn the steering wheel-mounted mode selector, spending a few minutes playing with all the settings individually allows you to select the forgiving suspension with the maximum engine response/loudness. If nothing else, you’ll want to hit the exhaust button on every startup to have the pipes as loud as can be. It’s slightly annoying that the car doesn’t just carry over all the settings that were selected when you shut it off, but a personalized driving experience is only a couple taps away. 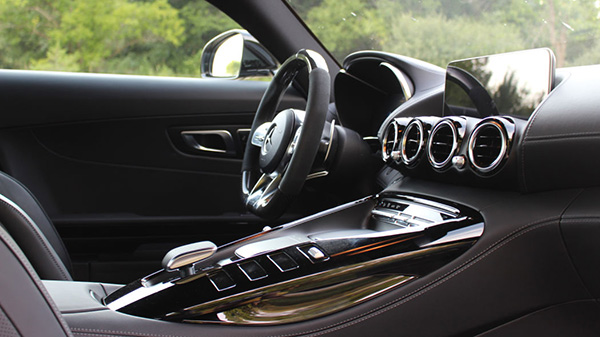 When it comes to cruising on the highway like a proper GT car, the AMG GT doesn’t entirely live up to its name. This may be the entry-level AMG sports car, but it’s loud as hell inside. Tire noise from the 255-width fronts and 295-width rears is clear and present, as is a healthy dose of wind noise above 70 mph. Even the Burmester sound system is hurt by the cabin’s general noisiness. But c’mon, shut it off and listen to the exhaust blaring and blatting right behind your ears. It’s all rather un-Mercedes-like in nature, but then again, this car was designed in-house by AMG. You can tell where the priorities were. Cut weight first, worry about sound deadening and refinement after that. Mercedes lists the AMG GT at 3,472 pounds, which makes it neither a lightweight, nor a deadweight. Visibility could be better, but Mercedes did a remarkable job for the exotic shape. You can’t see where the nose ends — thank goodness for cameras — but it’s easy to keep track of traffic out the back and in blind spots. 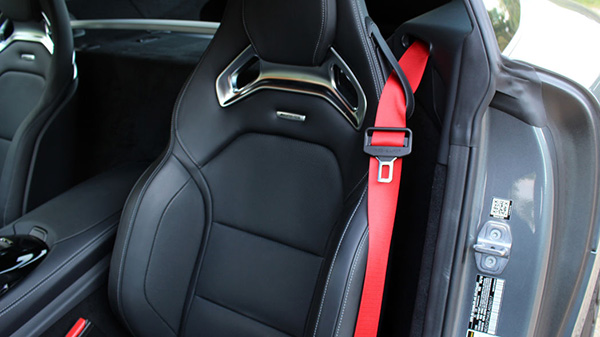 Now, about that $131,315 price. Without any options, the 2020 AMG GT starts at $116,895, which is just a hair higher than a new Porsche 911 Carrera S at $114,650. Both cars target the same clientele, and both have much more potent versions available. You just have to decide if you’re a Porsche or Mercedes kind of buyer. The 911 is iconic, but the AMG GT’s design is exotic. Mercedes only sells 1,000-2,000 AMG GTs per year, whereas Porsche is able to move around 10,000 911s. The rarer and arguably more interesting car to show up at your local cars and coffee with is the Mercedes. As for the driving experience, the Porsche has a leg up with a better range of dynamics — it’s GT car comfortable and a firecracker on a backroad — plus the 911 Carrera S is slightly quicker off the line. 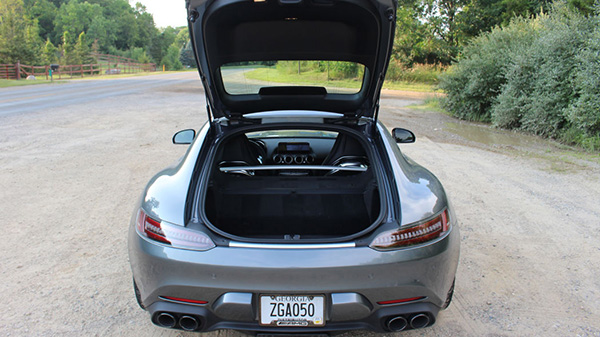 Yet, Mercedes found the necessary intangibles in the AMG GT to appeal to buyers looking beyond a 911. Everything comes back to that shape. It looks aggressive, yet beautiful at the same time. Along the way, it translates to a unique driving experience in the sports car world. There may be too many buttons and modes and screens for a purist, but this car on the right road is exactly what a proper sports car from AMG should feel like.