Never mind the Tesla EV charging stations in the background, these spy shots are all about a supercar that still has a gasoline engine. No fewer than three prototypes of the next-generation AMG GT Coupe were caught in snowy northern Sweden while the test drivers were on a lunch break. We haven’t seen the Porsche 911 rival with so little camouflage as we do now, suggesting an official reveal will take place in a matter of months, if not weeks.

The trio depicts different versions of what will essentially be Affalterbach’s coupe version of the new SL roadster. The yellow car is seemingly an AMG GT 43 judging by the quad-round exhaust tips. If our assumption is correct, power is provided by a four-cylinder 2.0-liter engine with an F1-derived electric exhaust gas turbocharger. In the mechanically related SL43, it’s good for 381 horsepower (284 kilowatts) at 6,750 rpm and 354 pound-feet (480 Newton-meters) of torque starting at 3,250 rpm. 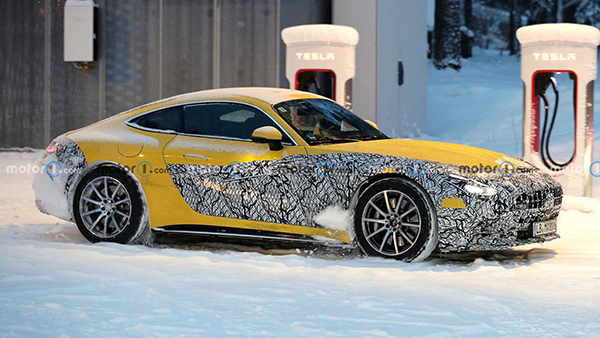 Up next is the green car with a charging port cap on the rear bumper, revealing it has a plug-in hybrid powertrain. It might carry over the PHEV setup of the new AMG C63. Yes, that would mean yet another four-cylinder version. It would also use the same M139 engine originally developed for the compact “45” cars before getting a longitudinally mounted configuration for bigger AMGs. In the (takes deep breath) 2024 Mercedes-AMG C63 S E Performance, the electrified setup churns 671 hp and 752 lb-ft (1,020 Nm). 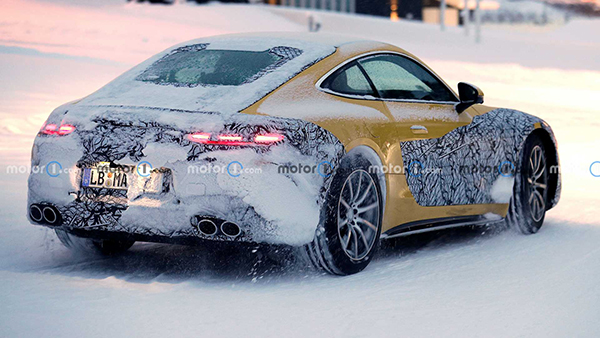 In all instances, the SL’s coupe sibling should be a tad lighter courtesy of a fixed metal roof instead of an electrically folding soft top. In addition, the GT is expected to remain strictly a two-seat affair whereas the latest SL has a 2+2 layout. While the latter is about comfort, the former should prioritize a more thrilling driving experience with stiffer suspension and sharper steering.

Future additions to the range will include track-oriented flavors and a flagship plug-in hybrid with the same drivetrain used in the GT 63 S E-Performance. That would mean an electrified V8 making a whopping 831 hp and 1,084 lb-ft (1,470 Nm). Near the end of the life cycle, there could be another hardcore Black Series. Meanwhile, we’re hoping the inline-six will remain for some models.