While we wait for an opportunity to experience the ONE hypercar, the Mercedes-AMG GT Black Series remains the most extreme road-going car from the Silver Arrows of the last two decades. While some may believe it to be an overpriced Mercedes-AMG GT R, Jay Leno has brought an example to his show to explain why it is much more than that.

Motorsport hall of fame member and AMG Brand Ambassador Tommy Kendall is joined by one of the 1,700 units produced, with this particular example being owned by renowned Croatian-Canadian businessman Robert Herjavec. If the livery applied to this car looks a bit familiar, that’s because it forms part of the Project One Edition, which was only made available to customers who placed an order for the abovementioned Formula 1-based hypercar.

Kendall uses this opportunity to explain to us why the Black Series isn’t just a GT with some wings and spoilers slapped on but rather how each altered component has been added to improve elements such as cooling, downforce, and weight. The star of the show is the twin-turbo 4.0-liter V8 which uses a flat-plane crankshaft that is quite different from the lower models’ cross-plane design. The result is a power output of 720 horsepower and 690 lb-ft of torque.

Thanks to this extensive redesign of the car, AMG was able to turn its halo GT into the fastest car on the Nurburgring Nordschliefe, technically speaking. Its time of 6:43.62 minutes is only bested by the likes of the McLaren P1 LM and Porsche 911 GT2 RS by Manthey Racing. Much unlike the AMG, these are two track-biased cars that have been extensively revised by aftermarket manufacturers. 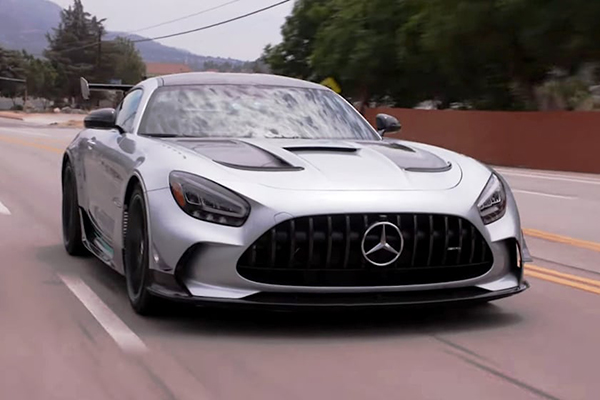 Unfortunately, Leno didn’t get to take the Black Series on the track to put all of this to the test, but he gives it a good series of sprints through the suburbs to get a feeling for the drivetrain and chassis, bumps and all. Although Leno sings its praises, we cannot help but notice he isn’t quite as excited to be behind the wheel compared to when he took his 1959 Austin-Healey Sprite for a ride a few months ago.

In AMG’s pursuit of lap times, we question whether the car could have been made more engaging. Then again, Leno is an old soul whose tastes gravitate towards cars that are interesting rather than just insane.