Mercedes-Benz has facelifted the A-Class. Can you tell? Look closer. The posh, premium family hatch – and saloon – now has a pair of ‘power bulges’ on the bonnet, a revised front bumper design and new star-pattern radiator grille. 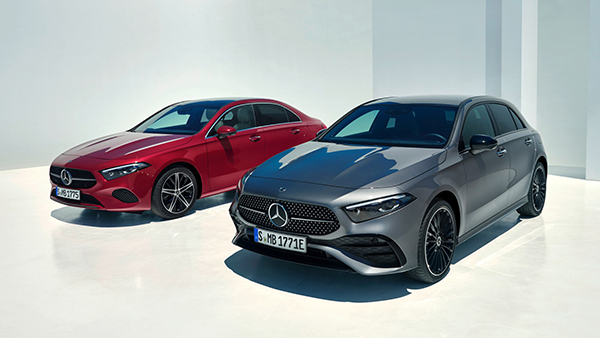 The headlights are also ‘flatter’ – but only optionally LED. Something you get as standard on a Ford Fiesta these days. Beyond this, the updates to the A-Class are largely infotainment and safety related, though the petrol engines have moved to mild-hybrid tech as well, including for A35 AMG model.

Eesh. So what’s new about the digital stuff?
Mercedes says ‘both hardware and software have taken a major leap forward’, but hasn’t been super-detailed about the specifics.

There are three new display ‘styles’ for the screens on the dash and ahead of the driver: Classic, Sporty and Discreet. Plus three modes – Navigation, Assistance and Service – and seven ‘colour worlds’.

The MBUX infotainment system is now said to better speech recognition, and you’ll soon be able to identify yourself to the car using a fingerprint, something that’s planned for quarter one of 2023. There are more USB ports, wireless charging and wireless Android Auto and Apple Carplay, too.

German buyers will also be able to experience a new ‘Tourguide’ mode. Go ‘Hey Mercedes, start Tourguide’ and it will start relaying points of interest and tourist information as you drive – something Mercedes has been experimenting with on launches for years. No news yet on when this might reach the UK… 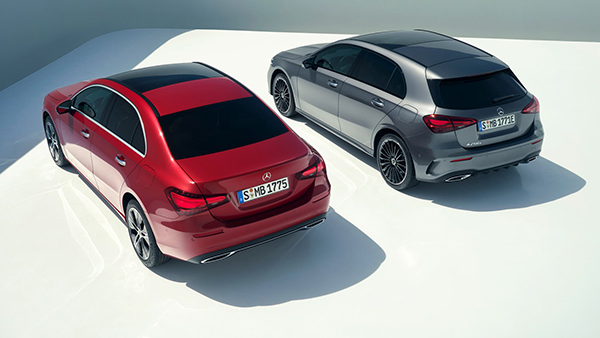 Is the new A-Class safer than before?
Well, the Driver Assistance Package has been updated – which apparently means the Active Steering Control is now better (‘much more comfortable‘) at managing the Lane Keeping Assist.

What about trim levels?
There are three: base, Progressive and AMG Line.

The AMG Line gets brushed aluminium instead, plus contrasting red stitching. There’s also a new rear diffuser on the outside.

Mercedes has collected more popular options into packages to simplify the ordering process, saying the decisions made are based on previous customer behaviour. 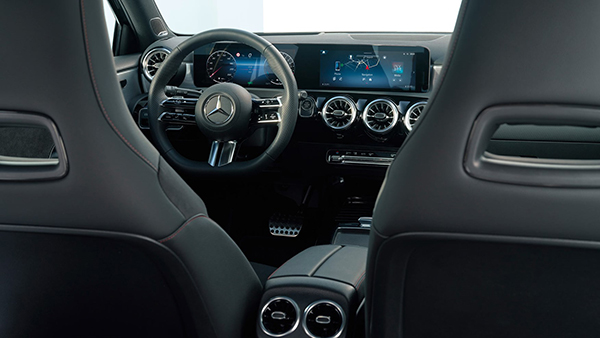 Are all the A-Class engines mild-hybrid now?
All the petrol engines do now come with a 48v mild-hybrid system, including a belt-driven starter-generator for smoother operation, bigger fuel savings and a 10kW power boost when moving off – that’s just over 13bhp. Four-cylinder models come with an automatic transmission as standard as well – either a seven- or eight-speed DCT.

This includes the 302bhp Mercedes-AMG A35, which now gets the eight-speed DCT and the 48v system as well.

Mercedes does still build A-Class diesel models, but barely mentions them in the facelift info.

The plug-in hybrid A250e models, however, benefit from an improved battery and more powerful 80kW (107bhp) electric motor, increasing WLTP driving range up to as much as 50 miles per charge.

Anything else new for the A-Class AMG models?
The A35 is now closer in appearance to the A45 S, while all models gain new alloy wheel designs and new taillamps.

At market launch for the revised A-Class there will also be a limited-edition version of the 415bhp A45 S called the AMG Street Style Edition. This is finished in mountain grey magno paint with edition-specific foiling that features a colour gradient in black / anthracite matte – plus colour accents in fluorescent orange.

In case that was all too, er, tasteful, it’s been combined with matte black alloys, red brake calipers and interior with more bright orange accents. The aluminium trim elements mirror the exterior foiling.

The AMG Street Style comes with the AMG Aerodynamics Package, both Night Packages and the stand-alone AMG fuel filler cap, too.

When does the new A-Class go on sale?
No word on pricing or exact on-sale date just yet, but expect to be able to order one before the end of 2022 ahead of deliveries in 2023. As ever, we expect the new A-Class to be a tough challenge to its rivals.