Mercedes A-Class was Britain’s fourth best-selling car in 2021 but has dropped out of the top 10 so far this year. Hoping to reinvigorate sales, Mercedes has given the A-Class plenty of tweaks inside and out to freshen it up for 2022 and beyond. 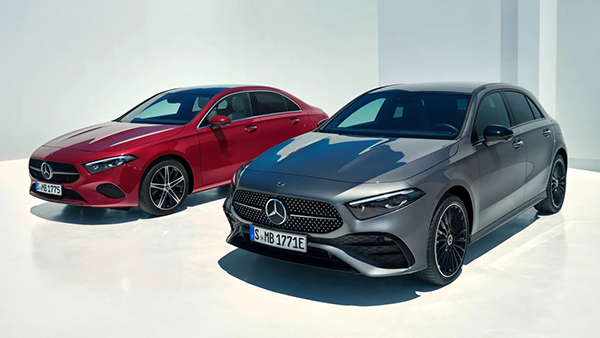 The A-Class is on sale now and Mercedes has announced pricing for the premium hatchback, which starts from £31,880. The updated A-Class features a revised exterior and new on-board technology.

As suggested by previous spy shots, the front bumper gets a slightly different lower grille opening and the main grille itself has been reshaped – although the quintessential larger three-pointed star badge is still there. The bonnet gains two bulges for some added aggression. Around the side you’ll find a new selection of alloy wheels.

The new A-Class will once again rival the Audi A3 and BMW 1 Series in the premium hatchback market and a key battleground will be interior technology. The outgoing model featured a seven-inch screen and 10.25-inch display as standard, with a pair of 10.25-inch displays available as an option. Mercedes has retained this line-up for the facelifted model.

The entry-level Sport Executive gains 17-inch alloy wheels, with the model-topping AMG Line Premium Plus getting 19-inch rims. Premium Plus models will also receive a heads-up display and Mercedes’ MBUX “interior assistant” as well as the 360 degree camera as standard.

The infotainment system itself has changed, because the car gets the latest generation of MBUX. The display style can be changed between “Classic”, showing the usual relevant driver information, “Sporty” with a more pronounced rev counter and “Discreet’ for less information on show overall.

Extra equipment, such as an additional USB-C port and a fingerprint sensor, is also available and as you’d expect, there’s smartphone compatibility with Apple CarPlay and Android Auto Wireless. The MBUX upgrade also means the voice assistance is “even more capable of dialogue and learning”, claims Mercedes.

Mercedes has given the facelifted A-Class some new powertrain options as well. Every petrol engine is now electrified, with a seven-speed or eight-speed automatic gearbox as standard. The new mild-hybrid system includes a 48V motor which Mercedes says “supports agility when starting off with an extra 13bhp”.

Mercedes has decided to persevere with the diesel variants of the A-Class. The range starts with the A 180 d, which has 114bhp and 280Nm of torque from a 2.0-litre, four-cylinder unit – enough for a 0-62mph time of 9.9 seconds. There are also more powerful diesels in the shape of the 148bhp A 200 d and 188bhp A 220 d – both of which come retuned versions of the same engine.

As for the plug-in hybrids, the A 250 e’s powertrain has been fettled to improve power, says Mercedes. There’s 7bhp more (now 161bhp in total) and 270Nm of torque on offer. That’s enough for a 7.4-second 0-62mph time in the hatchback and 7.5 seconds for the saloon.

Efficiency has also been upgraded with this facelift. The A 250 e can now reach 50 miles of pure-electric running (51 miles for the saloon) and charging has been upped from 7.4kW to 11kW – although this three-phase setting won’t be much use to most UK customers. Mercedes claims the DC charge to 80 per cent is unchanged, with an expected charge time of 25 minutes.