You join me today with, arguably one of the UK’s fastest A45S AMG’s! In this video, however, I’m able to take the car out for a drive myself to see what it’s really like…! (P.S. Apologies for the poor audio towards the end of the video during the driving scene.)

This A45 AMG is “stage 2” and makes about 500 horsepower. It rivals AMG models with much bigger engines and price tags.

We don’t get the A45 here in the US. It’s a shame because such a car would be a hoot. But, alas, MBUSA deems the A-class hatchback as unworthy of our adoration. We do get the GLA 45, which is kinda the same. But the hatch is cooler. Apologies for using a rant as an intro, but this Euro-spec A45 S AMG is a reminder of just how awesome these cars are.

This one in particular is from the UK, and YouTuber hampshirephoto is about to take it out for a test ride. Host Luke explains that this one is rare in that it is a modified A45 S. He describes it as a “stage 2” build with about 500 horsepower. As a side note, can we talk about “stage” modifications? The meaning of each particular stage apparenely varies from one car to the next. One person’s “Stage 2” build could actually be another’s “Stage 1.” So for this instance, we’ll reference the work actually performed on this A45 S. A tune was completed on the ECU, and a downpipe was added. Simple stuff, really. Oops, another rant. But on the plus side, those simple mods really wake up the A45. 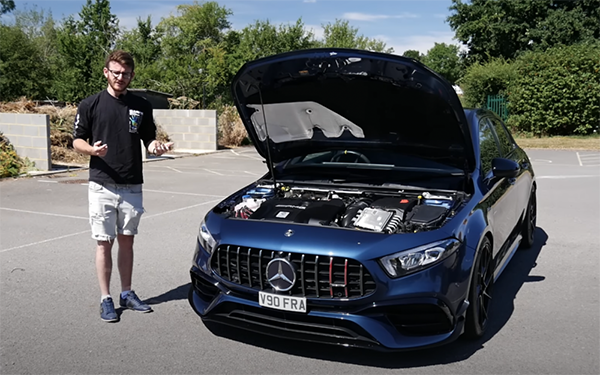 This car’s 0-60 time is claimed to be about 3.1 seconds. That’s a big improvement over the car’s standard spec of 3.9 seconds to cover the same speed. And remember, all you’re changing is the ECU tune and exchanging one exhaust part. The car doesn’t even really become any louder. It just becomes better. In reality, it means the car remains docile, and fully a Mercedes when you’re not on the loud pedal. Low RPM torque and the ease at which the engine propels the A-class along makes the overall experience feel even faster than the 500 ponies would suggest. We won’t say the M133 is a better engine than the M113K. At least not till one thing changes; aftermarket support.

In this video it is claimed not many A45 models are modified. And while that may be true in the UK, we know of plenty. RENNtech is an easy first thought when looking to tune your A45. In fact, they do have a kit that will nearly replicate the numbers found in your GLA45 AMG. Their tune makes 490 horsepower. They also made a version with about 600 horsepower. Which, if you really think about it, is plenty enough in a GLA45 AMG. But we still wish the US market would get the hatchback.