Mercedes has given its A-Class a facelift for 2022, meaning new tweaks are in store for the AMG-fettled A 35 and A 45 performance hatches. Although the mid-life refresh doesn’t see any changes in the way of performance figures, Mercedes has worked on the exterior design of the A 35 and A 45, while giving both more equipment as standard. 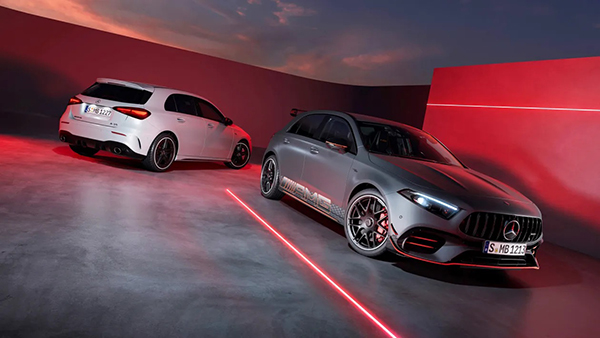 We’ve seen the facelifted A 35 and A 45 testing for a while, so the revisions to the bodywork aren’t too much of a surprise. Mercedes has played it safe with the update, adding new front headlights, a redesigned AMG-specific ‘Panamericana’ radiator grille and a new bonnet badge. The front bumper receives a new lower lip design in connection with the standard car’s revised side air intakes, above it we can see new “power bulges” on the bonnet. A new 19-inch alloy wheel is now available and towards the rear we can see the facelifted A-Class redesigned rear lights and lip spoiler. Circular exhaust pipes distinguish the A 35 model from the A 45 – which feature quad-exhaust tips.

Inside the new AMG hot hatches there’s the AMG Performance steering wheel – now offered as standard and AMG performance seats – trimmed in sage grey. Like the standard A-Class, the A 35 and A 45 both get the latest MBUX system, featuring improved voice assistance and new driver’s display menus. Mercedes-AMG has also added its new “Track Pace” app as standard on the A45 S 4MATIC+. The system is capable of showing drag strip times, lap times and even recording the driver’s achievements on circuits around the world.

The arrival of the facelifted Mercedes-AMG A 45 coincides with the launch of the AMG Street Style Edition. The limited edition model is based on the A 45 S and finished in “grey magno” paint with orange accents. The Aerodynamics Package is included – adding the rear spoiler and front canards. Inside, the AMG Street Style Edition comes with black Performance seats, stitched in orange and an ‘A 45 S’ logo is embroidered onto the headrests.

Powering the A 35 is a hybridised version of the old car’s 2.0-litre, turbocharged four-cylinder. Mercedes says the new 48V auxiliary power supply adds an extra 13bhp on start up, however total power figures remain the same at 301bhp and 400Nm of torque. The performance numbers are also unchanged – 0-62mph takes 4.8 seconds in the saloon, with the hatchback taking 4.7 seconds. Top speed is limited to 155mph.

The AMG A 45 keeps its title as the most powerful hot hatchback on sale, with its turbocharged 2.0-litre four-cylinder petrol engine chucking out a massive 415bhp and 500Nm of torque. Like in the A 35, power is sent to all-four wheels – resulting in a 3.9-second 0-62mph time and a de-limited top speed of 168mph.