Through the years, Mercedes-Benz has been the diagram of what luxury and elegance are all about. For decades, they have been building cars that make you feel like you are floating on a little cloud. But what happens when you bring mind-bending performance to this quiet world? Well, let’s ask AMG.

First of all, let’s take a quick trip down memory lane. Mercedes has been building cars for more than a century, and their focus has always been on the high-end, elegant customer base. With that said, that doesn’t mean that they built only soft, grandpa cars. Not by a long shot.

Mercedes has always been present in motor racing in one way or another. Cars like the original W125 Silver Arrows from the 1930s or the W194 300 SL of the 1950s are the equivalent of rockstars when it comes to the racing world. But these are special cars, built with racing in mind. So what happens when you do things the other way around? Well, that is what AMG did, thus giving birth to one of the most notorious names in the going-fast industry.

AMG’s very beginning was modifying a “boring” Mercedes sedan to tear up the track, which resulted in the birth of “The Red Pig”, a full-sized sedan that blew the doors of purpose-built race cars. It started life as your average grandpa car, but after AMG got their greasy hands on it, it transformed. They heavily modified it, making it wider, lower and, most importantly faster – which they achieved by taking the original 6.3-liter (384 ci) V8 to 6.8 liters (415 ci).

And they still have that same drive and objective in mind. While models of today are arguably tamer and more assisted and precise, the old AMG cars had a severe case of split personality. When driving normally, they were quiet and comfortable, making you feel like you are floating on a little puffy cloud. But tap the throttle a little bit, and the monster under the hood would awaken, bellowing like a wild animal while tearing the rear tires apart in a matter of minutes.

Fast forward to 2022, and AMG sent into the world the ultra-limited edition Formula 1-inspired One hypercar. At over 1,000 horsepower, it is the most powerful model they have ever built.

Staying on the topic of cars made entirely from ground zero, we have one of the best vehicles to come out of the AMG’s insane mind and that was the SLS.

The Mercedes-Benz SLS AMG is, at least in our hearts, the successor to the legend, 300 SL Gullwing. The ’50s car was ahead of its time, with a fuel-injected straight-six under the hood and those doors that turned heads whenever they popped open. It was as classy and elegant as any car can be, and decades later, the SLS strived to achieve that same feeling and status in terms of looks and engineering.

And the SLS bears some resemblance to the original featuring a few subtle hints from the 300 SL. It has a long hood and a short rear end, sleek vents here and there, it is low and muscular, but most importantly, it has the spectacular Gullwing doors.

The SLS didn’t want to be shouty, in Mercedes fashion, being classy was the focus, even for a supercar. And if you fancy feeling like an absolute baller every time you get in or out of it, this one is up at auction in Pompano Beach, Florida. And it’s a good one. 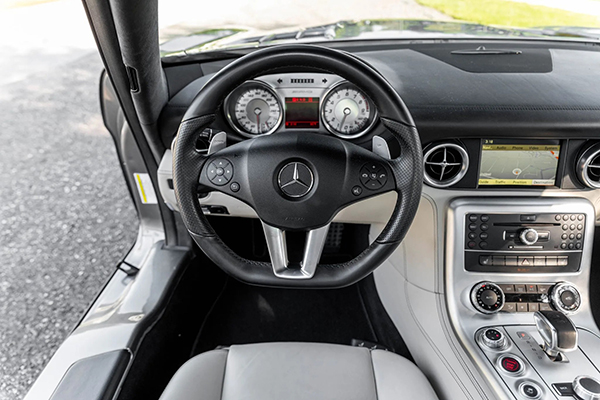 This particular SLS is in good condition, with only 17,000 miles (27,300 km) on the clock. It is finished in AMG Imola Gray paint with a white leather interior. So, it looks the part. Now let’s talk about performance.

AMG made sure to shove something powerful enough under the hood to match the pretty looks. It has a 6.2-liter (378 ci) V8 – despite the 6.3 badging, as that designation is only there as an homage. The 563 hp (571 ps) engine drives the rear wheels through a 7-speed dual-clutch transmission, to ensure that the rear tires will scream in agony.

If you choose to buy it, you will get it with a build sheet, recent service records, a clean Carfax report, and a clean Florida title, so the only thing left for you to do will be to get in, make a lot of noise and drive it like you stole it.

The Mercedes-Benz SLS AMG is one of the last of its kind. It’s got that big V8, rear-wheel drive, and you, the driver, in control, not some electronic device. The current bid stands at $122,040. AMG, and the car industry as a whole, is moving towards a tamer, safer, downsized future.

The Affalterbach-based performance brand has announced that they will ditch the V8s in favor of 4-cylinder engines in electrified setups, they are using more and more technology to make the cars safer and easier to drive, and that goes for almost every manufacturer. While that’s a good thing, the era of rowdy, dangerous, and exciting cars is gone, so get them while you still can.