Every car manufacturer from Mazda to McLaren offers a car audio packages on their new vehicles. Packages usually vary greatly in quality and price. Depending on the trim level or package, you may be looking at a couple hundred dollars up to thousands for more advanced and complex audio units. As technology continues to evolve year after year, audio quality and hardware are no different. This leaves consumers with a difficult choice. Is upgrading your SLS car audio worth it?

There so many different things you can upgrade on a car. If so, what can you get with your monies worth? The answer to this question may very well depend on how much of an “audiophile” you happen to be. If enjoying music during the drive and high-quality sound is a deal breaker for you, well, most entry-level OEM speaker systems won’t cut it.

What if an upgraded OEM option from reputable brands such as Harmon/Kardon or Bang & Olfsen still isn’t enough? Welcome to bespoke high-end audio! Thanks to Shmee150 on YouTube, we get to witness the process as his stunning SLS Black Series get taken in to Cambridge Car Audio for a serious audio upgrade. When we say serious, we are talking $10k+ on the bespoke details for this audio system. Let’s find out exactly what that entails. 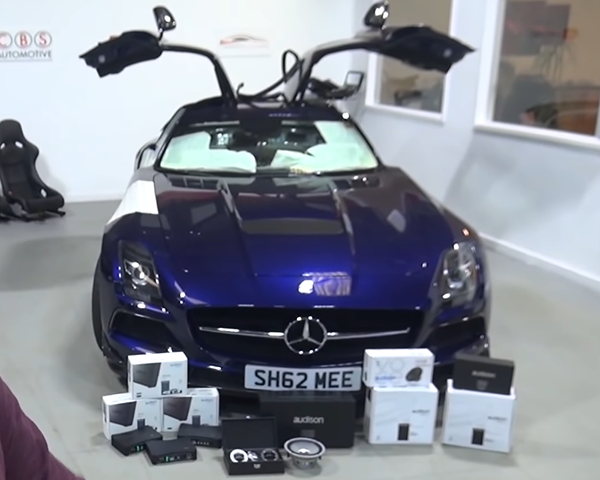 Upgrading the SLS’ Audio Is No Simple Task
To start, Shmee150, real name Tim Burton, explains to us a bit about his SLS and the obvious constraints there is when fitting 8 speakers and 3 amplifiers into a single 2 seater supercar cabin. Burton explains that even though there were only 300 SLS Black Series produced, even fewer were optioned out with the highest trim audio system. His particular SLS for example, has speaker grills near the door handle, but neither of them have speakers in them as the car never optioned the package. While Burton enjoyed the Bang Olfsen audio package that came with the rare Black Series, he still felt that the audio quality was still not up to par with the rest of the vehicle’s stunning characteristics. So in order to alleviate the issue, some upgrades were in order.

Cambridge Car Audio provided Burton with a completely bespoke audio system composed of eight total speakers: two tweeters, two mid-range woofers, two mid-bass woofers, and two 8-inch subwoofers. All of these components will need serious power to be able to push this much sound, so there will be three separate amplifiers for all the components. Not to mention, the SLS will also be receiving an upgraded head unit with modern integrations like Android Auto and Apple Car Play. One of the biggest downsides of older vehicles is the inability to adapt modern technology with systems such as infotainment. Burton made sure he had all his avenues covered. 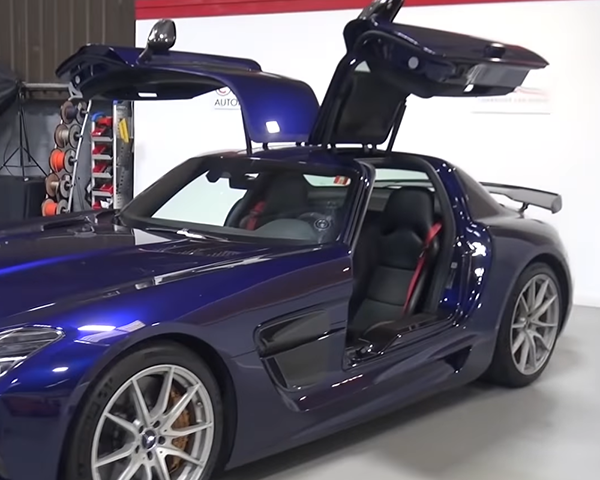 As you may imagine, with a price tag as steep as system Burton is installing, there has to be more to it than the high price of the hardware. At Cambridge Car Audio, they actually are handcrafting panels, boxes, and housings for these speakers to be placed in the cabin. This means custom design, fabrication, fitting, painting, installation and wiring. For example, each speaker that is placed in the cabin has its audio profile measured by a laser to understand the direction of sound for the listener. This will allow them to build a perfect soundscape for this particular cabin. Just one of the many details that goes into an audio setup at this level and price point.

The tweeters will sit in a custom housing built along the A-pillar. The dual 8-inch subs will also have fiberglass housings constructed into the rear bulkhead behind the seats. Not to mention, the job of fitting three relatively large amplifiers into the same cabin that barely has enough space to place a cup of coffee! All in all, the custom work will take Cambridge Car Audio about a month or so to get perfect for a car as beautiful and deserving as the SLS Black Series. While you might not have to go all out like Burton on his audio system, trust us, your ears will be a lot happier with some better quality hardware behind the wheel.