Few sports cars have such a storied history as the Mercedes SL, but for the last several generations, the German “Sport-Leicht” (Sport Light) has leaned more towards being a grand touring luxury car than a Porsche 911 rival. With the 2022 Mercedes-AMG SL 55, the message is clear: Mercedes wants the SL taken seriously again.

The previous SL was overshadowed by the excellent S-Class Cabriolet and AMG GT Roadster. The former was larger and grander than the SL, while the latter was sharper and more engaging to drive. With those models both culled from the lineup, the SL is left to shine as the flagship AMG product… at least until the next GT arrives.

CarBuzz recently spent a week in the SL 55, the slowest model available in the US market (we don’t get the SL 43). Having driven the SL 63 at the launch event, our time in the lesser AMG proved that the base model is more than enough, and we’d even consider buying one over a Porsche 911 (cue the gasps).

Design: From Forgettable To Fetching
Styling may be subjective, but we don’t recall anyone praising the outgoing R231 SL for being one of the prettier sports cars on the road. This new R232 model is a major improvement in every way, including the fabric convertible top, which replaces the outgoing SL’s folding metal roof. Not only does the cloth top look more traditional, but it also saves around 46 pounds.

It’s obvious the AMG is targeting a younger audience with this car; it explains why the color palette now includes bolder hues like Sun Yellow, Hyper Blue Metallic, and our tester’s Patagonia Red Metallic. It’s paired with either a black or red soft top. There are various wheel options available depending on whether you want a Touring or Performance focus for your SL, including the functional 20-inch AMG aero wheels on our tester that reduce drag.

Interior: A True Benz
Call it gorgeous or call it gaudy, but the SL’s interior is certainly interesting. It comes with more standard features than you get in most other sports cars, including massaging front seats with heating and ventilation, a Burmester surround sound system, a surround-view camera, a 12.3-inch digital instrument cluster, and an 11.9-inch central touchscreen display. What we just described would cost an arm and a leg from Porsche’s options list. As it stands, the SL 55 has active multi-contour front seats and an AirScarf neck-level heating system to emphasize comfort.

As you’d expect from Mercedes, the technology is overwhelming, but not always in a good way. We’d like to see a few more physical buttons for functions like the roof operation and front-end nose lift, but the MBUX infotainment system learns your behavior and will eventually populate the screen with shortcuts for commonly-used menus. Just like a 911, the back seat is completely useless for people, but it’s a decent area to throw a grocery bag or two in a pinch. 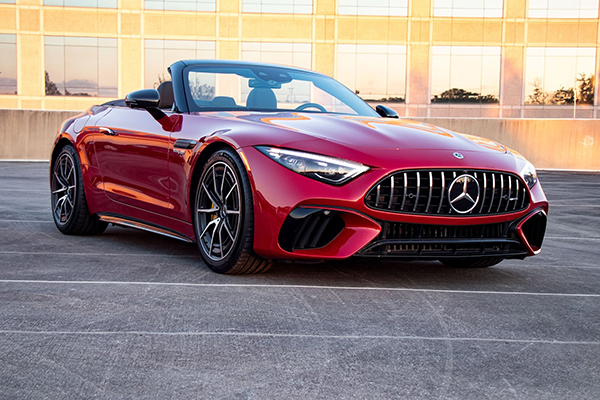 Performance: 55 Is Enough
Stomp on the throttle, and the SL 55’s launch control can take the car to 60 mph in just 3.8 seconds. With 108 additional horses on tap, the SL 63 cuts that time down to 3.5 seconds. That’s not the type of difference you can feel unless you have the two lined up side-by-side in a drag race. The SL 63’s wider power and torque band make it feel quicker with more immediate acceleration, but at no point during our week of testing did the SL 55 feel even remotely sluggish.

Driving: A Cruiser And A Bruiser
The new SL enters the Mercedes lineup with three near-impossible tasks: fill the hole left by the S63 Cabriolet as a cruiser, replace the AMG GT Roadster as a drop-top sports car, and battle one of the most iconic sports car nameplates of all time: the Porsche 911. We think the SL accomplishes all three.

With the hydraulic suspension, the SL offers similar comfort as the old S63 (if not a bit firmer) while being much more engaging to drive. Not only does it soak up bumps, but the Active Ride Control replaces the traditional antiroll bar, helping the car remain perfectly level through corners. It’s almost like a cheat code, as the heavy SL controls its weight really well, even at ballistic speeds. Standard rear-axle steering further adds to the car’s agile nature.

As an indirect replacement for the AMG GT Roadster, the SL lacks the harshness and brutality of the outgoing GT, but that’s not necessarily a bad thing. Unless your commute is on Angeles Crest, the SL serves as a daily driver that is far superior to the old GT or even the new 911. It lacks the 911’s sharp steering, but it makes up for it with a much throatier exhaust note and a nicer interior. This is still a luxurious car, but it leans more heavily towards being a true sports car than any modern SL.

The SL completely transforms from tranquil to outrageous with a turn of the drive mode dial. Race mode awakens the new nine-speed Speedshift MCT transmission, which replaces the traditional torque converter with a wet clutch. The MCT takes the best of a dual-clutch and combines it with the smoothness of an automatic in traffic. Is it PDK good? Not quite; but like the SL overall, it’s not far off.

If we were in the market for an automatic convertible sports car, we’d happily pick the AMG SL 55. The 911 works best as a coupe, and we’d personally want one with a manual transmission, which the SL doesn’t offer. A comparable Carrera S Cabriolet starts at $135,800, but it doesn’t include half the features found in the Mercedes, and the insane number of options can easily push it into SL 63 territory. We still love the cheaper (and throatier) Lexus LC, but it doesn’t hold a candle to the SL in terms of performance or technology. As a fast daily driver luxury sports car, it’s tough to beat the SL right now.