The company known today as Mercedes-Benz is widely regarded as being the inventor of the car thanks to Karl Benz and his Benz Patent-Motorwagen (“patent motorcar”) from the late 1880s. The three-wheeled, rear-engined vehicle with its single-cylinder 954cc four-stroke engine produced a mighty 0.75 hp and was the beginning of an incredible story.

Carwow had the special opportunity to check out some of the company’s greatest hits and test their 0-60 mph capabilities, even though some of these cars were never really about outright performance. Mat Watson had access to what I personally consider to be the most beautiful car ever made, the 300 SL Gullwing, as well as the majestic Pullman and one of the several C111 concepts. All in, Carwow says the ten cars have a combined value of £50 million, which works out to $64.2M at today’s exchange rates.

For a car built back in 1955, a 0 to 60 mph time of 9.4 seconds is not too shabby. We’re talking about the gorgeous Gullwing with its straight-six 3.0-liter engine making 215 horsepower back in the day. Next up was another car with gullwing doors, the V8-powered C111 with its dogleg gearbox that was nearly as quick as the 300 SL, at 10.28 seconds. 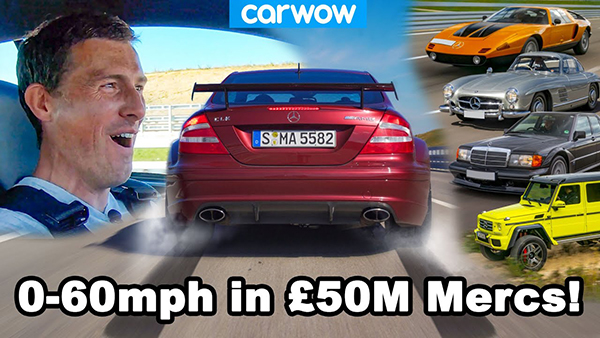 We won’t spoil the full results, but let’s just say the classic Pullman was in no hurry to reach 60 mph. Carwow then hops behind the wheel of a hugely successful model by putting a 230E through its paces while appreciating its rock-solid build quality. After that, it’s Hammer time, with a 1988 300E AMG powered by a mighty 6.0-liter V8 with 385 hp on tap. Mat Watson then tests another performance sedan, namely the 190E 2.5-16 Evolution, before switching to a timeless 560 SEC.

For something more modern, the remaining three cars are the CLK DTM AMG Coupe, a CL 65, and the bonkers G500 4×42. Showing how far Mercedes and AMG have come in terms of performance, the latest A45 S compact hot hatch featured at the end of the video is quicker than all those incredible machines, even though many of them have significantly larger engines.