Reviewed is this incredibly well preserved Mercedes-Benz 280SL Roadster from Mercedes-Benz, a (final year of production) 1971 model in Signature Silver over Black leather. This is an incredibly solid car that has seen only a cosmetic restoration, with work done to the paint, mechanicals, and interior. Much of the mechanical restoration was performed by Black Forest Motors, a leading repair/restoration center for vintage Mercedes-Benz vehicles. There are receipts for well over $50K in the last few years, including a full overhaul of the engine/fuel system, brakes, axles, and driveline. Cosmetically, the paint is not original, but high quality and properly executed, and the interior leather, carpets, wood, and may controls have been refreshed. The Becker Europa II has been upgraded with a modern auxiliary input, and the air conditioning has been overhauled and remains far colder than in most older German cars. In addition to the extensive service records dating back to the 1980s, the original manuals books, and tools are still with the car, tracing it’s ownership back decades – it is believed this is a 3-owner car.

The German manufacturer’s SL (Sport-Leicht, or Sport Light) Class was introduced in 1954 when a road-legal version of the Le Mans-winning W194 race car was revealed at the New York International Auto Show. Dubbed 300 SL, the gull-winged coupe was one of the first thoroughbred supercars; to this day, it remains the most sought-after Mercedes-Benz.

A year later, it was joined by a roadster version called 190 SL. Produced in 25,881 units as opposed to only 3,258 examples of the 300 SL, it was more attainable and affordable, but also a lot less powerful. Gone was the 240-hp, 3.0-liter, straight-six of the coupe and instead, the heavier roadster had to do with a smaller four-cylinder that could barely make over 100 horses. Despite this, the 190 SL sold well. which encouraged management to start developing a successor.

Initially, Mercedes-Benz Technical Director, Prof. Fritz Nallinger, and his team put together a W127-based car powered by a fuel-injected 2.2-liter M127 inline-six and planned to mass-produce it from 1957 onwards. Unfortunately for them, technical issues kept postponing the debut of the all-new 220 SL and as 1960 approached, Nallinger decided to go back to the drawing board.

Starting with new manufacturing tech pioneered on the W112 S-Class and the “fin tail” W 111 sedan’s platform, which was shortened by 11.8 inches (30 cm), the team managed to develop arguably the most advanced roadster available on the market at that time. Christened 230 SL and internally designated W113, the car was first shown to the public at the Geneva Motor Show in March 1963.

Designed and refined by Mercedes-Benz legends Friedrich Geiger, Béla Barényi, and Paul Bracq, the W113 was the first sports car with a safety body. It had front and rear crumple zones with shock-absorbing sections, or a rigid passenger cell with no hard corners and edges. Moreover, it was available with a removable hardtop that increased rollover protection. The shape of this beautifully-designed structure resembled the tiered towers of East Asia, which inspired the car’s iconic “Pagoda” nickname.

The suspension featured double wishbones at the front and an independent single-joint, low-pivot swing rear-axle at the rear, while the dual-circuit brake system had front disc brakes and power-assisted rear drum brakes.

As its name implies, it was powered by a 2.3-liter based on the venerable M180 straight-six. Codenamed M127.II, the engine received a completely new cylinder head, a redesigned camshaft, and mechanical Bosch multi-port fuel injection. Mated to either a four-speed manual or an optional hydraulic-coupled automatic with the same number of gears, the engine could produce 148 hp and 145 lb-ft (196 Nm). This wasn’t a huge improvement over the inline-four of the 190 SL, especially since the new roadster was around 220 lbs. (100 kg) heavier, yet combined with the short wheelbase chassis and the advanced suspension, it made the 230 SL a formidable sports car.

Chief Engineer Rudolf Uhlenhaut showed just how good it was on the difficult Annemasse Vétraz-Monthoux race track where he recorded a lap time of 47.5 seconds. Shortly after, professional Grand Prix driver Mike Parkes took his V12-powered Ferrari 250 GT for a spin around the same track, putting up a 47.3-second lap. 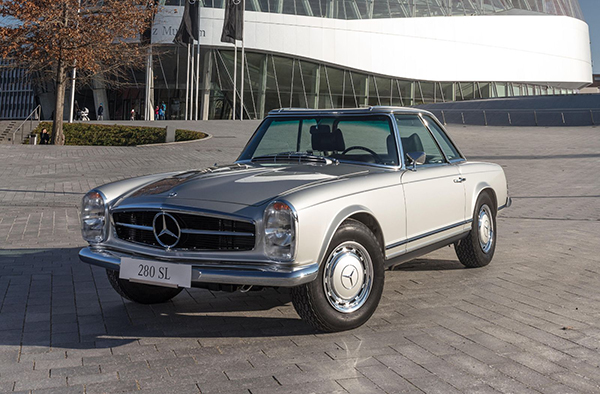 Apart from safety and performance, the W113 was a rare example of open-top practicality. Thanks to the slim design of its foldable soft top, owners could store a couple of full-sized suitcases behind each seat and the trunk space was similar to that of a mid-size sedan. Furthermore, with the optional “pagoda” hardtop, the roadster could be easily converted into a coupe, which meant that it could be driven daily regardless of the weather.

An instant success, the 230 SL was produced from 1963 to 1967 in 19, 831 units. In 1968, it was replaced by an improved version called 250 SL. Powered by a slightly torquier 2.5-liter M129.II, it featured stiffer springs, a higher-capacity fuel tank, disc brakes all around, and an optional limited-slip differential. It was a short-lived model that was produced for only a couple of years in 5,196 examples, which makes it the rarest member of the W113 family.

The last iteration of the iconic Pagoda was the 1967 280 SL. In addition to a series of safety improvements, this version came with the final evolution of the M130 inline-six Displacing 2.8 liters, It was rated at 168 hp and 180 lb-ft (244 Nm), figures that made the W113 even more impressive.

It’s also worth mentioning that out of a grand total of 48,912 W113s, close to 20,000 were sold in the US where it became one of the company’s most successful models.

Whether it’s cargo space, comfort, or safety, convertibles have always required some sort of compromise. However, the gorgeous Pagoda showed that a daily-drivable, no-compromise convertible is possible, and it did so nearly six decades ago.

Today, the groundbreaking open top is among the most collectible classic Mercs. An example in flawless shape like the one featured in the video below by Curious Cars demands well over the $100,000 mark. In my opinion, that’s still a small price to pay for one of the best convertibles ever made.