SLs with four-cylinder engines used to be a thing back in the day, and due to Europe’s stricter emission regulations, they have made a comeback. Meet the least powerful and exciting version of the new-gen roadster, dubbed the Mercedes-AMG SL 43. 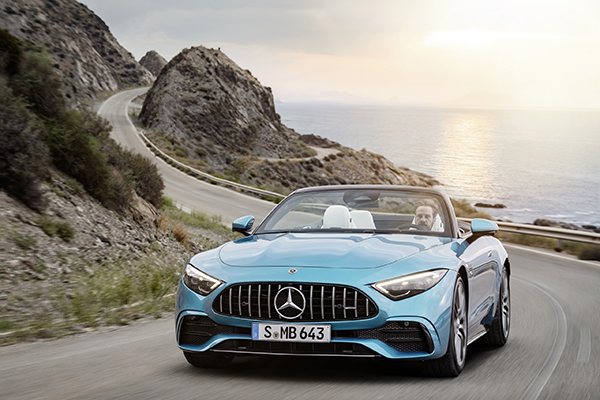 Just hours after dropping a subtle teaser image, Mercedes adds a new entry-level version of its elegant SL-Class roadster to the mix. The Mercedes-AMG SL43 literally offers half the engine of its siblings, swapping a twin-turbocharged V8 for a single-turbo four-cylinder. Of course, being a product of AMG, it’s not a typical four-pot. And it certainly doesn’t have half the power.

The big news for this version of the SL-Class is its M139 turbocharged 2.0-liter four-cylinder engine. Mercedes-Benz fans are familiar with this engine, but the boost comes from a single electric exhaust gas turbocharger. The technology is pulled straight from the automaker’s Formula 1 efforts, utilizing the same 48-volt electrical system that powers the starter-generator. In short, a very small electric motor in the turbo spins up the shaft up until exhaust gases take over. As a result, Mercedes says the engine offers “particularly spontaneous throttle response across the entire rev range” while also increasing engine efficiency. 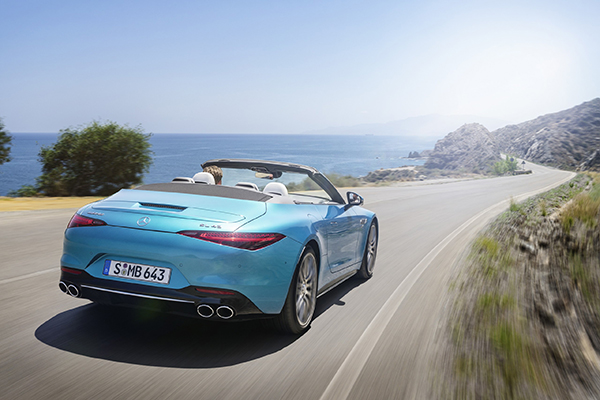 What does that mean for the driver? The SL43’s four-cylinder makes 381 horsepower (284 kilowatts) at 6,750 rpm. As for torque, you’ll get a stout 354 pound-feet (480 Newton-meters) starting at 3,250 rpm and holding steady to 5000 revs. The starter-generator system can also add an extra 14 hp (10 kW) for short periods, and yes, that technically makes the SL43 a mild hybrid. Shifting duties are handled by the familiar nine-speed MCT, sending power to the rear wheels only.

Punch the SL43’s throttle, and Mercedes says 0-62 mph (0-100 km/h) arrives in 4.9 seconds. Flat out, the entry-level SL will reach 171 mph (275 km/h). It may have half the turbos, half the cylinders, and half the displacement of its muscular siblings, but it certainly doesn’t have half the performance. Mercedes is also keen to mention the smaller engine means less mass up front, giving the SL43 its own handling characteristics. That’s further tweaked by lighter torsion bar stabilizers specific to this trim. 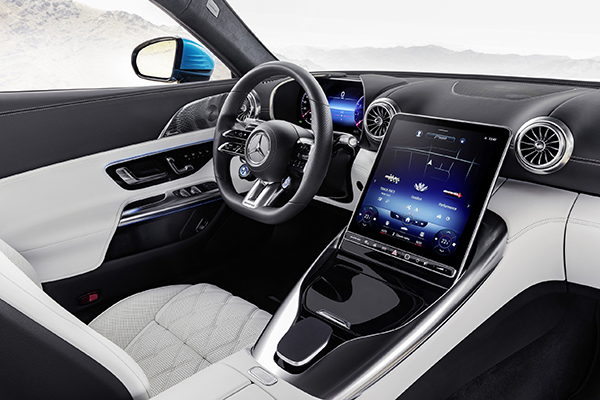 To the casual observer, the SL43 looks identical to the rest of the lineup. A keen eye will note small changes to the vents on the lower front fascia, as well as a smooth rear fascia devoid of vertical vents. The SL43 also trades square exhaust tips for oval finishers, and of course there’s SL43 badging. 19-inch wheels are standard, with 20-inch and 21-inch wheels optional.

Beyond that, you’ll still find all the cool SL features common to the SL55 and SL63. That includes available rear steering, numerous drive modes, the AMG Dynamic Plus Package, and a supremely luxurious interior filled with digital screens and the latest MBUX system.

Pricing and availability for the Mercedes-AMG SL43 will be announced closer to production.