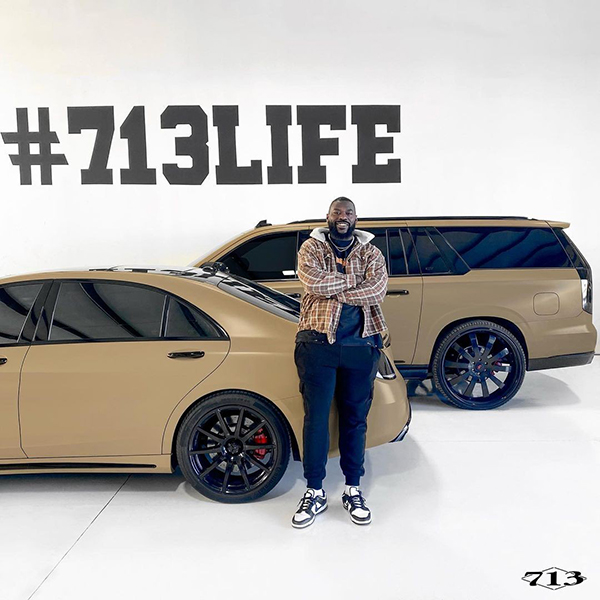 Luckily, he had Big Ash ready to help him out with the job. The famous car customizer, who goes by 713ab on social media, is the president of 713 Motoring, 713 Collision, and 713 Life. And he usually deals with the cars of the rich and famous who want an upgrade. Fulton was the latest one who stepped into his shop and brought his Cadillac Escalade and his Mercedes-Benz S-Class with him.

Fulton doesn’t seem to be one to show off his vehicles on social media, so we didn’t get to see how they looked before the makeover. But the result looks pretty great. The two cars received a Satin Desert Storm wrap by Kpmf, with chrome trim delete, replacing it with black accents, and executive privacy ceramic film. The result seemed to please Fulton, who jumped in the comments section, writing, “Yes sir.”

The current generation of the Cadillac Escalade is offered in two body styles, the standard and the ESV, with a longer wheelbase. It looks like the athlete opted for the former. As for its powertrain, the Cadillac Escalade ESV is available in both rear-wheel and all-wheel drive, with a 6.2-liter V8 and a 3.0-liter diesel inline-six. It’s unclear which of the engines he went for, but the top-of-the-line is the V8, paired up with a ten-speed automatic transmission, which puts out 414 horsepower (420 ps) and 460 lb-ft (623 Nm) of torque. And, naturally, the Cadillac is one of the vehicles that don’t miss from any celebrity’s garage.

When it comes to the Mercedes-Benz S-Class, the vehicle that Zac shows in the photo seems to be from the model’s sixth generation, produced from 2013 to 2020, the post-facelift version, which the German brand introduced in 2017. The athlete seems to have added some chrome accents to its taillights, too.

Fulton, who used to play in the National Football League, retired back in August 2021. He was drafted by the Kansas City Chiefs in 2014, with whom he played for four seasons. He later moved to the Houston Texans for three seasons, signing with the New York Giants in March 2021, a few months ahead of his retirement. Throughout the years he played in the NFL, over $22 million in career earnings went into his bank account. That is more than enough for him to have a comfortable lifestyle. And, obviously, that includes some guilty pleasures, like cars.