This will be the first Luggage Test of a flagship luxury sedan, so don’t expect much in the way of comparative analysis here. Even my time spent in the Mercedes EQS was down in Los Angeles, meaning I didn’t have the usual Luggage Test allotment to sample from. Nevertheless, I did fill up the trunks of both Mercedes flagship sedans, so you’ll end up with a decent idea of which one is better at hauling stuff. Cause, you know, I’m sure people were wondering. 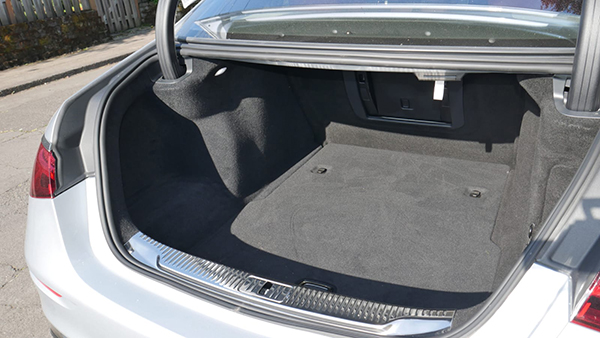 The official specs says the new Mercedes-Benz S-Class trunk measures 12.313 cubic-feet. That’s almost certainly a translation from liters into cubic-feet (we usually don’t see a lot of trunk volumes rounded to the thousandth), but that’s also an awfully low number for a vast limousine like an S-Class. In the luxury sedan realm, that’s barely better than the rather pathetic Cadillac CT5, and actually worse than most compact sedans. It can’t possibly be that much smaller than the trunk of a Hyundai Elantra. Can it?

You can see there’s quite a bit of wheel well intrusion and a weird hump on the left side behind the wheel that would likely impede placing certain items … such as a heads of golf clubs. That seems like something that could come up in an S-Class.

The opposite side is even with the rest of the trunk floor and has the usual pop-up net deal. This bag is the car’s tire repair kit.

There’s some under-floor storage, which is bit enough to maybe put two six-packs of cans. I think that counts as a hooch bin (TM James Riswick, 2021). 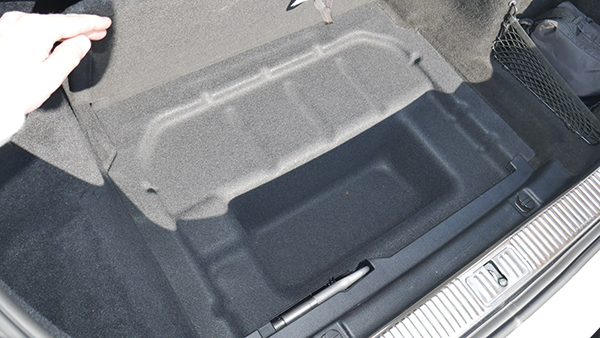 Here’s one area where the EQS is much better. You’re able to carry a lot more in its much longer, wider and deeper hooch bin. We’re talking at least 12 bottles of wine rather than 12 cans of beer. That’s pictured below. It also seems like something that might come up with an S-Class.

Alas, this is not the Booze Test. Onto the luggage.

So everything fit. Barely, as you can see by the slightly smooshed fancy bag. There’s a little bit of space left over above the bags on the left and in that flat bit behind the right wheel, but not that much more.

So yes, it does seem like there’s more in the Hyundai Elantra’s 14.8 cubic-foot trunk, and it would seem like those 12.313 cubic-feet is comparable to the measurements of most other sedans. I mention this because Mercedes has previously sold itself a bit short. 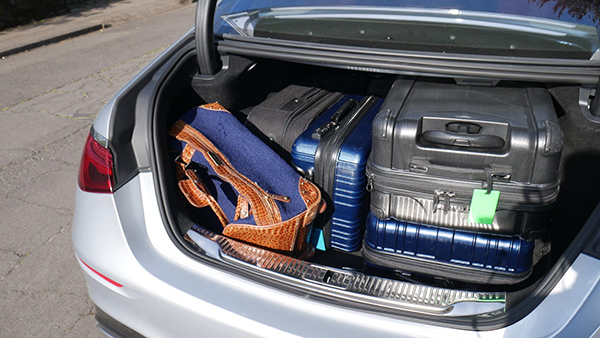 As for the EQS, here’s what you’re working with.

Besides having a vastly superior hooch bin, the EQS has a notably wider cargo area with fewer intrusions and obviously the enormous hatchback opening. On the right is my smallest roller bag plus the carry-on of Car and Driver’s editor-in-chief. I’ll make sure to ask Tony about its dimensions the next time I see him (note: I probably won’t do this).

I annoyingly didn’t take photos of the EQS trunk filled up, so above is a TikTok that shows how it did. That’ll just have to do.

So the S-Class trunk doesn’t have that swell hatchback, but there is this nifty little hook that drops down from the parcel shelf. Other Mercedes sedans have the same thing. So there’s that.

Otherwise, when it comes to cargo capacity, the EQS blows the doors off the S-Class. Back seat comfort definitely tilts towards the gas burner, though.