The recently launched W223 generation of the Mercedes-Benz S-Class must contend to displaying just a list of six-cylinder engines under its long hood, at least for the time being. A V8 (of course, with mild hybrid 48V assistance) and a plug-in hybrid are incoming, but for now, the S500 six-cylinder acts as the flagship version of the series.

When Mercedes updated the S-Class W222 in 2017, the S500 lost its V8 in favor of a newly developed inline-six engine with mild-hybrid technology. Its successor follows the same electrified recipe to further show downsizing and electrification go hand in hand in today’s world of increasingly stricter emissions regulations. Not to worry as the new S500 has plenty of punch when driven at full tilt on the Autobahn.

The folks over at AutoTopNL got their hands on a W223 and pushed it to the maximum on one of the remaining unrestricted sections of the German highway. Even without looking at the badge or that swanky interior, you can tell this is a high-end luxury vehicle by how quiet the cabin instantly becomes the moment he closes the door. 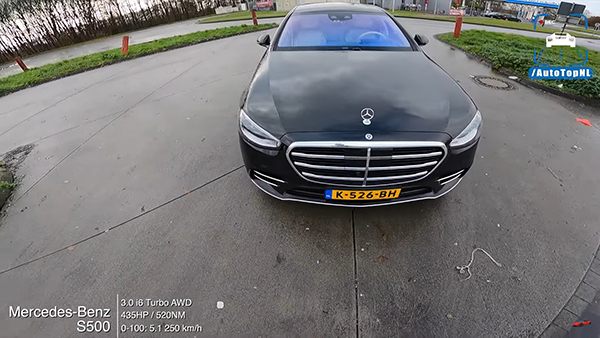 Then there are the smooth-as-silk gear changes of the nine-speed automatic transmission, while the soundtrack delivered by the engine is not too shabby for “only” a six-cylinder. The S500 gets a tad noisy as the virtual needle of the digital speedometer approaches 162 mph (260 km/h), but this still has to be one of the most relaxing ways to travel at that kind of speed.

Those in need of more oomph will have to wait for the AMG versions, but the V12-powered S65 is not coming back since only the Maybach S-Class will continue to use the twin-turbo 6.0-liter behemoth. Instead, we’re hearing there will be an electrified S73e with somewhere in the region of 800 horsepower or about 100 horses more than the forthcoming S63e. 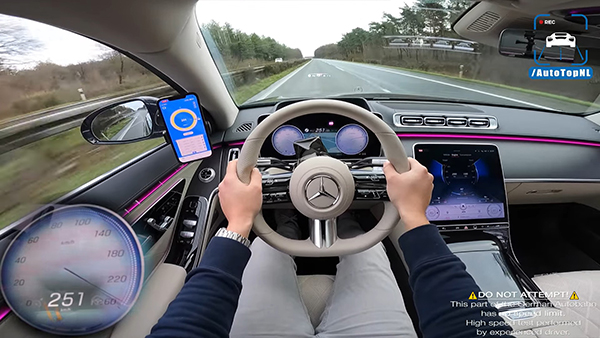 As nice as the interior looks in the video, those glossy black surfaces are likely prone to scratches and scruffs and therefore won’t age well. Then there’s the reflection of the central air vents on the windscreen, which could pose an issue for people with mild OCD. These are all minor niggles about the new S-Class, which has once again set the bar even higher for a tech-laden vehicle.

The W223 is a smooth operator and the type of car you’ll equally want to drive and be chauffeured in. It’s a bit sad the coupe and convertible are not coming back for a new generation, but the silver lining is the next AMG GT Coupe and the SL roadster are being engineered to fill the void left after the demise of the two-door S-Class.