Mercedes-Benz is once again turning the abandoned Ahlhorn airport into a massive parking lot. The problem is the same one that has plagued the auto industry since the health crisis started to impact automakers worldwide – there’s a lack of chips. These vehicles left the factory but can’t be delivered. Here’s what you need to know. 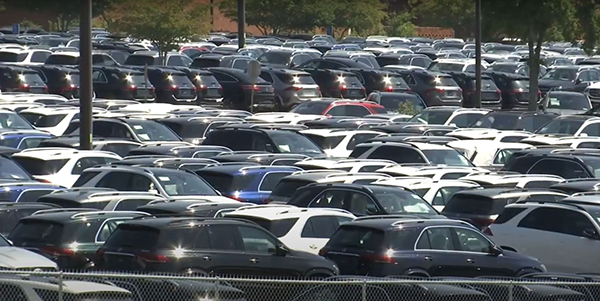 Recently updated Google Maps photos show thousands of cars parked on a massive runway that was once used by airplanes. Now, it serves as the place where Mercedes-Benz sends its brand-new cars for which it doesn’t have any chips. From the looks of it, the auto industry might soon be dealing with serious supply concerns once again.

Back in 2019, the German automaker used the same abandoned airport to park its cars that couldn’t be finished properly. Now they’re piling up again. Newer cars that have numerous features require many semiconductors. Without them, things like folding mirrors, expensive sound systems, or driver assistance features can’t work.

But we hoped things would change. We thought carmakers would sign the contracts needed for enough chips. Unfortunately, it looks like we’re returning to the same old scenario. Owners are once again forced to wait long periods for their vehicles, and Mercedes-Benz has to spend more money to haul all these cars from the Bremen factory to the Ahlhorn airport – that’s around 75 mi (120 km) for a round-trip.

According to buten un binnnen, a Mercedes-Benz spokesperson said there’s a global supply shortage of “certain semiconductor components,” but they remain confident in the fact that this is just a temporary situation.

New cars are also being introduced by the manufacturer. A couple of them need some fixing after they leave the factory. Not having a dedicated place to store them, these vehicles are also sent to Ahlhorn together with the models that don’t have the necessary chips in them. There, they enter a waiting period. On top of all this, there’s no parking space left at the Bremen factory.

But the Germans are not alone. Recently, another European manufacturer from France said they experienced chip supply issues. Renault decided, together with its Turkish partners, to temporarily close down a plant.

General Motors, on the other hand, underlined that the chip shortage will continue beyond 2023.

All in all, Mercedes-Benz is doing fine, and work won’t be stopped – for now. A union representative said production continues at a normal pace, and they project that the parts crisis will end, until 2023 comes.

We’ll see who’s right very soon. Until then, carmakers might be in a world of trouble – economies worldwide are slowing down while the production rate keeps growing. At some point, things might shift from “we don’t hold any stock” to “here’s a $10,000 discount, just buy it.”