We recently discovered a new patent filed by Daimler AG, owners of Mercedes-Benz. 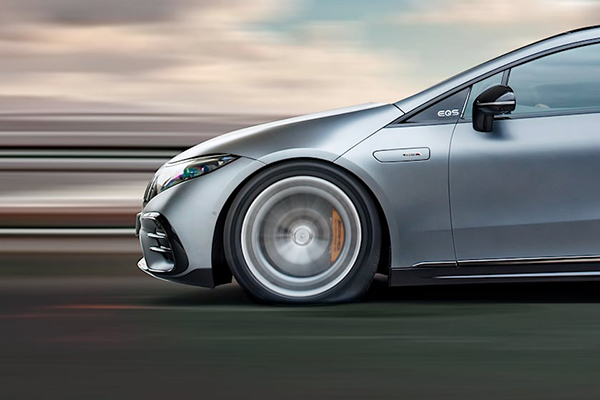 It’s a user-operated fallback braking device coupled with a valve that lowers tire pressure. In cases of emergency braking, the tires will go flat to help slow the car down if the braking system fails.

The system consists of a central control unit and an air pressure reduction unit connected to the vehicle’s tires. These two systems activate when the actuating central brake unit fails or has a fault.

The patent description mentions that this braking system was designed with pure electric vehicles and hybrids in mind but can also be used in a traditional ICE car.

The main reason for its existence is the switch over to new braking systems. Because electric cars use regenerative braking, they essentially have two braking systems. The primary method is effectively braking via the electric motor to regain energy. Once the batteries are fully charged, a car will switch back to the conventional friction-based system.

Because of the complexity involved, modern cars use brake-by-wire technology. The user interface remains the same, however. The driver pushes down on the pedal, and the car brakes. But now there is an in-between system that needs to decide how to use that braking power. The driver pushes down on the pedal, the drive-by-wire system records the pressure and decides which method to use to slow the car down.

If the drive-by-wire system fails, the results can be catastrophic. Ford recently had problems with six Mach-E models in Norway. The regenerative braking system kept on recuperating energy, overheating the batteries.

To work around this problem, Daimler came up with the new fallback system. It only comes into play when the actuator master unit fails or even has a simple error. In this case, the brake pedal is connected to the fallback unit, which is a basic friction system. The main new feature is the air release valve, which can reduce tire pressure.

Why would you want that in your car? Well, it’s beautiful in its simplicity. It’s the opposite of increasing tire pressure to the maximum allowed limit to reduce friction and fuel consumption.

A flatter tire has a larger contact patch with the road, increasing rolling resistance. It is a balancing act, however. Lower the tire pressure too much, and the tire can easily detach from the rim. It can also affect the handling characteristics of the vehicle.

Daimler thought of that, which is why the system is connected to all four wheels. Ideally, it would reduce the tire pressure in all four tires, but it will start with a minimum of one and work from there. After the tire pressure reduction, the car’s top speed will be limited, and there will be a warning system to let the driver know.

The system can also be used to build the pressure back up to the original level, though this particular aspect is not mentioned in the main claims section. Combined with a tire pressure monitoring system, a vehicle equipped with a system like this can regulate its tire pressure.

This is not the first time Daimler is using an onboard inflation system. The Mercedes-AMG G63 6×6 had onboard compressors that could be used to deflate and inflate the tires. It was a large and clunky system housed above the two rear axles.

The new system is much smaller, as can be seen in the sketches. Mercedes-Benz will be launching a host of electric vehicles in the USA, starting with the Mercedes-Benz EQS.