With one of the most luxurious interiors we’ve ever seen on the channel, the Mercedes Maybach Haute Voiture is true high fashion in car form. With a branded champagne set, expensive fabric interiors and some crazy features, it’s the kind of interior you wouldn’t ever want to leave. This is Mercedes Maybach at it’s most exclusive and most extra and we love it! Inspired by the kind of materials and patterns found on the most exclusive fashion catwalks, what’s not to love?

In May this year, at The Art of Creating Desire exhibit in Cote d’Azur, France, Mercedes put on display its most outrageous and outrageously decadent car ever, the Mercedes-Maybach Haute Voiture Concept. Though a concept, Haute Voiture is also a close-to-production unit for a 2023 limited-series model, which perhaps makes it even more outrageous. This isn’t a car made to be ogled on static displays, this is an actual functional vehicle that will be rolling down streets, and very soon.

On the same occasion, carfluencer Supercar Blondie got the chance to see the Haute Voiture in person, for a video that she posted to her channel the other day. The best preface for it would go something like this: if you thought the car was outrageous from photos and descriptions, it is even more so in person.

The video doesn’t offer new details about the concept from what we’ve already discussed, with the exception that two design elements (the rose-gold studs on the center console and the stripes on the back of the seats) won’t make it into the production unit. Supercar Blondie is taken aback by the amount of fake fur used inside, down to the door pockets, and in the tiny and unusable space behind the infotainment screen. Like many people, she wouldn’t personally opt for this much fuzz, but she appreciates the audacity of its use. 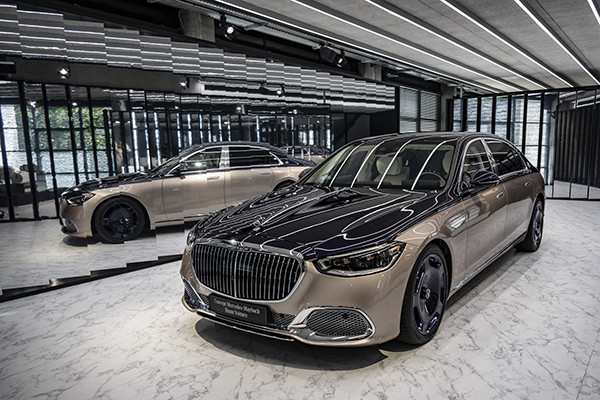 What the video brings new to the table is a better look at the concept. A photo is, indeed, worth a thousand words, but a video is much more eloquent. The combination of colors, the nautical blue and rose gold, both on the exterior and inside, the contrast between the striking white Nappa leather and the boucle, Chanel-inspired fabric, the lacquered dashboard with gold stripes and the matching backs of the seats, everything is even better appreciated in motion.

The Haute Voiture is not a car for everyone, and not just in the sense that it will probably cost a fortune. It is shamelessly glam because of its direct inspiration from the world of haute couture, so it’s designed for the kind of owner who aims to make a point of not being one of the people. It’s undiluted and unrestrained luxury, made to stand out and to be unapologetic about it. As you will see in the video, it’s a well-executed exercise in outrageousness.