Even a Mercedes-Maybach S 580 of the W223 series, which is almost a year old on the market by now, can feel just as fresh as the latest hot introduction. With a little help from a major aftermarket outlet, of course. For example, the good folks over at Hollywood, California-based RDB LA and RDB Wheels have abandoned for a second the Cullinan shenanigans in favor of something cool, something of the alleged Maybach S 680 variety.

So, after a series of exotic supercars that included stuff like a Ferrari SF90 Stradale, a Lambo Aventador acting all green and stealthy like an Army’s fighter car, or a wild full carbon fiber widebody McLaren 720S it came the perfect time for a huge Rolls-Royce premiere. This is because NFL star Jalen Ramsey asked them to cook up a two-tone widebody Cullinan of an incredibly special variety for him, and they were much obliged to do so.

The interesting story is that these good aftermarket folks will stop at nothing to fulfill the client’s request. In this Rolls-Royce case, the all-new 1016Industries widebody aerodynamic kit was not even ready when fitment and assembly started, so the aftermarket outlet’s crew ended up fabricating the rest of the details themselves. Plus, their brethren from RDB Wheels also took the chance to release their new RDB Signature ‘Aero’ wheels on the same Cullinan package!

But why are we telling you all this? Put simply, I now do not doubt RDB LA is capable of handling in-house the Maybach S 580 to S 680 impersonation they hint at with the latest social media release. You see, the hulking S 680 flagship cannot be had in the States too easily, so people do what they can to cope with that – for this owner, the solution was to have the S 580 fitted with chromed S 680 front grille slats and be done with it until someone else finds a better way to stand out in the posh two-tone limousine crowd. 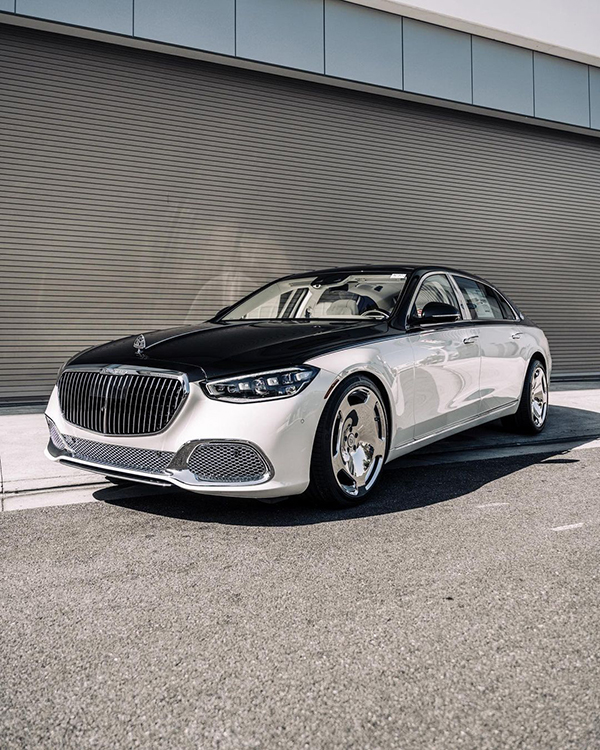 As for the rest of the changes, there are not so many to speak of, yet the entire package is attractively subtle. The two-tone styling is probably achieved from the factory – although it needs some work to it, given the way its top black paint abruptly meets with the white lower half at the headlights. But we are not here to reprimand Mercedes-Benz, and instead, we should note that this brand-new unit (which still has the window stickers during the photo and video sessions) had a few other tricks up its sleeve.

So, aside from the front chrome mesh upgrade and Maybach emblems, there is also a bright white interior to keep everything comfortably luxurious and serene. Plus, the latter bodes well for the other major upgrade performed by the aftermarket specialist – the fitment of RDB Wheels’ 21-inch Classic MBZ Style wheels featuring a high polished finish to shine brightly like a Maybach star in the sun. By the way, the aftermarket wheel provider says these are available for all makes and models, and complete with worldwide shipping.

Last, but not least, just like kids in the cookie shop, the RDB LA guys just could not help but emphasize – both on Instagram and YouTube (all the reels are embedded below, of course) the cool rear-axle steering. Indeed, it really is a trick that makes this ultra-luxurious, humongous limousine feel just like “any other regular” Mercedes-Benz. Impressive, to say the least, especially since it turns out that making an S 580 stand out in any crowd is just a matter of a few subtle customization ideas – but only when the proper aftermarket outlet takes care of them.