With our recent trip to South Carolina to test drive of the updated BMW X7 still fresh in mind, we found it rather serendipitous that a Mercedes-Benz GLS-Class would land in our driveway. With keys to a GLS 450 in hand, we were eager to see how the Merc SUV would stack up. Comparing the two German powerhouses is not as straightforward as you’d think; both are big, three-row SUVs with six-figure price tags, acres of leather, and plenty of tech. However, the Mercedes starts on the back foot as BMW has just refreshed the X7 for 2023. Mercedes is sure to respond, but keep that in mind as we take you through our time with the GLS. 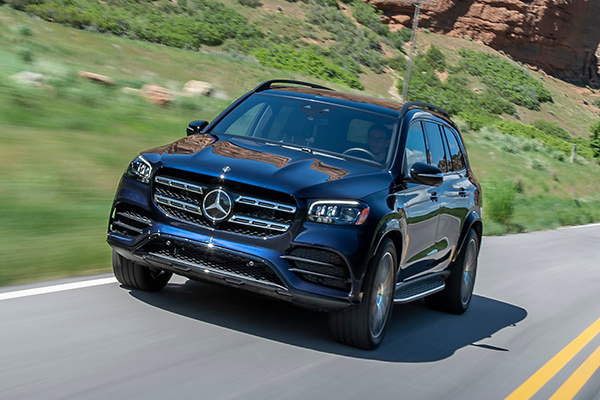 Diving straight into the numbers, our GLS tester totaled $96,220 with options – a fair bit higher than the entry X7 xDrive 40i. That starts at $77,850, though the pre-production X7 was specced to the equivalent value of around $100,000. Should Mercedes update prices for the 2023 facelift, we imagine these two will be separated by the slimmest of margins.

Our white GLS tester seen here came with some key upgrades over the stock model, which has a starting MSRP of $77,850. Add-ons included the AMG Line package, which equips AMG body styling, brushed stainless steel pedals, and 21-inch AMG wheels for $4,350. The $1,950 Driver Assistance Package includes adaptive cruise control and a suite of safety features. Also equipped was the Acoustic Comfort Package ($1,100), which keeps things quiet inside the cabin.

Likely due to supply chain shortages, our car’s price tag included a $200 credit for a missing wireless charger that should have been standard. Of the optional extras, the AMG Line package certainly helps bolster the GLS’s looks, setting it apart from the competition.

Exterior: Luxury By Goldilocks
When comparing the X7 and the GLS, exterior looks are a win for the GLS in our book. Where the BMW shouts, this car whispers. Mercedes has long had the formula for SUVs down pat, and before Mercedes refreshes the GLS, we’d like to appreciate it for what it is.

The lines on the GLS are clean and elegant. The wheels are 20-inch items as standard and similarly understated. We have a feeling the manufacturer knows you’ll recognize this car when you look at it, so the design doesn’t have to shout about it.

You can park the GLS in most places without drawing attention, but that’s not to say it isn’t a looker. The SUV is particularly attractive from the three-quarter angle, and while the grille is the least understated aspect of the car, it does announce the GLS in a classy way. In all, no notes, and point: Mercedes. 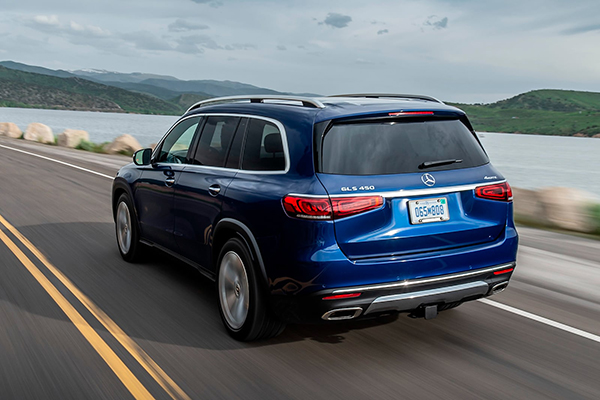 Performance: Understated Speed
The GLS is pretty quick, considering its overarching character traits relate to it being large. With 362 horsepower and 369 lb-ft of torque, its hefty 5,400-odd-pound curb weight doesn’t stop it from reaching 60 mph in under six seconds. The GLS rockets away from the lights; the upcoming AMG version will naturally get the school run done faster, but the X7 beats the GLS to 60 mph one-tenth quicker.

The 3.0-liter motor is turbocharged and has mild-hybrid drive, and the gearing of the 9-speed automatic complements the setup well for smooth power delivery. Still, it’s no performance SUV or sports car, and the GLS does a fine job of quietly whisking you along while pulling some respectable fuel economy figures. Merc claims 20 mpg combined, and on our slightly highway-heavy week with the car, we managed 22 mpg without touching eco mode.

Of course, the GLS is AWD, just like its competition. Mercifully, the snow hadn’t set in when we tested the car, but the all-wheel traction would definitely be beneficial in such conditions. Regardless, the GLS’s mechanical bits meet the brief for the luxury SUV to ferry passengers with poise and confidence.

Driving Impressions: Soft And Pudgy
While the S-Class Sedan is undoubtedly the peak of the Mercedes luxury mountain range, the GLS manages a fine impression- in a vacuum. Again, we have to consider that the GLS is facing down an updated BMW X7 here, but that doesn’t stop the experience from making us wonder what Mercedes will need to change when it updates the GLS.

Still, this car drives like an S-Class on stilts, which is to say better than the vast majority of cars on the road. First, there’s the ride comfort. The GLS’s suspension works to isolate you totally from anything on the road, as any good luxury car does. But it’s the GLS’s ability to shake off larger impacts that impressed us the most. A killer ride is a must at this price point, but the GLS is able to shrink pothole impacts to a soft “whump.” The cabin is quiet, too, which augments the cushy ride quality perfectly.

Mercedes even manages a nice blend of sporty and soft in the different drive modes, and we found ourselves changing things up with the drive selector more often than anticipated.

The GLS is more athletic than we anticipate, and we appreciate the steering feel more here than in the rival BMW. The GLS’s steering manages to capture road texture without undue harshness, which is a very apt summary of how the GLS drives. This is the GLS’s modus operandi. On the highway, the car is not so isolated from the outside world that you won’t notice a semi-truck passing by your window, but the same truck won’t be a disturbance when it does. Around town, a de-catted and lifted F-250 won’t disturb you, either.

The tech in the GLS is also generous, but the optional Acoustic Comfort Package, which includes lamenting on the windows and additional sound insulation, is a must for those who prioritize serene driving. There’s a slew of safety features that come standard, too, with Mercedes’ ADAS being one of the best suites on the market. It includes basics such as lane-keep assist, adaptive cruise control, blind-spot monitoring, attention assist, a surround-view monitor, and more – in our time with the GLS, the ADAS suite never put a foot wrong. 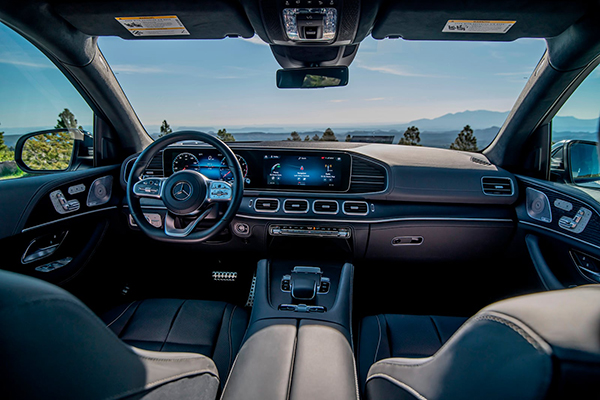 Interior: Mercedes’ M.O.
The interior of the GLS is a classically Benz experience – if you’ve driven one in the last few years. It’s safe to say that the interior is high up there among the most important aspects of a luxury car, and the GLS ticks the boxes for comfort, opulence, and tech wizardry. In terms of the former, all the seas in the GLS are supremely comfortable and extensively adjustable where it matters. However, we feel the Europeans can’t hold a candle to the ventilated seats found in Stellantis products.

In terms of infotainment and other tech, we feel that it works really well in this application. The Burmester sound system is fantastic, with excellent clarity although we feel it may be a little lacking in the mid-range. We prefer this system to the X7’s sound system, though that setup has the wattage to out-loud the Merc. Mercedes is still the undisputed king of the ambient light game, in our book, though. No one does it better than Benz, and we love playing with the system every time we hop into a Merc. And, call us crazy, but we prefer the dash layout to the Hyperscreen in the EQS, and still prefer MBUX to other infotainment systems in the business.

As with many cars at this price point, A and B touchpoints are covered in leather, and if not, they are generally metal or some other high-quality material. Mercedes does lag a bit behind the updated X7 here, as we preferred the hide in the BMW, but the finer touches on the Mercedes somewhat make up for this. The open-pore wood is lovely, and the controls still feel nice despite the fact Benz has been using the same climate control stack for an age. If it ain’t broke, as the saying goes.

However, for six figures, we expect a little more luxury in the rear two rows of the GLS. Third-row forgetfulness is common in even the most expensive SUVs, but we feel Mercedes could’ve made a bit more effort – there just was not a lot going on in the rear seats, save for some climate controls.

Verdict: Bring On The Facelift
So, where does all this leave the GLS? As things stand, the BMW X7 is the three-row luxury SUV of the moment. Differences in pricing aside, BMW’s LCI has brought the X7 ahead, leaving the GLS behind in terms of comfort, tech, and usability.

Of course, there are still high notes because, frankly, the GLS is still very good when viewed in isolation. The Burmester sound system, for example, is a literal high note. So is the ride, MBUX system, and Mercedes’ lighting. And if you care about aesthetics, Mercedes does a better big and brutish SUV that still looks elegant. The X7 might be good, but it’s not particularly handsome.

If anything, we’re excited to see what Merc’s answer for the X7 will be. The GLS is a fine product, but it’s time for an update and we expect changes that will bring it more in line with this SUV’s biggest competitor.