Sometimes the shortest route is far from the best, and Mercedes-Benz’s imposing GLS 580 is shining proof of that.
It’s been a while since we last took the drive from the City of Gold home. So we planned the thousand-mile trip a little differently this time around. There’s no way we could even consider a cannonball-like high speed run like we used to in the ’80s. Times have changed — everything is different now. Never mind, it’s not clever to take the main road at this time of the year. When they say it’s hell out there, that route pretty much defines the phrase. 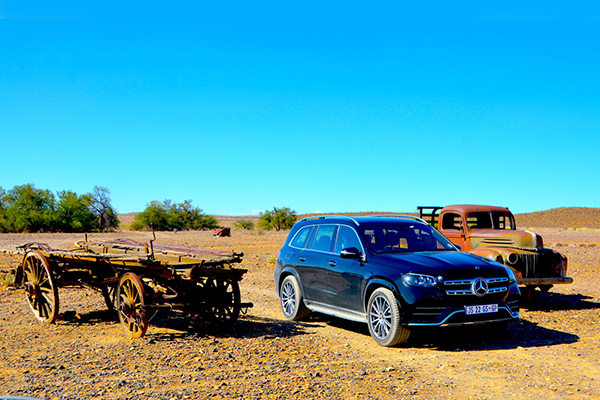 What Better for the Long Road than a GLS 580?
I’d also never seen some of the attractions along the alternative route, so we said what the hell, let’s take the long road home. Best of all, we’d lined the S-Class of SUVs up for the trip. In fact there could be little better than the latest, new for 2021 Mercedes-Benz GLS 580 4M for our journey.

Armed with the lap of luxury we plotted our trip — down South Africa’s N12 alternative route and on to the R62, rather than the mad N1. Both car and route proved an inspired choice. So we topped the Benz’ 26-gallon tank up Monday morning and set off southwest through the Goldfields to Potcheftsroom and Klerksdorp — mining towns that have provided the world with much of its gold.

Traffic was relatively thick, which allowed a little time to ensconce ourselves in the nuances and pedigree of our ride. They say that the big Merc SUV combines modern luxury with the character of an off-roader. That it blends design and capability with classic Mercedes luxury and elegance. They’re quite correct. GLS 580’s business class cabin is the synthesis of the modern, luxurious aesthetic. I’d happily concede that it benchmarks modern SUV practicality, tech and ability. 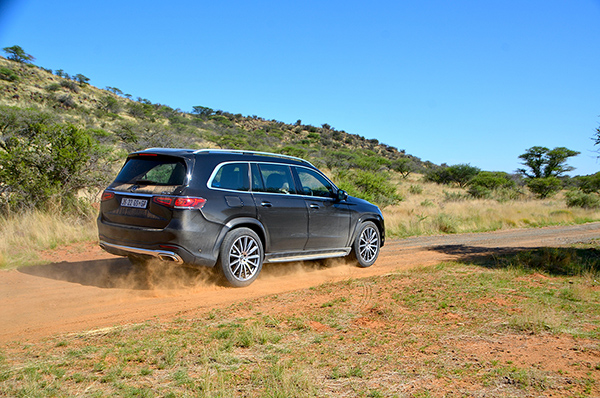 It’s Called the S-Class of SUVs for Very Good Reason
Mercedes-Benz has been building premium Sport Utility Vehicles since it invented the genre with M-Class in ‘97. Since then, SUVs have become a key pillar in the Mercedes brand. Benz introduced the original full-size seven-seater GL in 2006. That car was facelifted and re-badged GLS in line with Merc’s new naming convention in 2015. When it placed significant emphasis on luxury in its second generation large SUV.

Completely renewed for 2021, Mercedes calls the GLS ‘the S-Class of SUVs’ for very good reason. This GLS 580 now tops the Mercedes-Benz SUV lineup. It sits above the GLA, GLB, GLC and GLE (nee M-Class), and alongside the G-Class and Maybach GLS in the range. Merc’s largest and most luxurious SUV is now more spacious, more comfortable and more luxurious than ever. Its powerful and imposing off-road looks deliver the expected agile handling and quite incredible off-road capability. 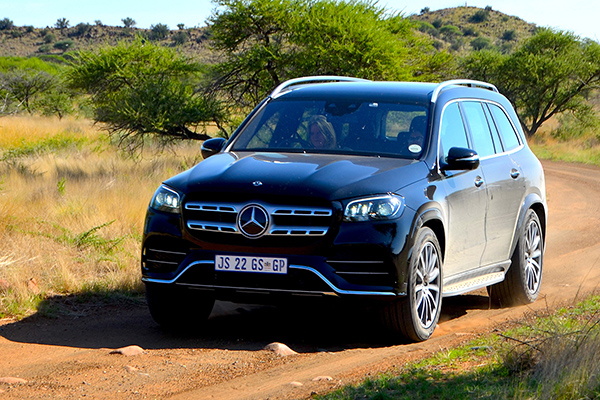 All of which makes an imperious poise on the road. That much is clear by how graciously even truck traffic moves over as you approach from behind, allowing you to effortlessly power on by. Beyond those Towns of Gold, the N12 takes to the vast plains of the Western Highveld.

With the traffic all but gone, it was time to revel in GLS 580’s all-new electrified 483 hp 516 lb-ft four litre biturbo petrol V8. Benefiting an integrated 48-volt starter-generator for the first time for an additional 21 hp and 185 lb-ft ‘EQ Boost’ on demand, I was impressed to note that we could quite happily manage the 580’s claimed combined fuel consumption at around 18 mpg. Running on cruise control much of the time, it has huge grunt when you need it and I was loving the trip. 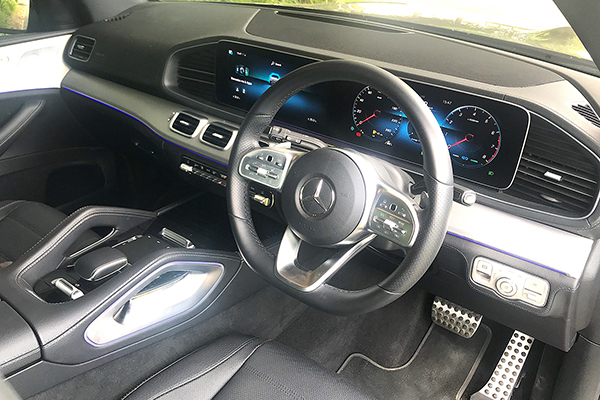 Into the Desert, GLS 580 Just Got Better and Better
We soon breached the Vaal River and headed to a different mining town. 350 miles down the road, we drove through Kimberley past the Big Hole. Neither pretty or easy to navigate, it’s still the most significant diamond town in the world today. Beyond Kimberley, the scenery started to change as we headed toward the semi-desert of the Northern Karoo.

GLS 580 showed off its 9G-Tronic automatic gearbox on those open plains. Its broad spread of ratios brings a perceptible reduction in engine speed to benefit both ride comfort and efficiency. And it’s backed up by an excellent 0.32 cd aerodynamics for its segment. Quiet and serene on the road, we were left to stream music as radio reception became, well challenged out there.

Just before Hopetown, we turned off the main road and headed onto the smooth dirt toward our first night’s accommodation on the banks of the Orange River. It’s only once you leave the asphalt that you start to appreciate the true strengths of this car. GLS 580 comes standard with Airmatic air suspension system and Adaptive Damping System Plus. It adapts to prevalent road conditions to ensure ultimate ride comfort while maintaining a level tack, regardless of the load on board. 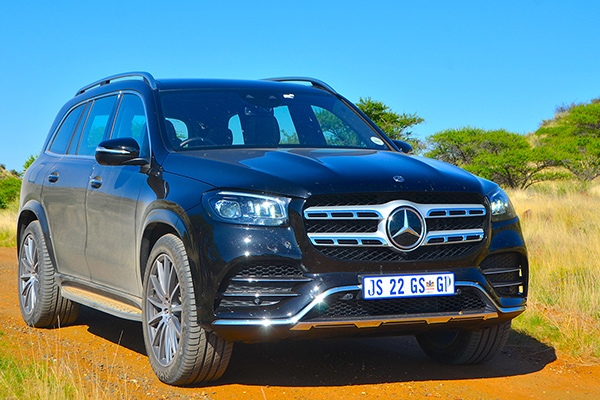 More than Just a Little Propaganda
Now that sounds like a fine piece of propaganda, but on those often corrugated dirt roads that tend toward the sandy, the big GLS basically negates all that. It delivers a sublime ride, whatever the conditions.

Our directions brought us to a farm gate where Innocent awaited to guide us to our riverside lodgings. I knew we’d come in the right car — Innocent was armed with a Land Cruiser truck.

He needed it as much as we did the GLS 580, which once again made even that venerable Cruiser seem to struggle as we traversed some quite challenging tracks. Unlike the ‘Cruiser and most other 4x4s in which you feel like you’re falling off the earth in more extreme challenges, the GLS drives across it all just as well as it does on the freeway…

It was all well worth it though. Our little river lodge looked out west to the sunset which was soon followed by the sickle moon chasing romantic Saturn and Jupiter down over the horizon. The end of a perfect first day’s travel. 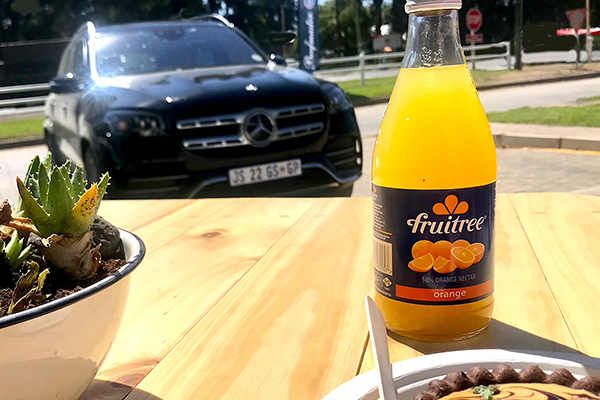 Orange Juice in Orania — Another Bucket List Tick
Next morning, we set off reasonably early and again easily over some tricky off-road obstacles to finally see something we have long wanted to for ourselves. There’s a little village on the banks of the Orange called Orania — it’s the considered the last bastion of the white Afrikaner, or Boer. Allowed by the South African constitutional right to self identity, it’s pleasant place visited by all kinds of people, who are happily welcomed from all around the world.

I’d always wanted my orange juice at Orania. And I left impressed by the community getting on with its daily rote. Back on the tar, the ladies nodded off as I watched the outside temperature gauge steadily soar beyond 105 Fahrenheit. Not that it made any difference at all in my little cocoon. Well, not so little actually. There is so much space inside the GLS. 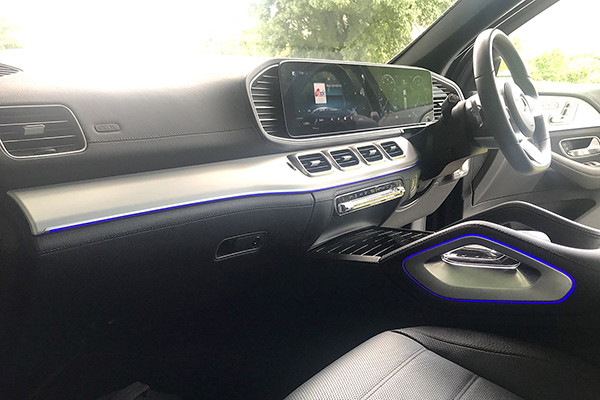 Bigger, Better, More Spacious and More Luxurious Too
This new GLS gets 2.4-inches extra wheelbase among its several additional dimensions. They promise that extra length especially benefits second row passenger space. All of which also contributes to GLS’ supreme versatility too. All five fully power adjustable second and third row seats can be lowered flat into the floor at the touch of a button, for instance. That increases boot space to a delivery van-like 85 cubic feet. Not that the remaining boot with all seven up is small.

The fully fledged third row seats also comfortably accommodates six foot-four tall passengers. Not that we needed that — we took advantage of the power down third row to make space for all Little Marcella’s new thrift stock over and above our regular baggage. We did find it odd that only a short extendable load bay cover is supplied to cover the smaller gap and the extra long cover locators behind row 2 are blanked off. That leaves load bay and its contents exposed with the third row down…

Our GLS however pampered our plus-two passenger with a Rear Comfort Package plus. That adds luxury head restraints with additional cushions and a rearward-extended centre console between the front seats with cup holders. It also has a removable 7-inch MBUX touch control Android tablet in its own wireless charging docking station in a larger second row armrest. The driver can however override all passenger controls at any time. If he or she must! 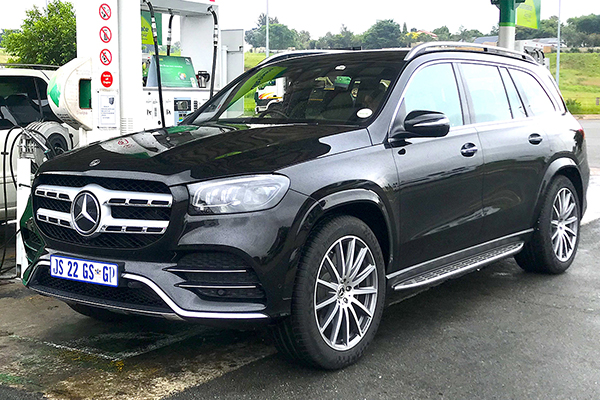 It Drinks What Mercedes Says it Should
We finally refuelled at a clean little station in a pretty little place called Britstown after 500 miles of motoring. The 580 pretty much mirrored its consumption claims in the real world. Further on, we joined the dreaded N1 for half an hour. It was enough. And later on we pulled in to the hamlet of Prince Albert for our second overnight. Not much happens there. But they have a few good restaurants. And a cool theatre. 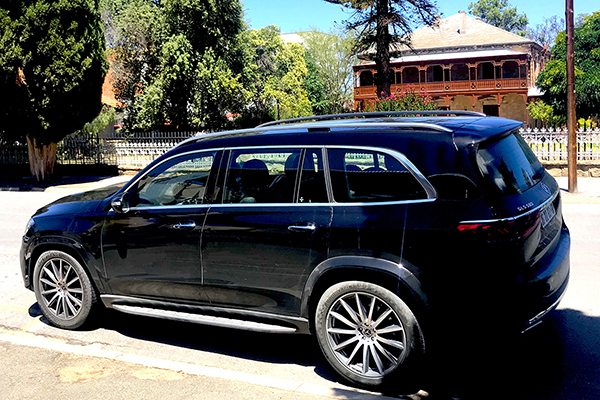 A Driver’s Road Brought the Best Out of GLS 580
Up and away early next morning, we stopped for a hearty breakfast at Oudtshoorn. Its claim to fame is a different kind of treasure to the gold and diamond towns we’d passed through so far. Ostrich feathers. It’s also driver’s road home form there, which played to several more of GLS 580’s strengths. So I incurred a little passenger wrath as I allowed myself leeway to explore this fine chassis a little.

As much as it shrugs the challenge of 4×4 driving off as it is not there, the GLS 580 also totally defies its size and mass if you feel the need for a little spirited motoring. Fast, powerful and splendidly responsive this 580’s electric assistance makes power delivery seamless too. It’s also well stacked with all the right stuff, should you be so inclined. Like new Distronic following with route-based speed adaptation that even recognises and responds to tailbacks before you even know they are there. 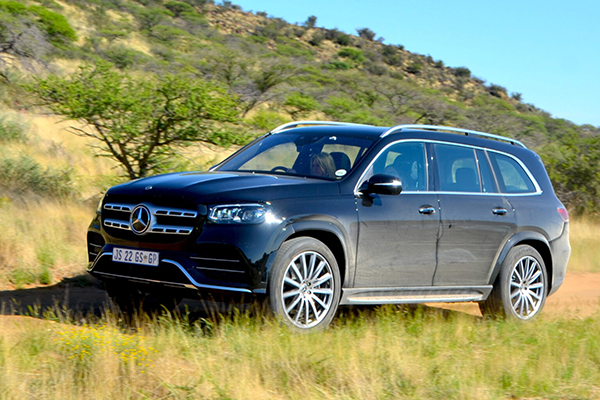 Star Wars Thrills. And Spills
I am a fan of Mercedes’ MBUX Infotainment. Yes, the My Mercedes voice command is good, but there are better. And gesture control is a hoot to use. But it’s too sensitive when you are Italian like me. The best of MBUX however has to be the GLS premium level Star Wars dual dash and infotainment. And how that all works via the multifunction steering controls.

Those intuitive little touch pads and well figured buttons allow you to seamlessly paddle through the many functions on both the dash and infotainment screens, to monitor your progress, fuel use, where you are going, make hands free calls, play music, the radio and much more. Although I’d be happier with a little more direct control to the likes of station or playlists, rather than delving into layers of windows to find those basic functions.

Like most Mercs these days, the GLS has wireless smartphone charging and more than ample USB ports. Pity they’re only smaller ports — and a compromise considering that most folk still use more the bigger plug old USB accessories. Only Merc and Mac do that…

Measuring the Trip
So, three splendid days of travel later, we trundled over my pass into our little valley thoroughly impressed with and most satisfied by the Mercedes-Benz GLS 580. I took a little time to put it to the test before they fetched it — as you can see below. Our journey into the relative unknown will be a road trip we will long remember for all the right reasons.

And yes, we ticked off a few notable bucket list items off. Not least of all experiencing this supreme motorcar at its very best.