Mercedes-Benz GLS sits near the top of the automaker’s portfolio. It’s big, powerful, and luxurious – all the ingredients needed for a modern Mercedes. AMG offers its take on the beast, putting an inordinate amount of horsepower under the hood, but that’s not enough for some.

Aftermarket specialist Brabus offers the GLS with its own upgrades, adding even more power to the AMG-tuned SUV. A new video from AutoTopNL puts all that extra power on full display by blasting it down the German Autobahn at over 124 miles per hour (200 kilometers per hour).

The twin-turbocharged 4.0-liter V8 makes 612 horsepower (456 kilowatts) and 626 pound-feet (850 Newton-meters) of torque in its stock configuration. However, with the Brabus upgrades, the Mercedes engine produces 800 hp (596 kW) and 737 lb-ft (1,000 Nm) of torque. The SUV receives improved turbochargers, a high-performance exhaust with actively controlled valves, a tune, and other goodies to increase its power.

All that extra power translates into improved real-world performance. The SUV can reach 62 mph (100 kph) in 3.8 seconds instead of 4.2. The SUV’s top speed increases from 155 mph (250 kph) to 173 (280 kph), too. Brabus electronically limits it. The video shows the SUV reaching 162 mph (261 kph) in fifth gear even though the gearbox is a nine-speed automatic. 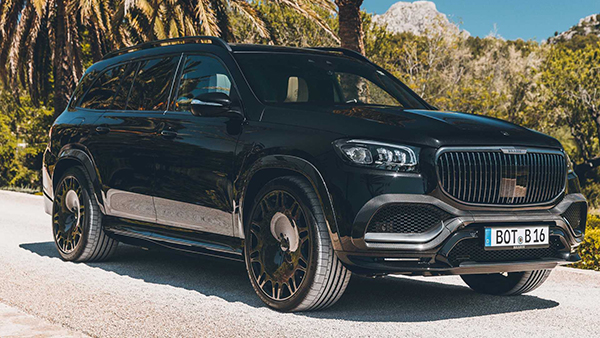 It’s not visible in the video, but Brabus spruces up the GLS’s exterior, giving the SUV unique 24-inch wheels and a lowered suspension. The aftermarket specialist also added a new front spoiler, rear diffuser, and badging. The cabin features a leather interior from Brabus, carbon shift paddles, upgraded trim, aluminum pedals, and more.

The big, beastly SUV sounded exceptional in the video above, the upgraded exhaust making itself heard as the shifts blipped off, and the GLS accelerated down the German Autobahn. Brabus’ upgrades show that AMG’s already quick and potent SUV hides even more capability under the SUV’s subtle sheet metal. The AMG GLS is already a beast, and Brabus turns it into a monster.