When the GLS was first revealed, the marketing spiel that came with it pinned it as the S-Class of SUVs. But, since then, the S-Class has seen a new generation, and the competition has been refined or refreshed entirely. 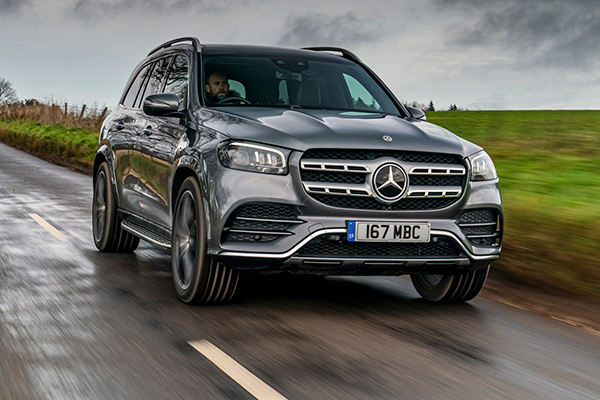 In essence, the GLS is a stretched and widened GLE – and it promises to feel comfortable on the road, competent off it and flashy enough to grab you a front-row space in the valeted car park.

What GLS models are in the UK?

Technically, three variants here. Just one (arguably) conventional model remains – the 400d – as well as an AMG and Maybach versions. The 400d is the one most will buy, providing 325bhp from a straight-six diesel, with the fire-breathing AMG version putting out 604bhp. All versions are mated to a nine-speed gearbox and deploy their power to all four wheels.

What you get for your £85k entry price is a BMW X7, Range Rover Sport and Audi Q7 rival. With the Merc, it’s all about glitzy opulence mixed with some G-Class utilitarianism; the exterior is curvy and trimmed with the trad SUV additions like chrome side steps and body cladding, while the cockpit has thickly padded seats and wood panelling and the brand’s huge MBUX display. Think game room in a listed building.

Material quality is good, if not brilliant – there were a couple of errant creaks in the dashboard on our test car – and the actual layout of all of the switchgear took some time to get used to. Even with many of the car’s myriad bits of technology (massage seats, the brand’s Energising Comfort suite and even a digital TV tuner) having controls housed within the MBUX system, it’s still a bit much. 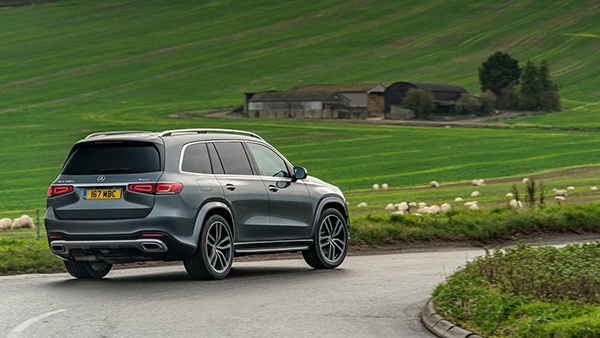 Let’s start with the engine, as it’s really rather sweet. There’s enough power to deploy, as the GLS almost eggs you on to ride the enormous torque wave that’s available from a down-to-earth 1200rpm. It’s fast enough to keep up with the competition, too and, while it’s not the most emotional soundtrack, the straight-six diesel remains quiet even if you give the throttle a proper prod. It also seems Merc’s economy claims are about right – long-distance cruises saw around 30mpg returned.

In terms of how it drives, that’s where the GLS definitely tries to prioritise comfort rather than dynamics. Every GLS has air suspension as standard, but the regular GLS400d we tried does without Merc’s E-Active Body Control – a suspension system that includes active anti-roll technology, as well as the ability to tilt into corners.

At a motorway cruise, it’s comfortable and smooth for the most part. But at lower speeds, and due to the whopping 23-inch wheels on our test car, the big SUV felt unsettled on the road more than it really should be. At low speeds, the big wheels (and their lack of sidewalls) fight against the air suspension’s efforts to keep intrusions in check. The GLS is also rather roly-poly in the corners, as you hold on for dear life if you’re a little brave with your entry speeds.

Serious off-roading requires the optional low-range transfer case and the pneumatic ride height adjustment device which lets you dial in up to 90mm of additional ground clearance as part of an off-road pack. 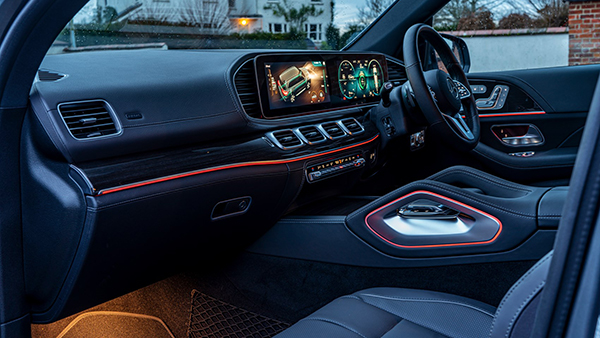 Mercedes GLS: verdict
Overall, it feels like the GLS plays third (or even fourth) fiddle when you compare it to its closest competition. The Q7 feels better built than it, while the X7 also feels tighter inside and is sharper to drive as an additional benefit. And then there’s the new Range Rover Sport – while we haven’t driven it at the time of writing, our early experiences point to it oozing more prestige than the Merc.

Merc’s priorities of comfort and technology do it plenty of favours, making it a commendable motorway mile muncher for one. If you are into big SUVs than can seat seven, tow a yacht and impress in front of the golf court´s clubhouse, for example, the new GLS may be worth a second look. But if you’re after something that feels more athletic to drive or provides a little more in the way of restrained luxury, the Merc’s sums don’t quite add up.